“We are desperate”: Covid-19 grant beneficiaries still hope for a reprieve

“We really need this grant, as small as it may appear” 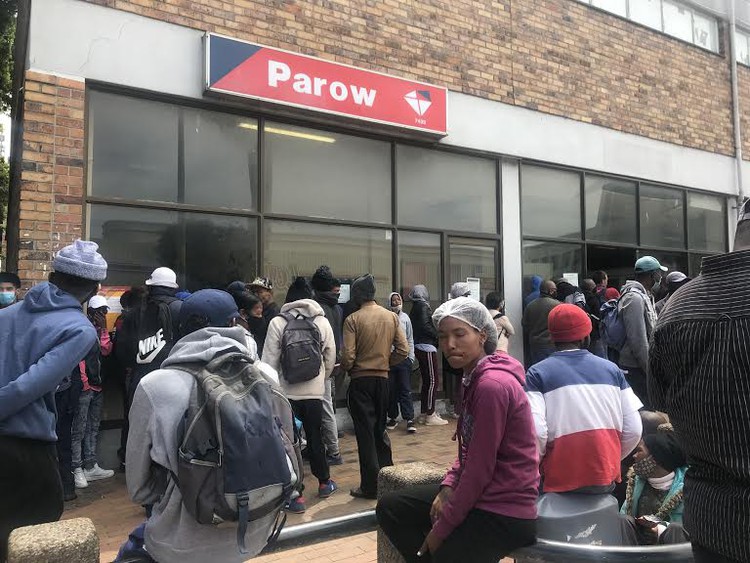 Beneficiaries of the Covid-19 grant queuing in Parow today. January payments are still being made but the grant came to an end on 31 January. Photo: Tariro Washinyira

“We are desperate and we really need this grant as small as it may appear.” Waiting in the queue at the Parow Post Office in Cape Town on Monday, Neville Lucas De Koker says life has been hard for him, his 13-year-old daughter and his pensioner mother since he was retrenched by Shoprite last year because of Covid-19. He believes taking away the R350-a-month Covid-19 grant from the unemployed will push them into crime.

“When people have nothing to depend on they can do all sorts of things to put food on the table … so the government needs to think again about the matter. Instead of stopping the grant they need to increase it to at least R500 so that we can buy basics that last us a month,” said De Koker.

“If I collect the money today I will buy school stationery for my child.”

The South African Social Security Agency (SASSA) on 28 January said new applications for the grant would be closed from 1 February 2021, but January grants would still be paid out. People who had applied in November, December and January and whose applications had been rejected would be able to apply for reconsideration until 28 February.

Beneficiaries from Delft, Bishop Lavis and Mfuleni travelled to Parow Post office on Monday hoping the collection queue would be shorter. At midday people who were tired of standing in the long queue sat on the ground. Most wore masks but there was no social distancing.

20-year-old Esly Fontein from Delft said he is the only one who was working in his family before a construction company retrenched him last year. “The R350 is of great benefit to us and I am grateful. At home they are expecting me to bring back groceries and school items from this money. I wish it could be increased a bit.”

“Taking the R350 away from my family means we will struggle again and probably die of hunger because there is no work out there.”

A man and a woman who did not want to give their names were standing in the queue with their small child sitting on the man’s shoulder. Both are getting the grant and they say it is their only source of income. “Waking up without this grant will break us down because how will we live? What will I buy soap and electricity with?” said the woman.

Jacqueline Ruiter from Gelvandale was queueing at the Korsten Post Office in Port Elizabeth. “I arrived here at 3am and there were only ten people on the queue. They were sleeping on the floor on pieces of cardboard. Now it is 1:40pm and I don’t even have a ticket because there are dozens of people in front of me who have bought the space.”

“There is no food at home and my children are very hungry.”

Ruiter was one of several people in the queue who complained that places in the queue were being sold for R50. “Those who have money just buy their way to the tellers. But I will wait until the post office closes; maybe I can be lucky and get a chance,” she said.

Next:  Nearly all excess deaths are due to Covid-19