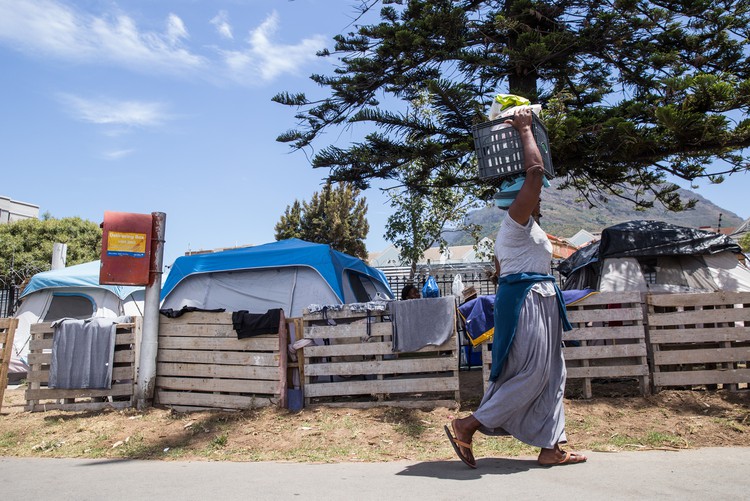 The City of Cape Town has been trying for a year to evict about 30 people from vacant land in Observatory. Archive photo: Ashraf Hendricks

A “year from hell” for the residents of Singabalapha (We Belong Here) informal settlement in Observatory, Cape Town, has come to end with a judge ordering City of Cape Town officials to stop trying to evict them without proper court processes.

On Tuesday, Western Cape High Court acting Judge Selwyn Hockey also interdicted the City from confiscating property, harassing or abusing the community of about 30 people, who had set up home on grass near the vacant Arcadia Place old age home from which they had been evicted in October 2019.

Hockey said the City was “abusing bylaws” to circumvent the provisions of PIE (the Prevention of Illegal Eviction and Unlawful Occupation of Land Act).

In March this year, officials issued “compliance notices” warning that the occupiers were contravening the City’s street bylaws by erecting structures.

During the Covid-19 lockdown, officials tried to relocate them to its Strandfontein shelter for the homeless, but they resisted.

At the time, the Legal Resources Centre wrote to the City on their behalf, and residents believed they had secured an undertaking that no one would be forced to move.

But in May, while there was still a moratorium on evictions under Covid-19 regulations, members of the City’s Displaced People Unit arrived early one morning, waking the occupiers. They were told they were in contravention of the bylaws and that they would be fined or have to appear in court.

The community then obtained an interim court interdict, stopping their eviction and harassment.

The matter came before acting Judge Hockey to determine if the interdict should be made final.

He said that while there was a dispute of fact over what actually occurred on that day in May, it was common cause that generic “one size fits all” notices had been issued. These notices did not contain the exact nature of the alleged contraventions.

Judge Hockey said it was clear the community should have been deemed “occupiers” and deserving of protection under the PIE Act which dictated that a high court process had to be followed to evict them. The “street bylaws” excluded informal settlements, he said.

“The City can’t evict them without resorting to this (PIE) procedure. Instead, it has attempted to devise an alternative way, through the provisions of the street bylaws, to ensure their removal.”

“The intention of the City is exposed in the plan to return there the following day, to clean up the site of those residents who vacated, or assist those who wished to vacate.”

“The City is using the bylaws as a quick fix to persistently harass the residents so that they will eventually succumb to pressure and vacate the settlement.”

“And it did so without any offer of alternative accommodation in this regard, and while evictions were stayed under Alert level 4,” the judge said.

Responding to the court victory, the Singabalapha group said in a press release on Wednesday that they had “stood strong” despite the government’s refusal to provide them with basic services such as water, electricity, and ablution facilities.

“Against it all, we stayed out here on the pavement: young and old, women and children, sick and unemployed.”

“Acting Judge Hockey agreed with our version of events, singling out Richard Bosman from the City for giving ‘credence to the argument that the whole purpose of the operation was to harass the residents to an extent that they would move on their own accord’.”

Their attorney, Lucien Lewin, said, “ Hopefully, the City will reconsider the manner in which it deals with persons living in informal settlements, and refrain from the kind of ‘constructive eviction’ which they have attempted to perpetrate against the residents of Singabalapha.”

Next:  The “Angels” who open their homes to children in need

Previous:  Call for transparency in appointment of new Lottery boss