Residents spend the night on the street in Observatory

Backyarders and shack-dwellers who occupied Arcadia Place in Observatory were evicted on Wednesday evening.

The building, left vacant for renovations by the Cape Peninsula Organisation for the Aged (CPOA), has been occupied by township residents for several weeks. 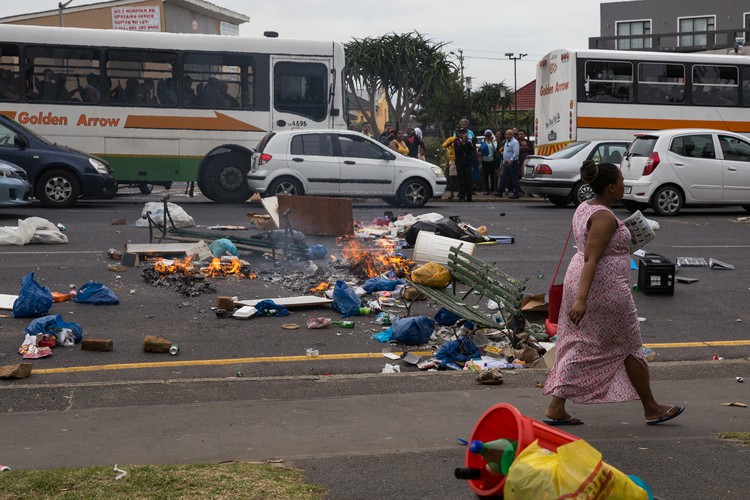 Occupiers blocked the street with rubbish after private security guards entered the building to evict them.

Armed Vetus Schola private security guards entered the building, asking residents to take their things and leave. As soon the guards entered, some residents made their way to the Main Road and burnt trash, blocking traffic. About ten minutes later, law enforcement officers cleared the streets and security guards barred the front entrance gate with locks and chains, leaving only the side entrance open. 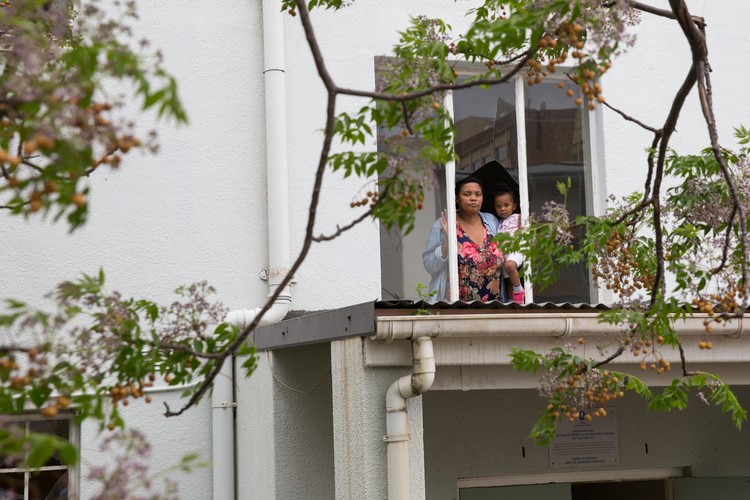 A woman with a baby watches from one of the upper floors of Arcadia Place as occupiers removed their belongings.

Some residents packed up their belongings and carried them out to the side exit while others moved their things to the front gate. Workers wearing hard hats and reflective vests carried out the belongings of other occupiers. Furniture including mattresses and chairs lined the side street outside. 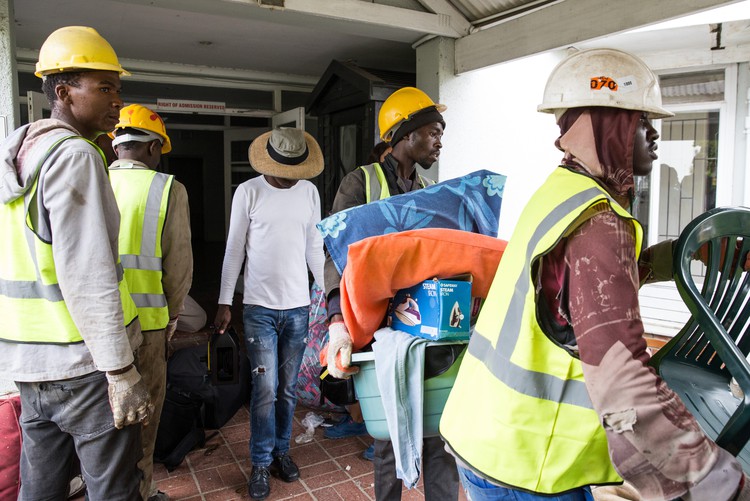 According to the occupiers, over 200 people had moved in to the building. They said that the building had been vacant for a couple of months. The three-storey building is set to be torn down and turned into an upgraded welfare retirement home.

At the front entrance, about 30 residents gathered with their belongings asking repeatedly for the front gate to be opened so that they could leave. The private security staff denied their request. During this time word spread that an interdict against the eviction was being processed. Residents then sang struggle songs and decided to hold their ground. “The land is ours. We are not going anywhere,” said one of the residents. People were being moved “in the name of development,” he said. 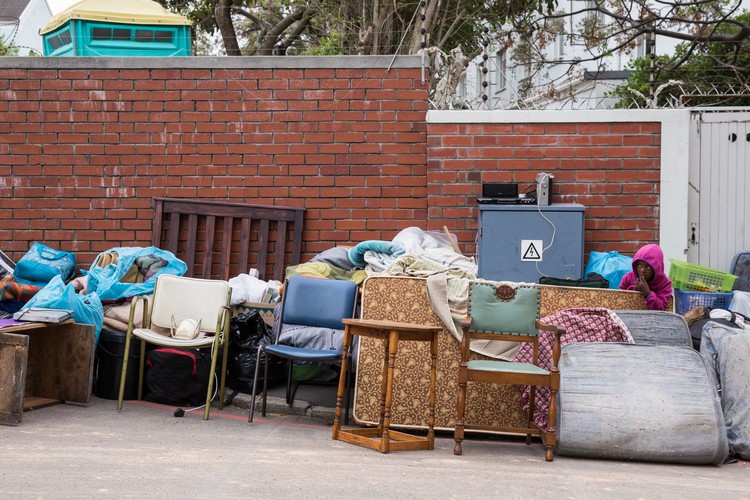 Furniture of occupiers has been strewn along the side street.

“We don’t have anywhere to go anyway. We are staying here,” said resident Bambini Bandla. He said his previous shack in Barcelona informal settlement had been demolished and he and others had seen the vacant Arcadia property and decided to occupy it. “Where are we supposed to go?” he asked. If evicted, Bandla said, he would sleep on the street. 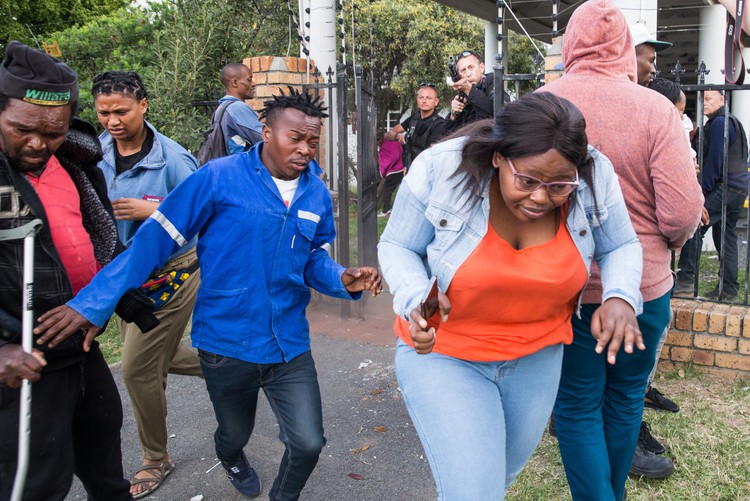 A private security guard fired his weapon into the air after occupiers tried to get inside the building through the front gate.

Hours passed and residents returning to the occupied building were now stuck outside. Security guards told residents inside that the gate would be opened and that they should leave. The chains were then removed and the gate opened. Immediately residents outside tried to force their way in. A loud “bang” went off and private security guards opened fire. It is unclear what type of ammunition was used. But the residents inside didn’t leave, and instead, sat down.

As the sun sank, the crowd locked outside started to grow. At around 8pm, about 60 people were gathered at the front entrance. With the weather cooling down, some were covering themselves with blankets while others huddled on mattresses beneath duvets on the lawn outside, waiting for their lawyer and occupation leaders to return with information on the interdict. The eviction was at a standstill. Both law enforcement and SAPS were on the scene but no action was being taken. 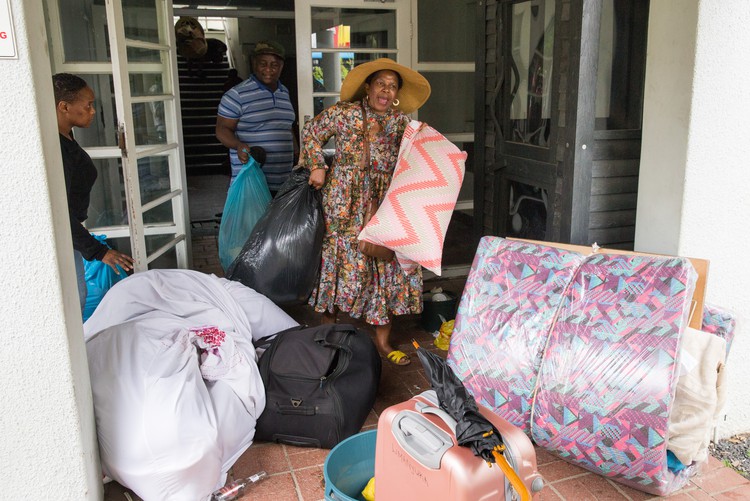 Occupiers carry out their belongings.

The lawyer and leaders arrived to cheers from the crowd outside. Residents started singing, whistling and dancing.

They were under the impression that while the urgent interdict was being processed, the eviction would no longer proceed. The lawyer explained that this was not the case. He suggested the occupiers leave peacefully and sleep outside until the eviction court proceedings continued on Thursday morning. The residents agreed. “We have to move out, but we are not going anywhere. We are going to sleep here,” said resident Yolanda Mjuza Poqo.

The remaining residents within the gates started carrying out their belongings. A line of mattresses was laid outside as residents prepared to spend a cold night outside the once again vacant building. 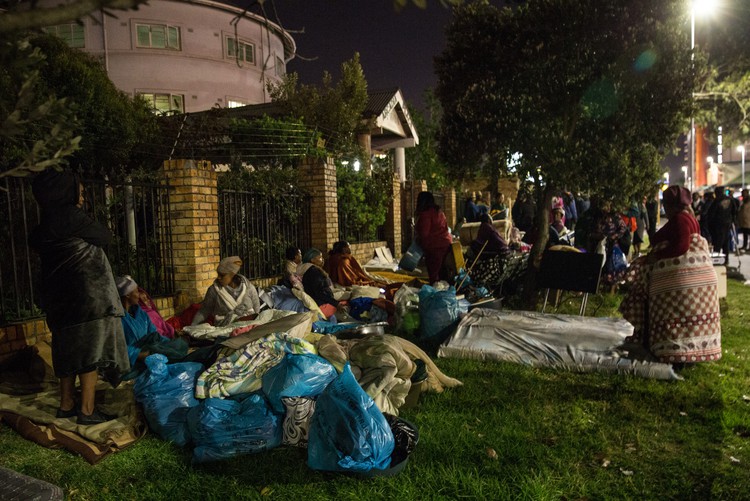 Occupiers gather on the lawn where they will spend the night after being evicted.

Next:  Threat of drought looms over Queenstown