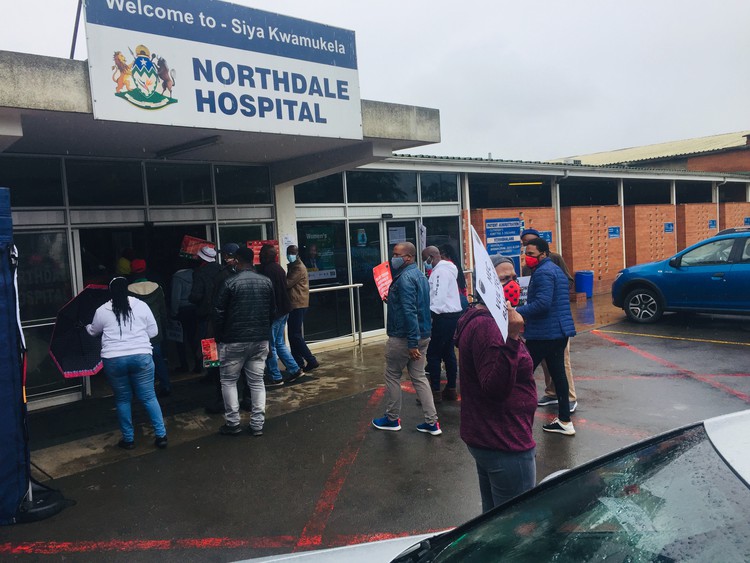 Eight shop stewards at Northdale Hospital in Pietermaritzburg have been suspended. This follows the protest last week by National, Education and Health Allied Workers Union (NEHAWU) members who vandalised offices and forcefully removed hospital CEO, Edward Manyokole, from the building.

Workers expressed their dissatisfaction with Manyokole’s management of the hospital as well as with the hospital’s Human Resources (HR) Manager Sifiso Cele. The group spray painted some walls in the facility before forcing Manyokole to leave his office.

On Tuesday, NEHAWU Regional secretary Mazwi Ngubane was arrested for public violence charges but was released soon after.

Ngubane said the union was unhappy with the department’s decision to suspend the workers. He claimed that the suspended workers were not part of those who removed Manyokole. “Those members were not even present on the day of the incident. It had been a long time since the workers and the community at large complained about the incidents of negligence at that hospital. It is clear that the message is falling on deaf ears of the management of Northdale,” said Ngubane.

A worker, who asked to remain anonymous, said that the suspension of the workers did not deter them in their fight for better working conditions. “It has become normal for the department to take major steps when workers are fighting for their rights. Workers are not happy in many of the hospitals in this province. Once they speak out or take action, they are threatened. Their threats are not scaring us anymore,” said the worker.

Health MEC Nomagugu Simelane Zulu said that the workers who participated in the removal of the CEO “will face the music”. Zulu said the department has been aware that some of the people who entered the building were not all employed by the department, however, they were able to identify employees through video footage.

“What has happened can’t be allowed. It is unacceptable to remove a manager in that manner. The service provider for the security company will also have to explain how that happened under their watch,” said Zulu.

“The department would like to allow internal processes to unfold unhindered in this matter. Therefore, the Department will not be commenting further,” said Maphisa.

Next:  Day Zero in “The Place of Water”