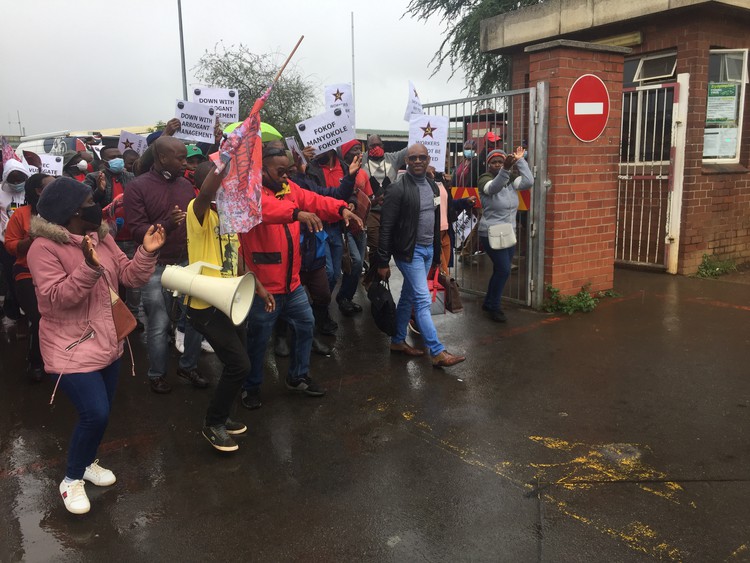 NEHAWU members escorted Edward Manyokole (wearing a black jacket and blue jeans) from Northdale Hospital in Pietermaritzburg on Tuesday. The group are unhappy with how the new CEO is running the facility. Photo: Nompendulo Ngubane

The protesters expressed their dissatisfaction with Manyokole’s management of the hospital as well as with the hospital’s Human Resources (HR) Manager Sifiso Cele.

The NEHAWU members entered the hospital’s gates holding placards. They went straight to Manyokole’s office, demanding that he leave immediately. A pot plant in the passage was used to break the glass door of his office. They went to Cele’s office and when the group discovered that Cele was not there, they spray painted “CEO must go” and “hamba inja” ( which means “the dog must leave”) on the walls.

The protesters then escorted Manyokole outside the gates, carrying his bags to his car.

Mazwi Ngubane, NEHAWU secretary in the Harry Gwala Region, said Makonyokole and Cele had ignored requests to meet with the union to discuss issues at Northdale.

Ngubane said conditions at the hospital “are worse than before” and staff were unhappy.

“Their lives are put at risk. We have an issue of Covid-19 dead bodies being kept in the hospital longer than they should be. The issue of Personal Protective Equipment (PPE) is also a problem. The department said it has run out of funds. It is surprising how the department has no budget while workers are at risk,” he said.

He said the workers were relying on PPE from a field hospital at the Royal Showgrounds which was constructed to assist with the influx of Covid-19 patients during the peak. The facility has since closed.

“We trusted the CEO to make a difference after the suspension of the former CEO. The employees were patient with him hoping he would change. He had shown arrogance. We want both of them out of this hospital. They must go,” said Ngubane.

An employee who asked not to be named said they have to buy their own PPE and sanitiser for work. “Fortunately we have a warehouse nearby where we buy our protective gear. It’s a mess. We work because there is nothing we can do.”

On his way out Manyokole told GroundUp that workers were accusing him of things that he is not aware of. “They say I’m arrogant. All they want to do is to dictate and I cannot allow that,” said Manyokole.

Head of the KwaZulu-Natal Department of Health, Dr Sandile Tshabalala, condemned the actions of protesters. “A high-level team of officials from head office has been deployed to investigate the incident,” said Tshabalala.