Illegal evictions of farm dwellers on the rise, says union 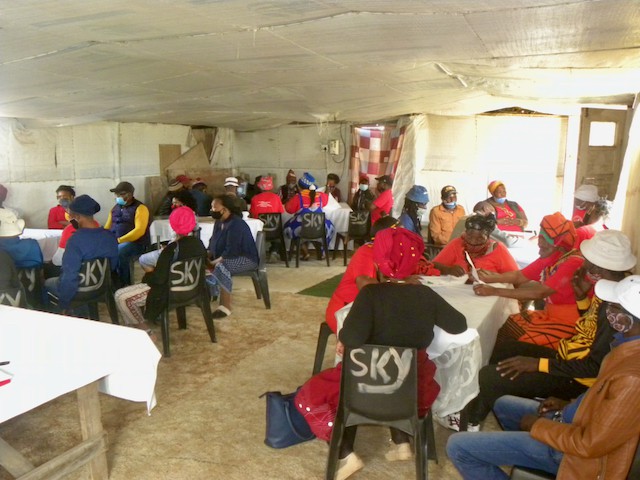 Eastern Cape farm workers gathered ahead of Human Rights Day in Paterson saying they have nothing to celebrate. Photo: Joseph Chirume.

About 50 farm workers and farm dwellers gathered on Saturday in Paterson in the Eastern Cape Sundays River Valley. They said they had nothing to celebrate on Human Rights Day.

The workers came from settlements around Addo, Kirkwood, Enon, Bersheba and Paterson.

A worker, who requested anonymity as he is being evicted from a farm where he has worked for 12 years, said, “Farmers do as they please. Farm workers are being evicted without following the proper channels and we have nowhere to report because we don’t have money to pay lawyers.”

Workers complained of overtime without payment, physical and verbal abuse, and foremen demanding sex. They said farmers should stop using underage children as labourers and that workers injured when on duty should be fairly compensated. A worker from Paterson said farmers using immigrants caused tensions within communities.

The meeting was organised by the Sundays River Valley Farm Workers Forum and the Makukhanye Rural Social Movement.

Mcedisi Maneli said he would think twice before he votes in the upcoming municipal elections. “I think this is high time we took our plight to the doorstep of the national Parliament … How can we keep voting when our rights are being trampled on a daily basis?”

Elsie Peta of Bersheba said, “We are prepared to march to Pretoria and present our grievances to the government.”

Thuse Manene, the meeting convener, told the workers, “Most of these evictions are illegal. I urge you not to take out your belongings. You make your case worse if you do so. The law says the farmer should get permission from the courts and that the affected worker should be notified of the process. The farmer should also provide alternative accommodation to a place where the evicted worker is moving to.”

National Union of Metal Workers of South Africa (NUMSA) regional education officer Joel Rasi also attended the meeting. He said, “We are seeing an increase in cases of illegal evictions and that of occupational health hazards … We have to mobilise and educate farm workers about their rights. They should come out in the open rather than suffering in silence. Farmers are also dividing their workers by preferring immigrant workers ahead of locals. To make it worse, the immigrants are overworked and underpaid.”

Rasi said, “We don’t want our people to fight the immigrants over jobs because foreign nationals are suffering after running away from their countries. We have to reach an amicable solution because they are our brothers and sisters and their struggle is also our struggle.”