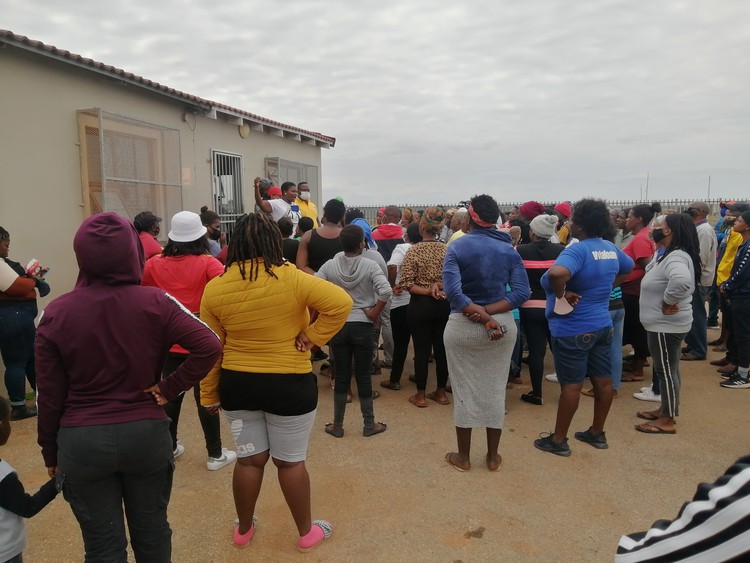 Dozens of people from several townships in Gqeberha protested outside their ward councillor’s office in Joe Slovo on Friday. They claim that he is neglecting his duties by failing to provide proper housing and electricity, among other issues. Photo: Mkhuseli Sizani

Residents from several townships in Gqeberha (Port Elizabeth) are accusing their ward councillor of neglecting his duties by failing to provide proper housing and electricity, among other issues.

About 150 people from informal settlements and RDP houses in Joe Slovo West, Nkandla, Marikana townships and Dubai, Winnie Mandela, Nyamazana and Masibulele protested at the offices of ward councillor Simphiwe Tyukana in Joe Slovo on Friday.

Most of the protesters are demanding that over 600 houses in Joe Slovo West, which they claim were poorly built by contractors, be fixed. The houses were built by the Eastern Cape Department of Human Settlements in 2013.

The group also demanded that they be allowed to elect their own steering committee to decide who is allocated jobs in the community.

Tyukana, however, believes that the protest was “politically motivated” and spurred on by the upcoming local government elections. “This has nothing to do with the service delivery. It’s just disgruntled individuals who have ambitions to become ward councillors and are using the community to drag my name in the mud. Some of their grievances have nothing to do with me,” he said.

But protesters say Tyukana has done very little to help the community.

Noluvuyo Ntwasa from Joe Slovo West said her RDP house began to crumble two years after she moved there in 2014. “The walls have huge cracks and the doors can fall anytime. The toilet was faulty and water is still leaking. My sister who is mentally ill has the same problems in her house. I have been reporting these problems to Tyukana’s office, but nothing was done,” she said.

Zukiswa Maguga, a community leader in Nkandla claimed that Tyukana only hired people who supported him for community projects. “Aluta Road, the main road in Nkandla, is badly damaged. Taxis drop us about 3km away. Our children miss school on rainy days because the place is muddy and full of water.”

Luthando Mvandaba, from Winnie Mandela informal settlement, said electricity problems had continued even after an eight-year-old boy was electrocuted by an izinyoka connection in September. Mvandaba said that the late former mayco member for electricity and energy, Mongameli Bobani, at the time promised formal electricity to shack dwellers but this had never been provided.

“Tyukana came the following day and said that in order for us to have electricity we should firstly allow the electrification of 500 temporary shelters for destitute and elderly from across the metro. But we stopped that project before it could even start,” he said.

Tyukana told GroundUp that the refurbishment of houses in Joe Slovo West was not currently on the City’s budget. “Only the 289 houses in Khayamnandi, Despatch have been approved for rectification by provincial Human Settlements.”

On the issue of Aluta Road in Nkandla, he said they were waiting for the outcome of a few tests in order to fix the road.

Tyukana acknowledged that residents of Winnie Mandela had been promised electricity but said there was no database on the area to identify the rightful owners of the serviced municipal sites. “This is because most of them were invaded. Now the invaders don’t want to follow proper municipal processes in order to get service delivery. They want to be recognised by force,” he said.

Tyukana also disputed claims that he has favoured certain people for job allocations in the community.

Next:  Spar workers strike over pay

Previous:  Farm workers say they have nothing to celebrate on Human Rights Day