Asylum seekers are desperate for government to start serving them again 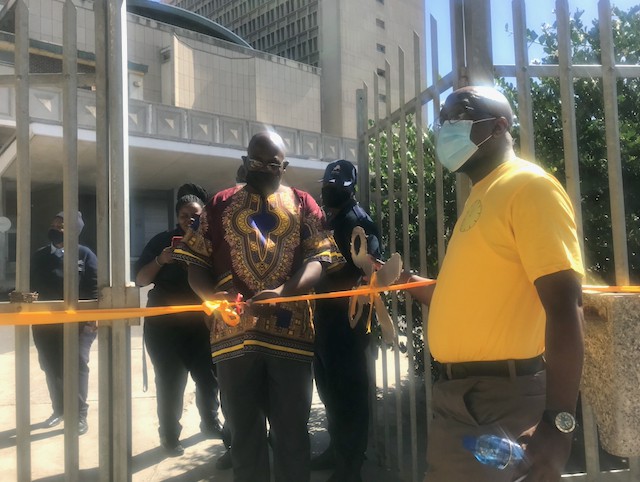 Hupenyu Mukusha of the Refugee Pastoral Care project of the Archdiocese Durban played the role of Minister of Home Affairs in a mock ceremony. He gave a speech and cut the ribbon to mark the official opening and resumption of services to asylum seekers and refugees. Photo: Tariro Washinyira

On Friday about 30 people from various refugee and civil society organisations hosted a mock celebration of service resumption outside the Cape Town Refugee Reception Office (CTRRO).

They want the Minister of Home Affairs Aaron Motsoaledi to fast track the resumption of services for all refugees and asylum seekers.

The organisations are concerned that Home Affairs has not communicated its plans for reopening the office, nor how it intends to extend the validity of permits, nor how refugees are to deal with the barriers created by having permits with expired dates (even though valid).

In a statement, the organisations said: “On 27 March 2020 the (CTRRO) was temporarily closed in response to the Covid-19 national lockdown. Home Affairs has since given refugees and asylum seekers blanket extensions on their temporary asylum seeker permits and refugees status permits. These extensions are effective until 31 March 2021.

“These blanket extensions of people’s permits have resulted in people being unable to access banking, education, health care services renew, lease agreements, losing jobs and has put new arrivals at risk of deportation and detention [because their permits do not actually reflect that they have been extended].”

The colourful “celebration” was marked by music, yellow regalia, balloons and posters that read: “Now children can go to school without being questioned”; “Now I can draw money from my bank account”.

Hupenyu Mukusha of Archdiocese of Durban Refugee Pastoral Care played the role of Minister of Home Affairs. He gave a speech and cut the ribbon to mark the official opening and resumption of services to asylum seekers and refugees.

In his speech he said: “Let me start by apologising for the delay in resuming services … We are fully aware of the trauma the delay has caused. It is quite regrettable that there was little we could do due to the Covid-19 regulations. However, the good news is that we have decided to resume our services at our offices across the country.”

The audience cheered, jumped, danced and chanted slogans in return.

“We are a constitutional and democratic country that has respect for human rights. We have an obligation to protect asylum seekers and refugees emanating from international treaties and conventions which we signed. We are fully committed to ensure that all renewals are done expeditiously and new applicants processed with no delay.”

Mukusha told GroundUp that the Minister needs to act. “He has the mandate, he is capable of changing things and he should. Home Affairs needs to upgrade its system and ensure asylum seekers who are not documented, who have genuine claims, have access to Home Affairs offices where their claim can be adjudicated.”

Next:  Farm workers say they have nothing to celebrate on Human Rights Day