Numerous groups marched to Parliament or picketed outside the gates on Wednesday, ahead of the budget speech by Minister of Finance Tito Mboweni.

Hundreds of protesters under the banner of Cry of the Xcluded marched to Parliament as well as the civic centre demanding that government deal with the crisis of unemployment.

Titled #WorkForUs, a number of of organisations and unions including the South African Federation of Trade Unions (SAFTU), Association of Mineworkers and Construction Union (AMCU), the Assembly of the Unemployed (AoU), South African Municipal Workers Union (SAMWU) and the #Unemployed Graduates participated.

“Our economy lies in natural resources,” said Wandile Msweli of the Unemployed Graduates from Durban. He said government needs to teach young people how to work and use the land.

Wearing his black graduation gown, Msweli has a degree in accounting, but has been unemployed for almost five years. He lives with his parents and said that not having a job affects his “dignity”.

Some of the banners carried by marchers read: “Where are the jobs you promised”, “Retrench bosses, not workers” and “We demand permanent jobs”.

A number of memos were handed to officials, first at the civic centre and then at Parliament.

At the civic centre a memo handed over by SAMWU to a City official called for workers to be insourced and for dismissed “shop stewards and members be reinstated”.

At Parliament, demands by the campaign included that 18 to 59-year-olds without a stable income receive a basic income grant and that the unemployed people receive a grant of R12,500 per month. 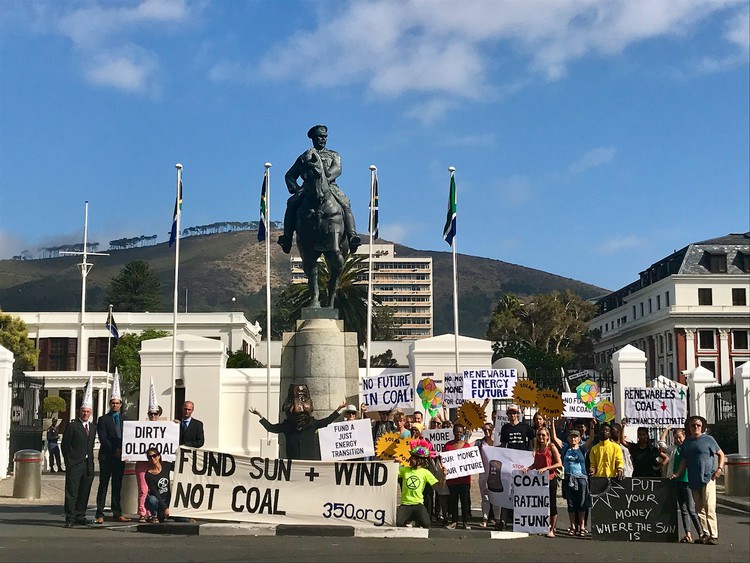 About 30 activists picketed outside Parliament calling on Mboweni to stop government investment in fossil fuels and to rather finance a transition to renewable energy.

The protest was organised by 350 Africa, supported by Project 90 by 2030, Extinction Rebellion Cape Town, and Tearfund. One poster read: “Put your money where the sun is.”

In a media statement 350 Africa said: “Mboweni has a leading role to play in tackling the climate crisis in South Africa by steering public finance institutions, specifically the Development Bank of Southern Africa (DBSA) and the Industrial Development Corporation (IDC) to put in place policies that exclude funding of fossil fuels and instead finance a just transition to renewable energy.”

Glen Tyler-Davies, one of the organisers, said: “Climate change is having a huge, negative impact in South Africa. We have seen floods in areas such as KwaZulu-Natal, droughts and food insecurity becoming more frequent. If we want to avoid similar problems and preserve people’s lives, particularly the vulnerable people in society, we should take action. We want to make sure if we are spending money in South Africa we are spending it on renewable energy.”

Gabriel Klaasen, a young activist from Gatesville, said, “We have the biggest opportunity to use renewable energy like solar … We should be moving away from using fossil fuels and invest in renewable energy so that we can make the world sustainable for the future generation.” 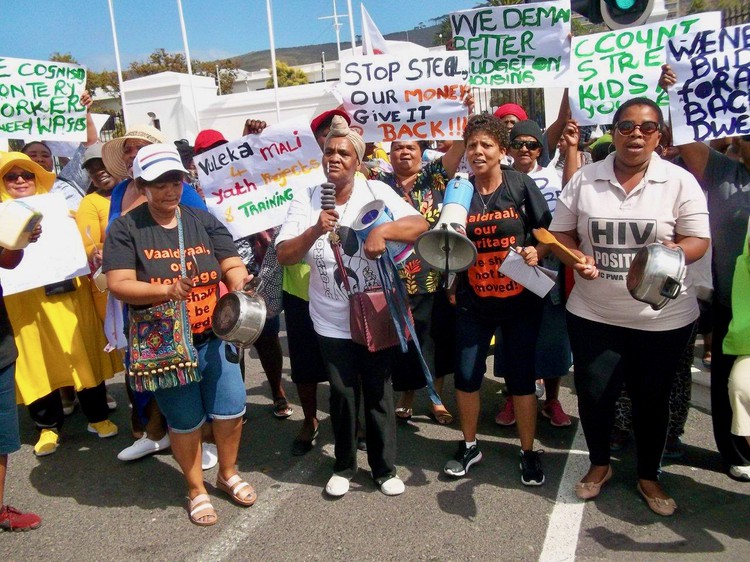 Women’s groups protest near Parliament ahead of the budget speech. Photo: Vincent Lali

“More Money for SASSA” and “We need budget for all backyarders” were among the posters held up by a contingent of women protesters. Women’s circles from 10 communities, People’s Health Movement, Budget Coalition and a large number of other civil society organisations participated in the demonstration.

Vainola Makan, co-founder of Sisterhood Movement, said she was protesting against “a male-centered budget that excludes women in the way it’s divided”. The budget doesn’t adequately deal with all the needs of women, she said. “The budget deals only with only one aspect, which is gender-based violence. We are saying housing, safety, environment, water and land are all women’s issues.”

“We are the majority, so we don’t want to get just one small slice of the budget cake,” she said.

Wendy Pekeur, spokesperson for Ubuntu Rural Women and Youth Movement, said: “We hear that VAT will increase, which means women will struggle to survive and will have to tighten their belts.”

“We want the minister to set aside more money to help women do subsistence farming and make land available for them.”

She and other protesters wanted to hear how the R1.6 billion President Cyril Ramaphosa had committed to fighting gender-based violence would be spent.

Soraya Salie, founder of Bontheuwel Walking Ladies, said she wanted the minister to put money aside to improve health services at township clinics. “We want the minister to increase social grants so that women can buy toiletries and still have money to sustain their families,” she said.

Joyce Malebu, provincial co-ordinator of Right to Know, said: “The ministers must stop increasing salaries of other ministers by large amounts and increase grants by a lousy ten rand. We want a R200 grant increase.”

Simo Sithandathu, provincial manager of the Treatment Action Campaign, said the organisation joined the demonstration to support Healer, which is calling for the regulation of the food industry and which wants government to increase tax on sugary foods.

Sithandathu called for the minister to set aside money to fill vacant posts of nurses and doctors. “The vacancies for nurses and doctors are frozen because there is no money to employ them, which makes me wonder how we can expect the government to implement NHI.”

Next:  Women make a living picking through scrap metal