2020 in pictures: a year of living dangerously

Covid-19, evictions, fires and an elephant: GroundUp’s photos of the year 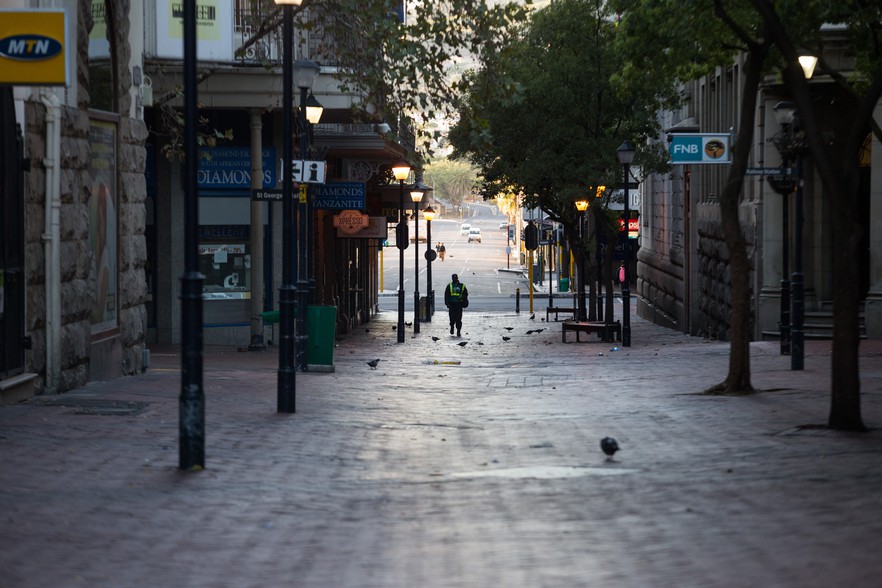 The streets of Cape Town were almost deserted during the Covid-19 level 5 lockdown. Photo: Ashraf Hendricks

After what can be described as a “long year,” the end of 2020 has given us much to reflect on. Covid-19 and the subsequent lockdown brought the country to a standstill. Hundreds of refugees were removed from the Central Methodist Church in Cape Town after occupying it for months, and new land occupations across the country were met with stern responses from the authorities. But there was also hope. The lockdown brought to light the role of civil society feeding those in need, and out in the Klein Karoo, a small town tried to heal the divisions of apartheid with giant puppets.

Here is a small selection of pictures from GroundUp staff and freelancers during 2020. 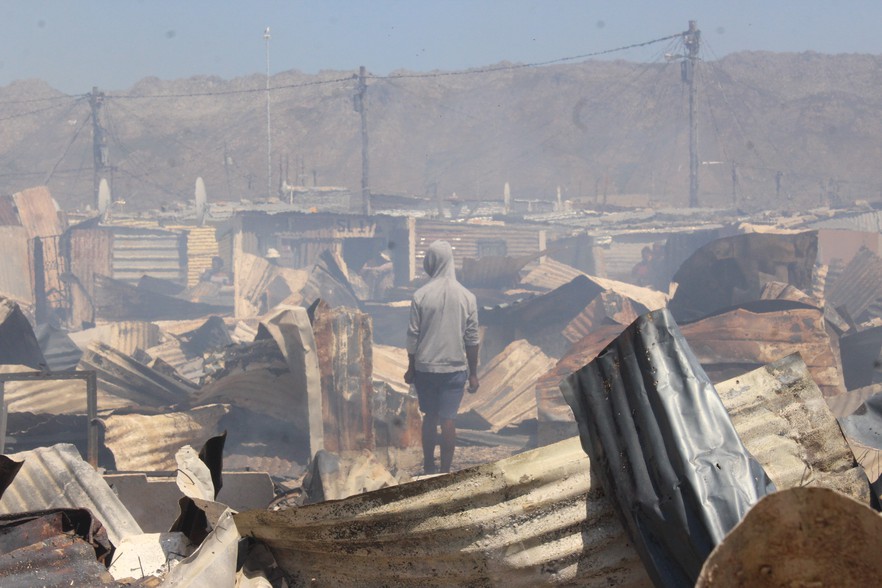 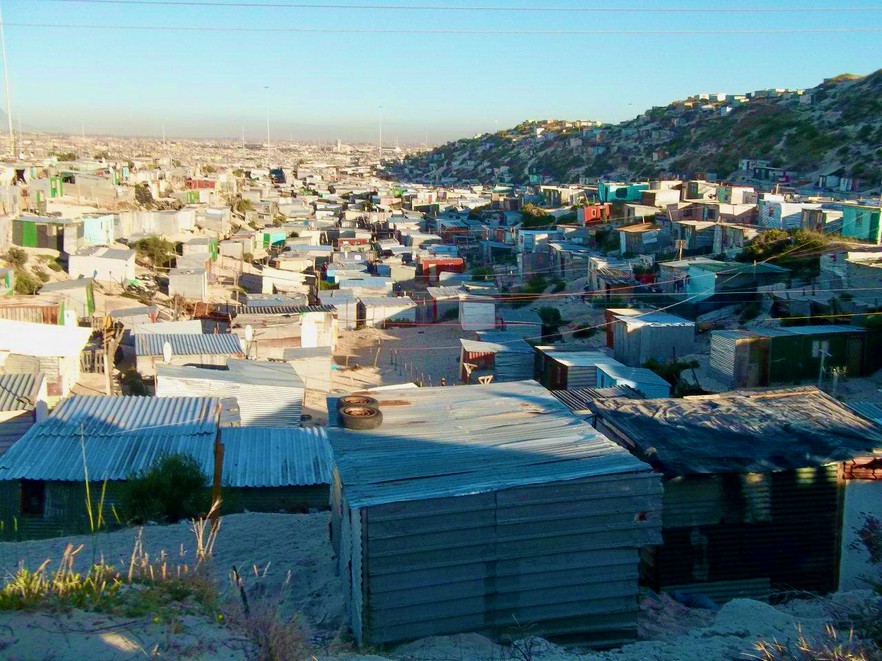 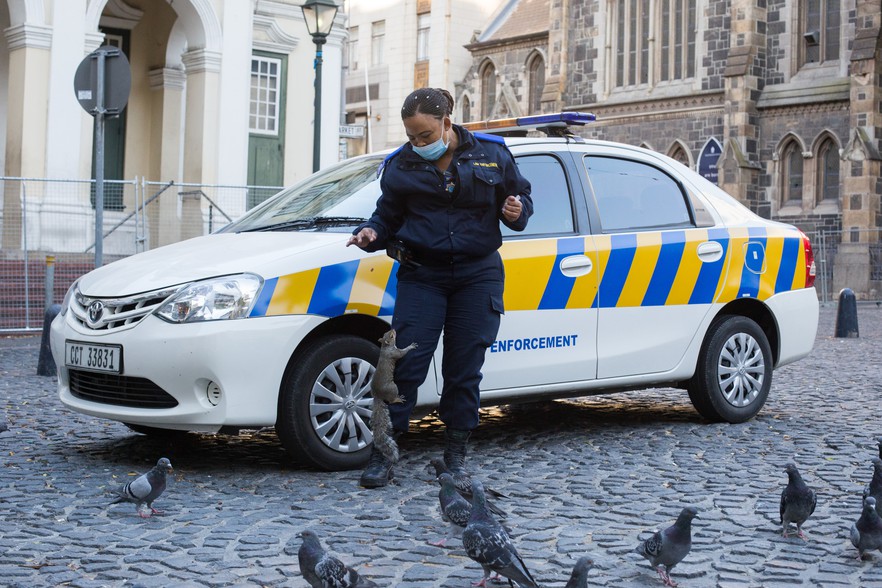 27 March 2020 - A law enforcement officer stationed at Greenmarket Square was befriended by a squirrel. During day 1 of the three-week ‘level 5’ hard lockdown, soldiers patrolled the streets as only essential workers were allowed to work and stores had limited opening hours. Photo: Ashraf Hendricks 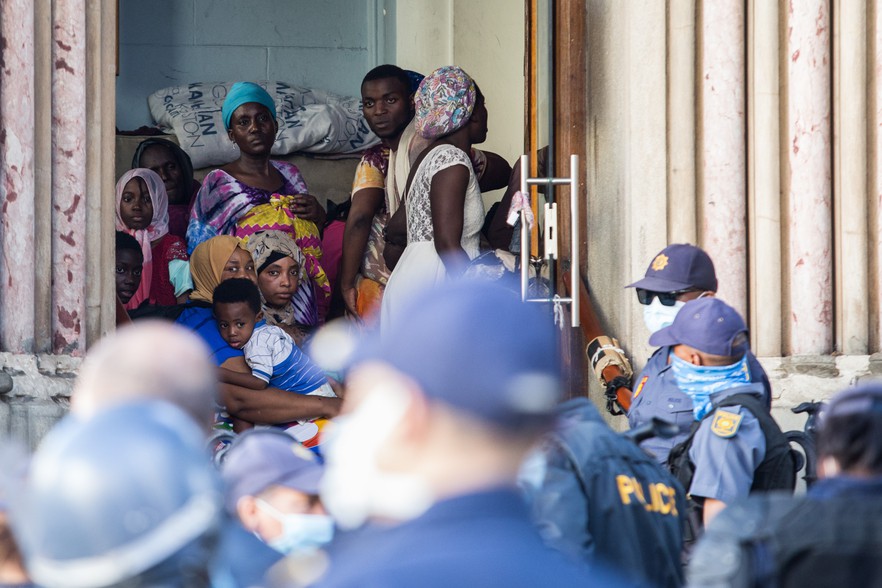 2 April 2020 - After a five-month occupation, hundreds of refugees were removed from a church to Paint City in Bellville. Photo: Ashraf Hendricks 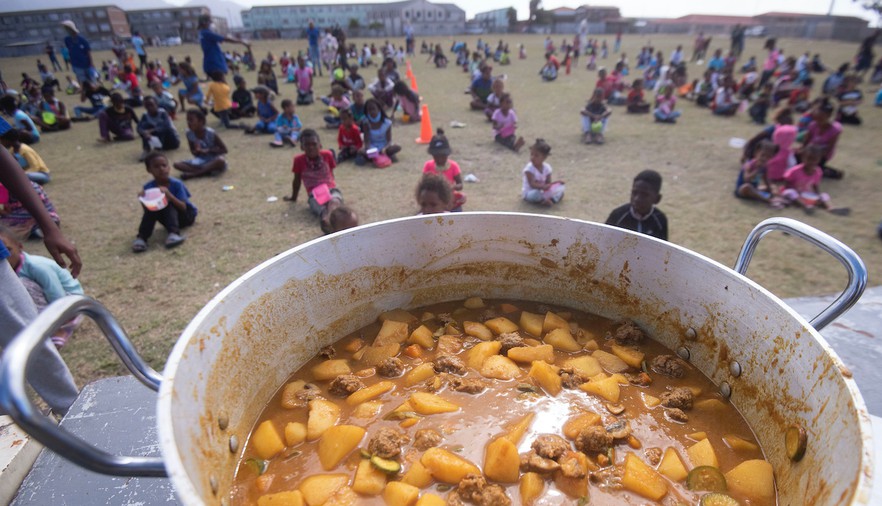 17 April 2020 - Children sat waiting to be fed on what is known as “the battlefield”, where rival gangs often clash in Lavender Hill on the Cape Flats. During lockdown, civil society networks fed over 1,000 children daily in Lavender Hill and surrounding areas. Photo: Brenton Geach (exclusive license - request permission to use from the photographer) 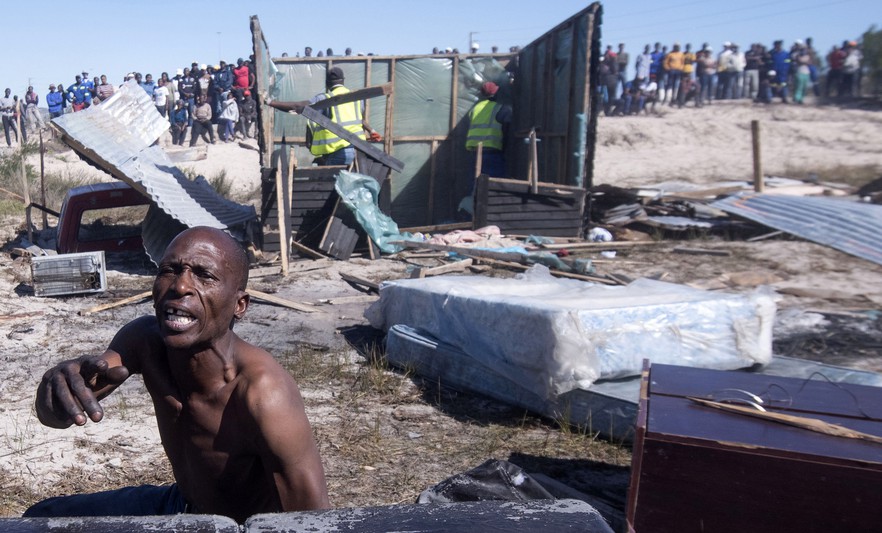 22 April 2020 - Alex Midikana watched among his belongings as shacks around him were removed near Empolweni in Khayelitsha. When Law Enforcement arrived, Midikana’s home was spared, but it was removed the following day. Photo: Brenton Geach (exclusive license - request permission to use from the photographer) 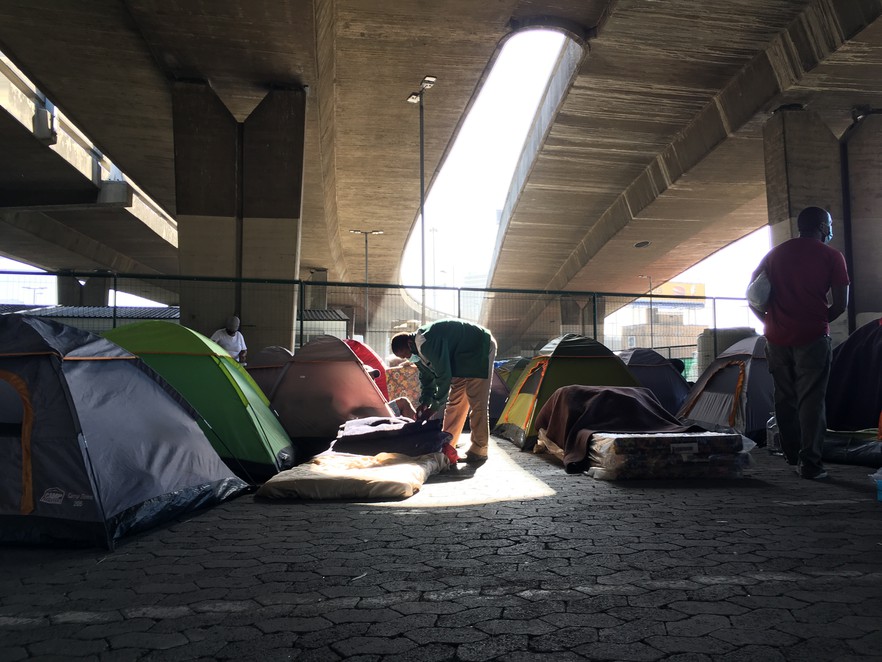 25 May 2020 - After the controversial homeless site in Strandfontein was closed, about 180 people were moved to an unserviced site under a highway overpass at Culemborg in central Cape Town. Photo: James Stent 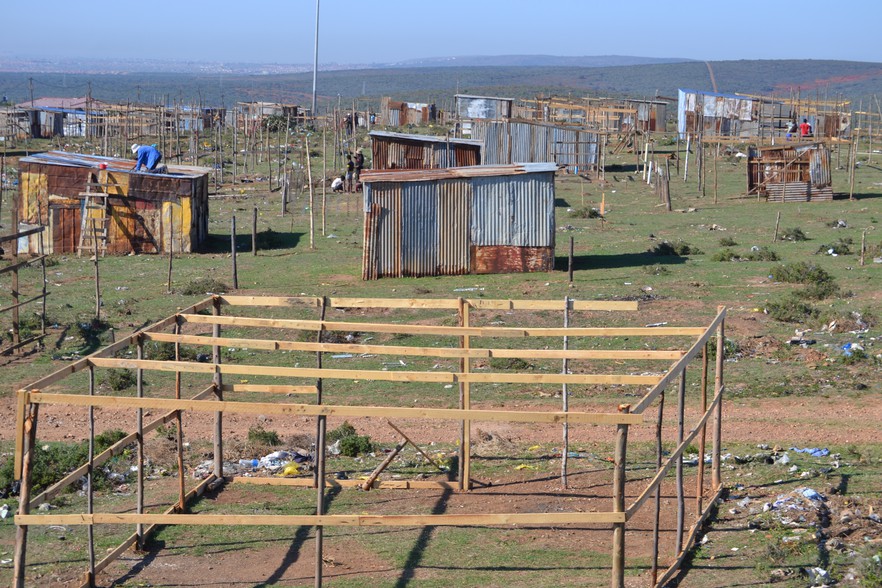 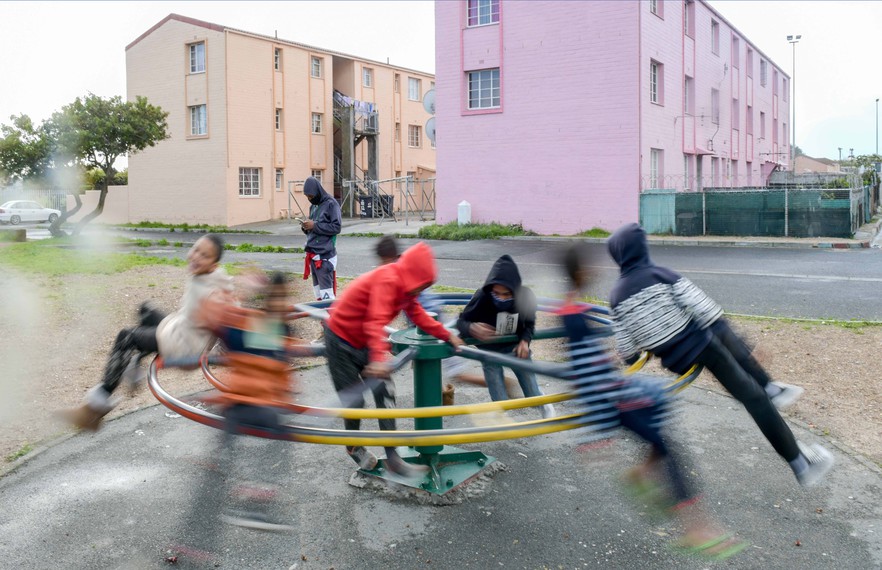 From 30 June, Photographer Jeffrey Abrahams shared a daily picture of life under lockdown in Cape Town. In the picture above, children play on a swing in Lotus River. The full series can be seen here. Photo: Jeffrey Abrahams (exclusive license - request permission to use from the photographer) 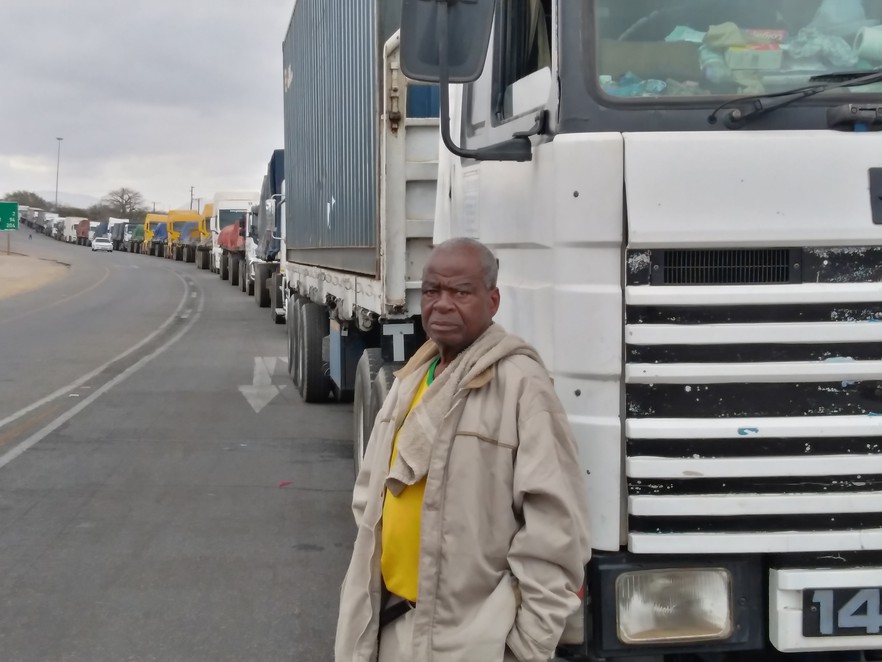 29 July 2020 - A 15km queue at the Zimbabwe border meant truck drivers had to wait for days to cross. Photo: Bernard Chiguvare 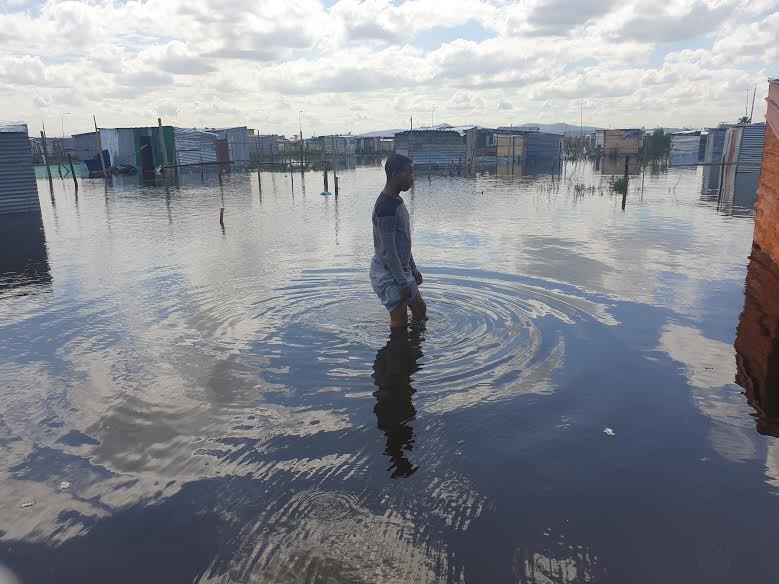 16 September 2020 - Thulani Mananga walked through dirty water in the flooded settlement in the eThembeni informal settlement in Khayelitsha. After a sewer pipe burst, residents said they were living in “liquid shit”. Photo: Mary-Anne Gontsana 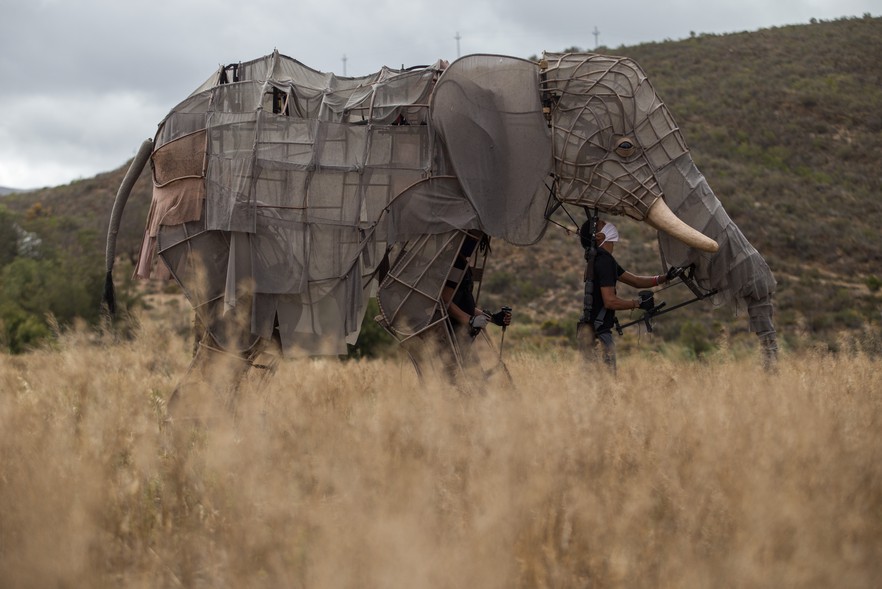 15 December 2020 - In the Klein Karoo, “Reboot Eden” celebrated ten years of puppetry in Barrydale where the annual puppet parade brings together the two sides of the town divided by apartheid. This year, because of Covid-19, puppeteers moved their work to the screen. Photo: Ashraf Hendricks

© 2020 GroundUp and various photographers. Some of the photos in this collection are available under Creative Commons license. Other are under exclusive license and clearly marked as such.