A SAPS-led operation has ended the occupation by refugees of the Central Methodist Church on Greenmarket Square.

A large contingent of police officers broke down both entrances to the Central Methodist Church on Thursday afternoon, before entering the church as a group. The police appeared to meet very little resistance from the refugees inside the church, and within minutes, they were being taken out of the church and shepherded into waiting Golden Arrow buses.

The refugees have been taken to the “Paint City” location in Bellville, a City-owned property previously identified by Mayor Dan Plato as a site for providing shelter to the City’s homeless population. The National Department of Public Works has set up large marquee tents, and will be administering food and sanitation to the former occupants of the Central Methodist Church.

SAPS formed a tight scrum around those leaving, with officers using riot shields to direct the flow of people towards the waiting buses. Police were also seen helping the refugees carry their bags and possessions out of the church. At least fifteen buses were on standby, and by the time GroundUp left the church at 6pm, eight buses with 40 to 50 people each had left, and the church had not yet emptied.

City estimates had placed the group’s number at 300 people, while Aline Bukuru, wife of JP Balous (a leader of a faction of the refugees), and spokesperson of the group in the church since his arrest, claimed that there were over 900 people living in the church. An official headcount has not been released, but the City’s count appeared short to observers. 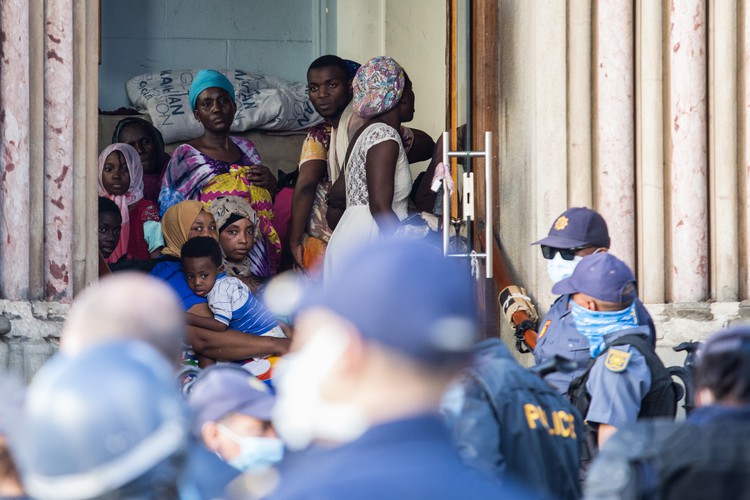 One bystander standing among the crowd of journalists identified himself as a Burundian refugee, and approached GroundUp to ask if it was true that the group inside the church was to be taken to the USA or Canada. He had been called earlier in the day by someone in the occupation who had told him to come to the church if he wanted to join them. We quickly established that there was definitely no truth to this rumour.

Earlier, the City had pulled out of participating in the operation; a few law enforcement officers were seen observing from a distance, as were officials from the Western Cape Department of Social Development. The operation, which an observer quipped was “more evacuation than eviction”, was carried out in terms of National Disaster regulations as an urgent intervention to protect the health of the refugees living inside the church, particularly from Covid-19.

The operation appeared to be tightly coordinated. At noon, Greenmarket Square was near-abandoned. By 1pm police vans had begun to assemble. Four fire trucks and emergency medical teams were on standby; their presence a reflection of the fearful rumours that the group inside the church might have prepared firebombs.

Soon after, Bukuru held court to a crowd of 20 journalists outside the church, and declared that the group would not be moved today.

But at 2:45pm, SAPS made their move and took control of the church. Rumours of violent resistance to SAPS were proven to be bluster. 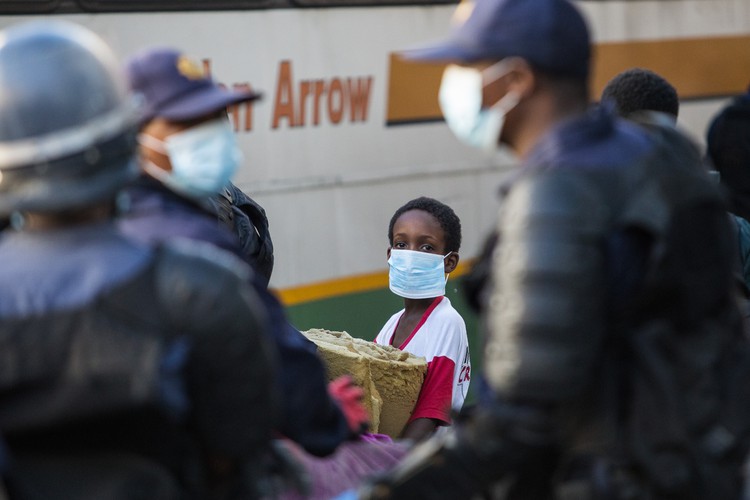 A child waits in line with some of his belongings before boarding a bus. Photo: Ashraf Hendricks

The group have been living at the church since 31 October, when they were forcibly evicted from their sit-in protest against xenophobic violence which they had held outside the UNHCR’s Cape Town offices on St George’s Mall. The botched operation, led by the City’s Law Enforcement unit, caused the protesting group to seek shelter at the church on Greenmarket Square.

Public opinion towards the protesting group slowly soured, as they refused to negotiate their impossible demands for group relocation, attacked a delegation of church leaders including Archbishop Thabo Makgoba and SA Human Rights Commissioner Chris Nissen, and refused to leave the church, despite constant pleas from its reverend, Alan Storey.

The group split in December between those that remained inside the church and those living outside it on Greenmarket Square. An operation on 1 March, following a court order, moved the outside group from their encampment to District 6. Subsequently a group settled outside the Caledon Square Police Station in the city centre. They are still there, but officers at the scene on Thursday told GroundUp that this group would be moved on Friday morning, 3 April. 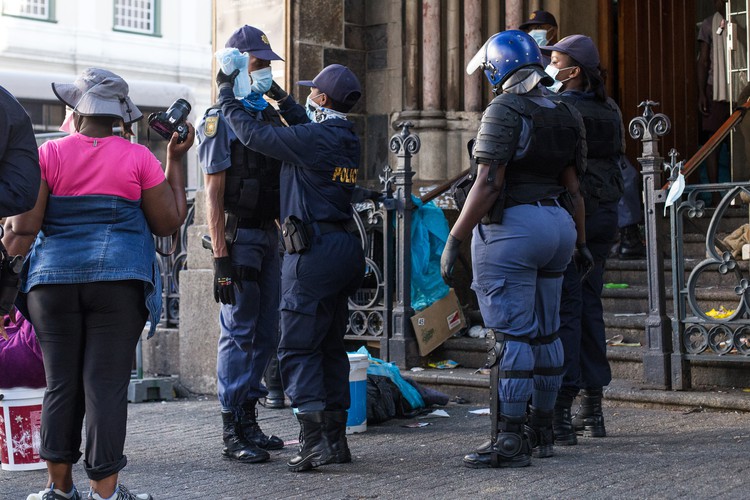