After the storm: protesting refugees settle in to marquee life

No city, province, or national officials at site

The refugees who occupied the Central Methodist Mission church in Cape Town have begun to settle in at their new home at Paint City in Bellville. On Friday 500 people, according to SAPS, were removed from the church, after five months of occupation and protest.

The national Department of Public Works has erected a 48-metre-long, 12-metre-wide marquee on the City-owned land. Paint City sits between industrial warehouses and the Bellville taxi rank. The tent has one partition, separating the sleeping quarters for men from women and children. The site is about a hectare, ringed by a two-and-a-half meter high steel fence. The children in the group, now with room to move, were enjoying impromptu foot races.

Sandra Bahibitugu, originally from Burundi, is acting as the media liaison for the group. She said that when they arrived on Thursday the only direction they were given was for women to settle on one side of the tent, and men to settle on the other. The refugees slept on the mattresses and blankets that they had brought with them.

The infrastructure at the Paint City site is sparse. There are two taps and five portable toilets. There appeared to be one plug point. Ten private security guards from Imvula Security were present. A City Law Enforcement Officer arrived at the site to take photos for “risk assessment” purposes. There were no other government officials present, and no indication that there was a government official in charge. 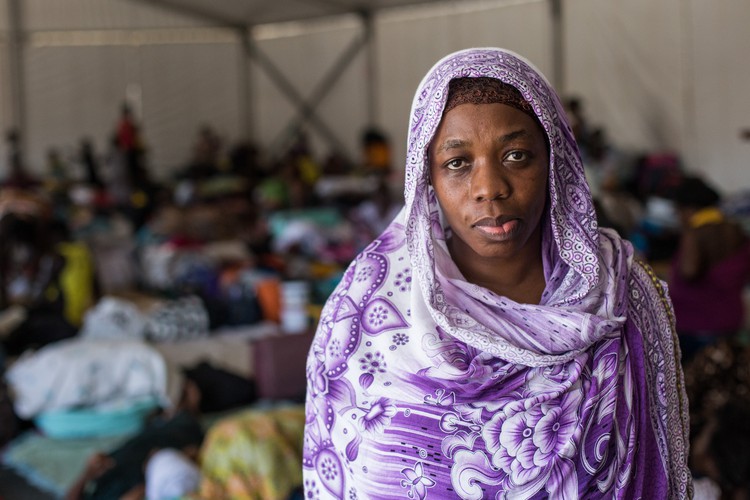 Sandra Bahibitugu is the spokesperson for the group.

According the Bahibitugu, SAPS had sprayed all the refugees with disinfectant as they entered the buses, and gave them masks and gloves. The group had not been briefed about social distancing, either in person or through information materials like posters or pamphlets. People were grouped closely, most in the sparse shade of the trees on the site’s border.

Bahibitugu had been given no person in government to contact in case of an emergency. She said that an immigration officer from the Department of Home Affairs had told her that officials from the immigration department would be visiting the site “in two days time” to begin document verification. Bahibitugu said that some members of this group have lost their documents, while the documents of others had expired. She said that there was some anxiety in the group about the situation.

Bahibitugu was grateful for the added space, compared to the church, but was concerned about the suitability of a tent with winter approaching. Friday was hot, and the tent was very muggy. But Bahibitugu said that Thursday night it was bitterly cold inside the tent. She also said that many in the group believed that the tent would not withstand winter rains.

The group of protesting refugees living outside Cape Town Central police station were still there on Friday morning, despite reports that they would be moved. GroundUp did not see enough space in the tents to accommodate that group. Bahibitugu did say that if the other group was to be brought to stay, there would not be friction, as they were “like brothers and sisters”.

Zara Nicholson of the Communications Directorate of the National Department of Public Works and Infrastructure (DPW) told GroundUp that DPW’s involvement in the site was complete, and that the Department of Home Affairs was the ministry that would be in charge of the site. DPW’s role was to identify the site, set up the marquee, and instal showers and toilets. Ten portable showers and ten portable toilets were installed at Paint City after GroundUp left the site on Friday.

We are still awaiting comment from the Department of Home Affairs and the City of Cape Town. 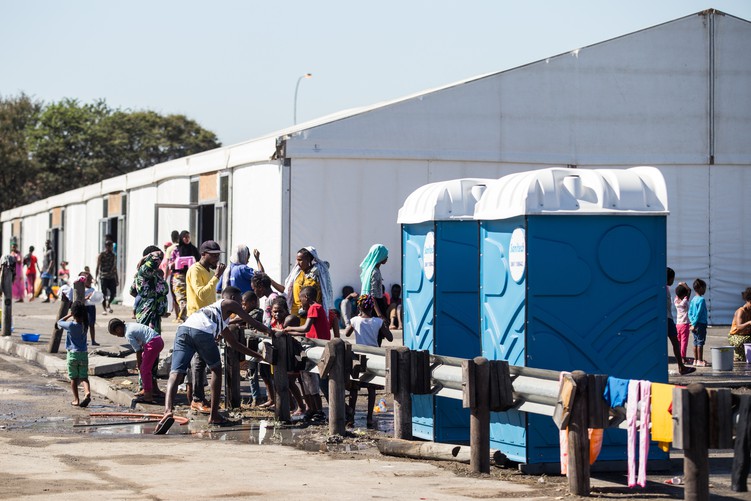 Children wash at the taps on the site.

Next:  Covid-19: New regulations clamp down on profiteering