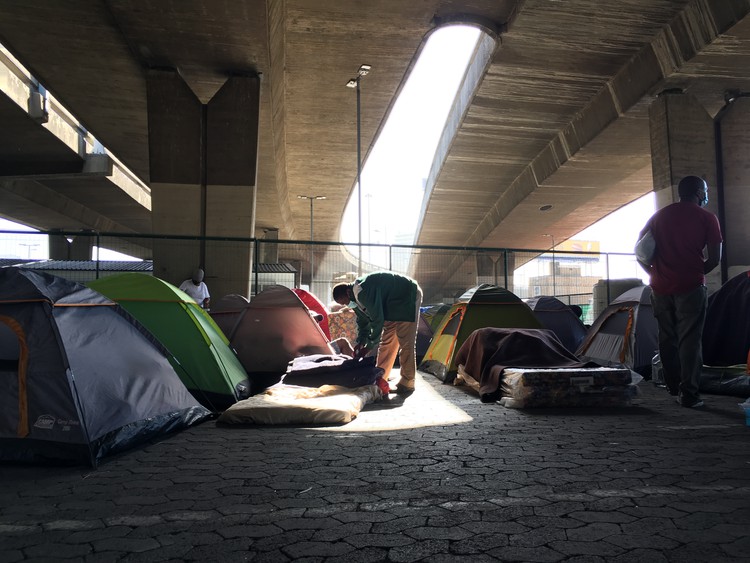 The last remaining occupants at the City of Cape Town’s temporary shelter site in Strandfontein for homeless people are now living under a bridge in the CBD. Photo: James Stent

A group of about 180 people, who were the last remaining occupants at the City of Cape Town’s temporary shelter site in Strandfontein for homeless people, have been moved to an unserviced site under a highway overpass at Culemborg in central Cape Town. A smaller group was taken to a serviced quarantine site in Melkbosstrand.

This follows a draft order issued by Judge Robert Henney in the Western Cape High Court on Thursday 21 May, which named 33 people and ordered the City to move them to a quarantine facility.

On Friday 22 May, GroundUp spoke to five people on Judge Henney’s quarantine list that were living at the unserviced site at Culemborg.

The closure of the site last Thursday was overshadowed by a dispute between the homeless people, the City and its lawyers last week. Part of the dispute was over some occupants who were in contact with a woman who tested positive for Covid-19 at the site.

GroundUp reported that a woman who had been living in the camp at Haven Tent 2 had tested positive for Covid-19. The woman had left the camp on Monday 11 May and was immediately taken for a privately-administered test. The City sent 12 elderly and infirm people for further tests, the results of which have not been revealed. Those living outside Culemborg have not been tested by state or private facilities.

Asked how someone contracted the virus in Haven Tent 2, Haven Night Shelter Welfare Organisation CEO Hassan Khan said, “We don’t know when, where or how the person was infected. Everyone at Strandfontein including staff were screened daily. Only people who screened as negative were allowed to leave. We know who came into the Haven shelters and they are included in the ongoing screening of clients, staff and volunteers in Haven shelters. We use infrared thermometers and look for signs of coughing, sneezing etc.”

In a statement on Friday, Councillor Zahid Badroodien, Mayco Member for Community Services and Health said that the City “objects to all allegations that it has dumped the homeless under a bridge in the CBD.”

“The remaining homeless refused to be taken to smaller shelters and opted to go to CBD so they could be close to the Culemborg site. No provisions were made for them at this facility, as it is currently a construction site,” said Badroodien.

The City has said that the Culemborg site, which is next to where the group are currently staying, will be ready by the end of this week.

The site is expected to only accommodate 96 of the estimated 180 homeless people living under the overpass.

Next:  Covid-19: Whatever unfolds in our prisons will affect all of us