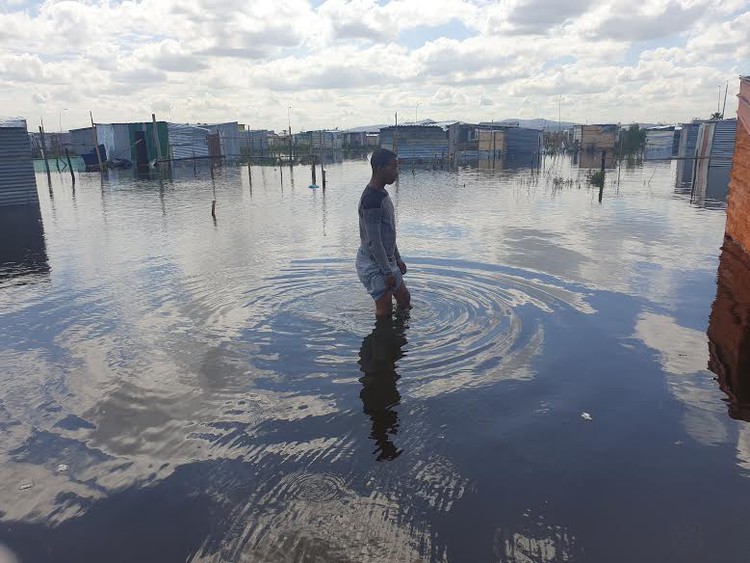 Residents of eThembeni informal settlement in Khayelitsha say they are living in “liquid shit” after a sewer pipe burst almost a month ago, leaving some shacks submerged in water.

The pipe, which burst on two occasions, on 17 and 20 August, has since been fixed, but the water that flowed into eThembeni remains, with water levels rising in rainy weather.

“The pipe burst from a drain in Nkanini, about a 15 to 20 minute walk away. It was blocked and then burst. So all that water flowed through right up to here. I remember it was around 4am when this happened, because we were woken up by water inside our houses,” said resident and community leader Vuyame Madikane.

Madikane said residents had asked the City of Cape Town to bring in a suction machines to clear the sewage but without success. “We are living in liquid shit, literally. And the municipality refuses to hear our cries. We’ve been to the municipal offices, we’ve phoned, received reference numbers, we’ve even protested. People from the stormwater department even came here and they did nothing,” said Madikane.

Residents took a memorandum of grievances to the Civic Centre in Cape Town on Monday. The memorandum was accepted and signed by Loyiso Tunce from Mayor Dan Plato’s office.

But Mayco Member for Water and Waste Xanthea Limberg said it was not sustainable to pump the water out. “The land on which this settlement was built is designed to flood when it rains,” she said, “ and given how resource-intensive the operation is, it is not sustainable to pump such significant volumes of stormwater from the retention dam into the sewers on an ongoing basis”. She said doing so would harm legal settlements.

Thulani Mananga, showed GroundUp his shack, with sewage rising up the walls. He said his belongings inside were ruined because of the water. He and others affected by the flooding have been living with friends or in a community hall.

“I had to throw away some of my groceries. My curtains and clothes are also ruined,” said Mananga.

Another resident, Bulelani Jack, said he had thrown out his bed which could not be saved.

Both Mananga and Jack moved to eThembeni when they lost their jobs during the Covid-19 lockdown and could no longer pay rent.

Mananga, who was in shorts, put on his black gumboots and took a few steps into the water to show it rising up to his knee.

Limberg said municipal staff had recently inspected the area and could not find “visible evidence of sewage contamination”.

She did not reply to GroundUp’s question of whether the City would provide any help to the eThembeni residents in terms of the flooding.

In a statement the Khayelitsha Community Action Network said “deprivation of basic services” was “a gross violation of human rights”, especially during lockdown. “This is not only a major health risk but a gross subjection to repulsive living conditions.” 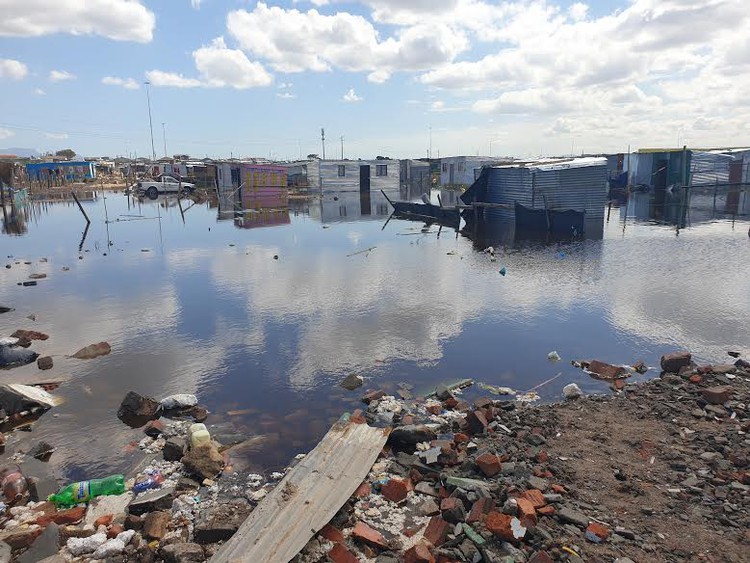 The City of Cape Town says it is not sustainable to pump the water out of the settlement, which is on a flood plain. Photo: Mary-Anne Gontsana

Mayco Member for Human Settlements Malusi Booi said: “Those who succeed in occupying illegally unfortunately do so at own risk, as there is a reason why the City has not designated some areas for housing.”

“The City does not have infinite resources. We always communicate to residents emphasising that we do not normally prioritise newly formed unplanned settlements at the expense of existing settlements for which we have made provision in our budget. The spread of unplanned informal settlements is thus simply unsustainable and immediate service demands are not always, if at all, possible to satisfy at the expense of other planned informal settlement spend,” said Booi.

He said sewer lines higher up were regularly blocked by inappropriate materials. The positioning of the shacks in eThembeni was preventing the water from draining away, he said.

Next:  Hungry children go hunting to get food