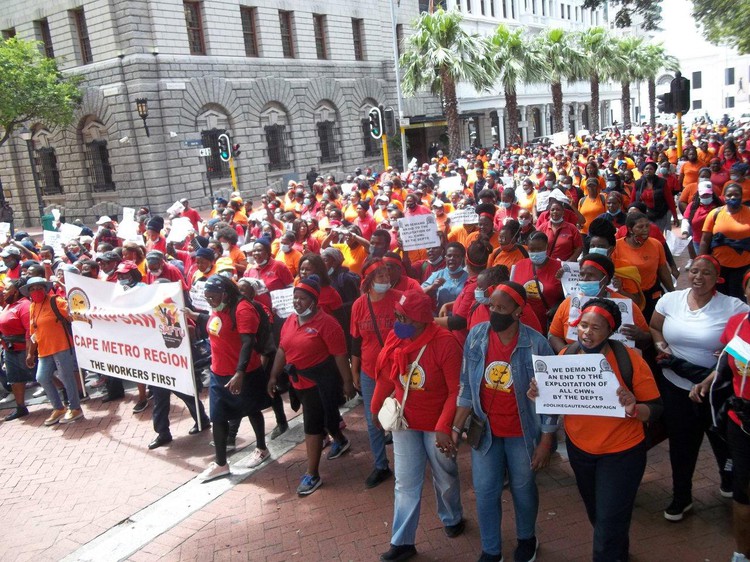 Thousands of health workers supported by NEHAWU took to the streets across the country this week demanding to be employed permanently by the health department. Photo: Vincent Lali

Khaya Xaba said the union had delivered memos in eight provinces, except in Gauteng. “These workers have been patient enough with the government and we feel that it is about time the government takes them seriously.” All provincial offices were given seven days to respond to the workers’ demands.

GroundUp attended marches in Cape Town on Wednesday and in Durban and Port Elizabeth on Thursday. We were informed on Thursday morning that the planned action in Gauteng was called off at the eleventh hour following negotiations with the provincial department to insource some workers.

On Wednesday in Cape Town, hundreds marched to the Western Cape Department of Health to demand to be insourced, to be given personal protective equipment, and danger pay.

Marchers were angered when the head of the health ministry in the Western Cape, Dr Douglas Newman-Valentine, came out to inform the group that MEC Nomafrench Mbombo was not available to receive their memorandum. Dr Newman-Valentine, however, promised that the department would respond within seven days.

NUPSAW provincial organiser Zama Sonjica said that Mbombo’s absence was an indication that she did not care about them. “The minister doesn’t see the health workers as important even though what they do in the community is the responsibility of the health department,” he said.

Zamile Mpondo, provincial chair of NUPSAW, said: “Community health workers wash our fathers’ and mothers’ wounds. It’s them who risk their lives and deal with Covid-19 patients without wearing PPE,” he said.

Nomawethu Sbukwana, Mbombo’s spokesperson said, “Mbombo was regrettably unable to be there in person, due to another official engagement at the same time … She has already received a copy of [the memo] which she is studying. She takes the concerns of community health workers very seriously and acknowledges the vital role they played during the COVID-19 peak when they were the ones doing community screening. And right now, they are ensuring that people are receiving their chronic medication.” 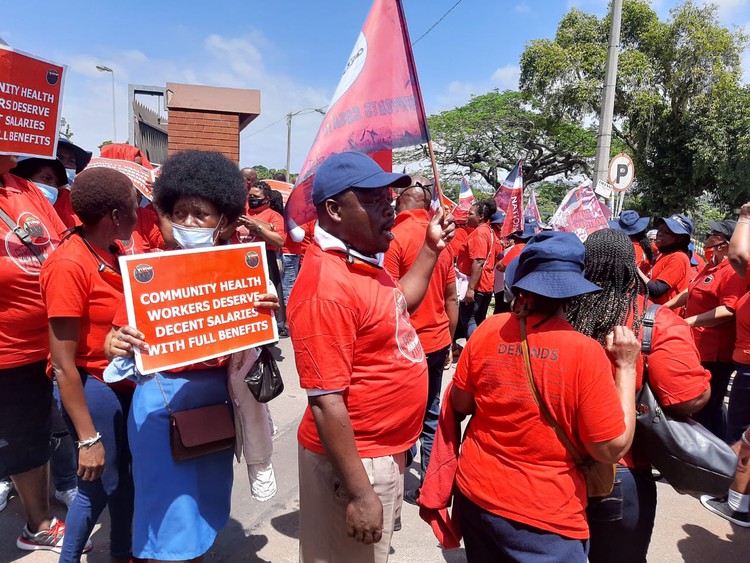 NEHAWU members outside the KwaZulu-Natal offices of the health department in Westridge on Thursday. Photo: Nokulunga Majola

In Durban on Thursday, over 200 NEHAWU members were joined by the South African Communist Party (SACP) outside the KwaZulu-Natal offices of the health department and eThekwini District in Westridge.

Health worker Lindiwe Buthelezi said: “We wake up early to screen people even before the outbreak of Covid-19. We are the ones who visit households without knowing the dangers we are getting ourselves into. We put our lives at risk everyday but we are not permanently employed.”

She questioned how health workers in Gauteng had been offered permanent posts and they were not. “Government doesn’t care about us because even after a person retires, they don’t get pension or anything,” said Buthelezi.

In a statement, the union also demanded that community health workers be paid directly by the government and for post-retirement benefits of R60,000 for workers over 60 to be introduced.

In Port Elizabeth, about 120 workers gathered outside the Eastern Cape Department of Health district office to hand a memorandum to Health MEC Sindiswa Gomba.

A worker based in Gelvandale, who asked not to be named, said: “Our hospitals are understaffed yet the department does not want to employ us on a permanent basis. This could have helped immensely to assist nurses who are already overwhelmed.”

NEHAWU provincial secretary Miki Jaceni warned the government against victimising striking workers. Jaceni said the union was contemplating staging a larger protest should their demands yet again not be met.

MEC Gomba told the workers that “everything that has been raised here will be discussed at national level.”

The provinces have seven days to respond. 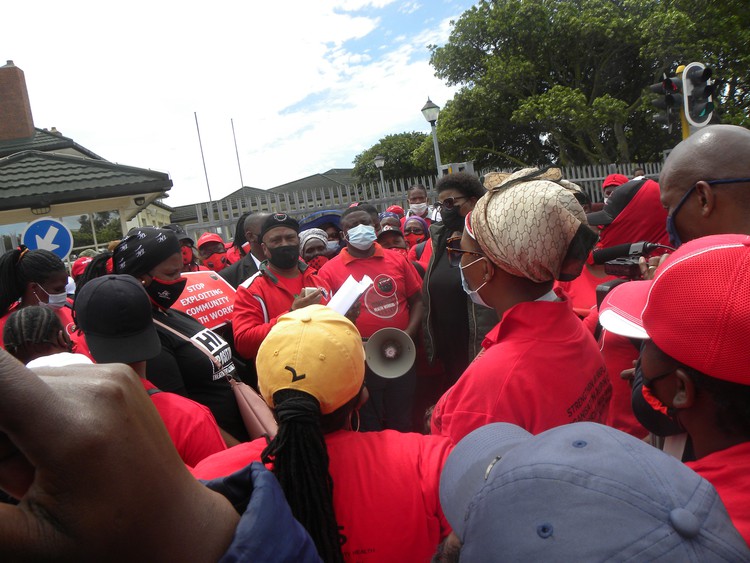 Next:  Police use rubber bullets to disperse housing protesters

Previous:  Will Covid-19 vaccines bring life back to normal in 2021?