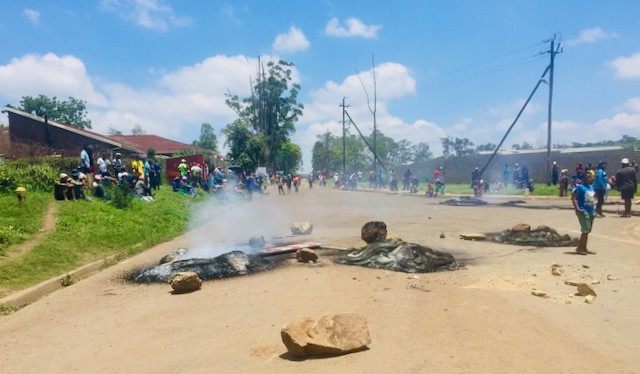 Residents of Sacca informal settlement, Pietermaritzburg, blocked roads and said they will boycott the upcoming local elections because of a stalled housing project and lack of services. Photo: Nompendulo Ngubane

Residents of Mkhondeni’s Sacca informal settlement, Pietermiaritzburg, blocked all access roads to the area on Thursday, demanding to know what is happening with a housing project promised in 2017. They also want proper roads, formal electricity and water to be supplied, and garbage to be collected.

Roads were blocked with burning tractor tyres and rubble. Many people were unable to get to work. Some nearby firms could not operate.

Police used rubber bullets to disperse more than 300 protesters, some of them carrying sticks and singing struggle songs.

Musa Mpungose, a protester, said: “Three years ago we were promised low-cost houses … We started to voice out our problems in 2001 … In 2016 the municipality promised us electricity. The following year, in 2017, they told us they cannot start the electricity project while we live in shacks. They said they will start by building us houses. There was a sod turning [ceremony] that was done in that year. That was the last time they spoke about it.”

He said the community had decided it would not participate in the local elections. “Whether we get these houses or not, no political party will receive a vote from us,” he said.

He said 3,000 residents share one communal tap and there are no toilets. People use the bush.

Linda Zuma, also protesting, said, “The government has forgotten about us … The mayor must come and address us. He must tell us what happened to the housing project and other service delivery.”

Zama Thusi said, “We have lost people who have been electrocuted because of the illegal connections. It’s true we steal electricity. We do that because we don’t have a choice. It’s not right but that is what we are doing.”

She said the road was in such bad condition that when it rained it was impassable.

Ward Councillor Sandra Lyne (DA) said the housing project was stopped because government will not allow any more temporary houses to be built. Mafumbatha had said only permanent low cost rental housing was to be built.

Lyne said Sacca informal settlement is on private property. She said it is “a long-standing and complex problem, but every time there is an election the governing party politicians go in there promising them housing and basic services but nothing is ever done.

“I have managed to get more taps but they get broken. I really do understand why they resorted to the protest because no matter what I do or the ward committee does … no progress is happening.”

Next:  Kirkwood erupts over vigilante violence