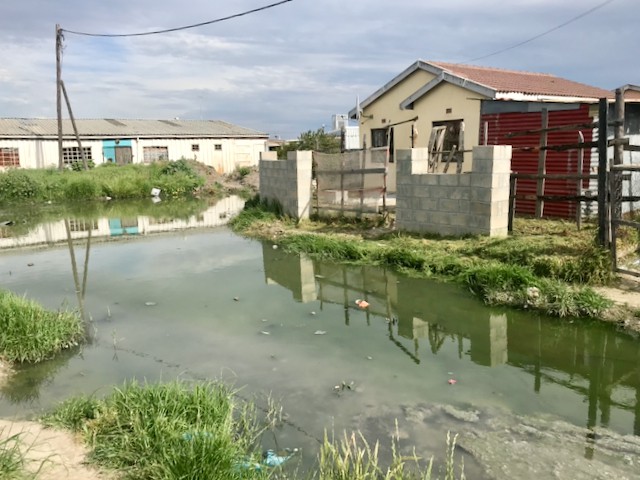 Residents say they don’t use Ntulo Street anymore because of this dam of sewage. Ncedani Magaza said it has been this way for three years. Photos: Tariro Washinyira

This December will be the third year celebrating Christmas in sewage for residents of Victoria Mxenge in Philippi, Cape Town.

They have been battling with overflowing sewers and blocked drains since 2019.

Residents say they have done all they can to get the attention of the City of Cape Town and even national government, including protests and appealing to the South African Human Rights Commission (SAHRC).

There was an “oversight visit” on 10 June led by the City’s human settlements directorate. It included, among others, representatives of the Ministerial Advisory Panel for the national Department of Human Settlements and also the SAHRC.

But nothing changed, says community leader Patricia Matolengwe. She said the authorities also held a meeting in September to discuss the matter but “we were not invited and didn’t get feedback”.

In October, Matolengwe said households each contributed R50 to clean up the drains at the crèche and community hall. “To fix all the roads we need to contribute about R260 per household but people said they don’t have money. That is why some roads still have blocked drains and flowing sewage,” she said.

Ncedani Magaza has been staying in Ntulo Street, Chris Hani in Site C Khayelitsha, where a blocked drain sparked a protest on 28 September. The dam of sewage water it has formed near his house has been there for three years, he says.

On Wednesday, he said the dam of stagnant sewage has still not been fixed. Trucks come regularly, but the workers just look and go without doing any repairs, he says.

“People can’t use the road any more because of stagnant sewage water. For three years we have been using a narrow pathway. The puddle is deep and dangerous. I have rescued young children and drunk people several times from that stagnant pool of wastewater. Children from the houses facing the blocked drain don’t play outside any more,” said Ncedani. 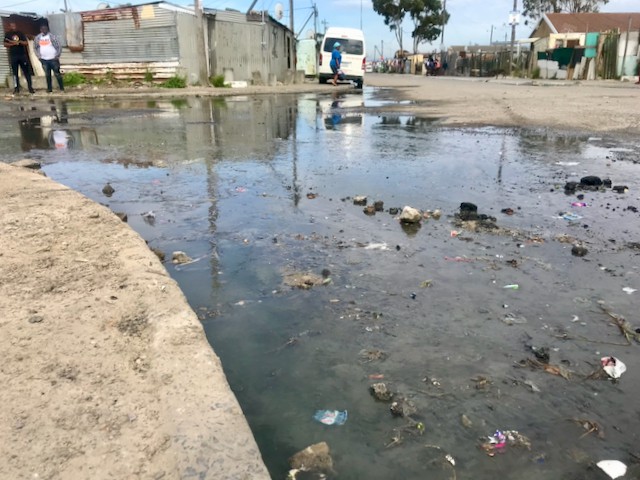 Sewage is also flowing down the roads of Taiwan in Site C, Khayelitsha

Bonga Zamisa, community organiser at the Social Justice Coalition (SJC), said that in June they visited Khayelitsha with committee members and reported blocked drains to the City and got reference numbers. In September, they followed up with the City with no success. Now it’ is December and the drains are still not fixed.

“We are calling the City to attend and to not politicise the issue of drains in and around Khayelitsha, with urgency. When it is raining it’s worse; the houses become flooded with poo,” he said.

Mayco Member for Water and Waste Councillor Zahid Badroodien said, “Vandalism of the Philippi West pump station and dumping into sewers are the causes of chronic overflows in this area … The pump station was unfortunately not operating since January when it was most severely vandalised. Prior to this it was also vandalised.”

“The pump station has been operational since November. A second pump was installed on 1 December 2021.”

In a statement issue on 30 November the City said: “The Water and Sanitation Department is launching a sewer spill reduction plan to help contend with more than 300 sewer blockages and overflows in the City every day.”

It said its target is a 50% reduction by 2030 “through a combination of strategic upgrades, intensified proactive maintenance, more efficient use of resources and community education”.

The City plans to spend, in the next three years, over R10 billion of its R29-billion capital expenditure budget on water and sanitation infrastructure; R1.6 billion specifically for conveying sewage.

Next:  Filthy Mthatha is a pigsty, say residents