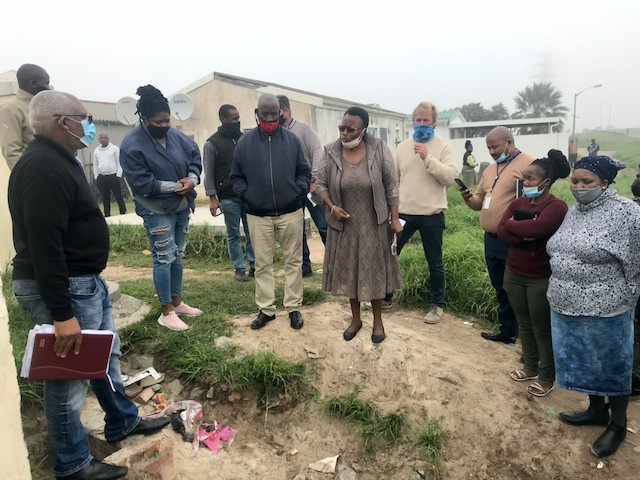 After residents brought a new housing project to a halt last month, an oversight visit took place in Victoria Mxenge, Philippi last week. Residents are demanding that the City of Cape Town find a permanent solution to sewerage problems in the area before connecting new houses to an overburdened system.

SAHRC provincial commissioner Chris Nissen said, “Every street I walked there is sewage gushing out of the drains and running into the streets. There is even half a dam there with sewerage water and on the other side there is raw sewage.”

According to Johan Fowler, an engineer employed by the City, the problem in Victoria Mxenge “is not only the sewer”. He said, “There is a main water burst in a couple of places, damage on the road way, potholes that have been created.” He said it may cost roughly R7.5 million to fix.

Residents showed the visitors the pipe for the new houses that would connect to their sewer system.

Thozamile Botha, a member of MAP, queried Fowler on the adequacy of the pipe. “You know that in this community a large number of people would use newspapers. Is that not supposed to be addressed before you design? The reality is that if you are dealing with a poor community you know their challenges and therefore your infrastructure should be designed to address specific problems of that community.”

Fowler replied, “Newspaper is a huge problem for the pump station because it does not break up like toilet paper. You can not design your way out of a problem like that .”

Community leader Patricia Matolengwe said, “I am happy that at least they came to the community to see for themselves, to see why we do not want them to connect to our overburdened system.”

But resident Buhle Jalisa said she was not satisfied. “We have been sitting with this sewage problem for years.”

“We left our demands and letters of complaints during protests at Fezeka [subcouncil office]. They did not bring any documents for the meeting and they appeared not to be aware of the gravity of the situation.”

Mayco Member for Human Settlements Councillor Malusi Booi said, “A meeting was held on 3 June 2021 to listen to the community’s concerns and to try and resolve the matter. Victoria Mxenge’s leadership was briefed at this meeting, and requested the site visit which took place on 10 June 2021. It is not always possible to answer questions accurately on site.”

He said Fowler’s advice would be forwarded to the relevant department. “A formal cost estimate has not yet been derived, but there is merit in the comment in that if there are leakages, they must be repaired.” 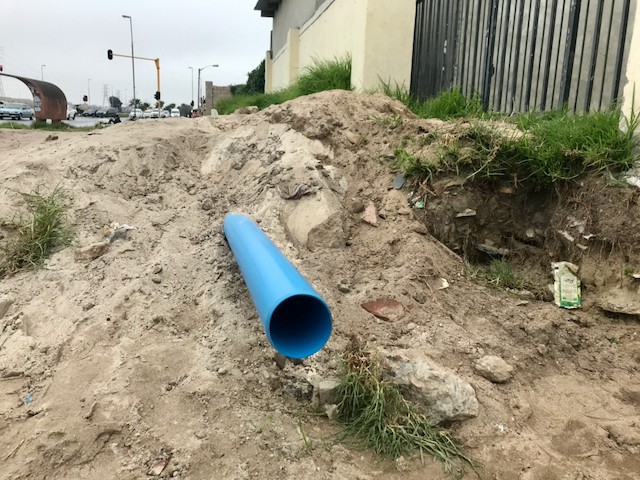 The sewer pipe from the new development which residents of Victoria Mxenge do not want connected to their system.

Next:  The life and death of an immigrant dog whisperer