We are living in sewage, say Khayelitsha protesters 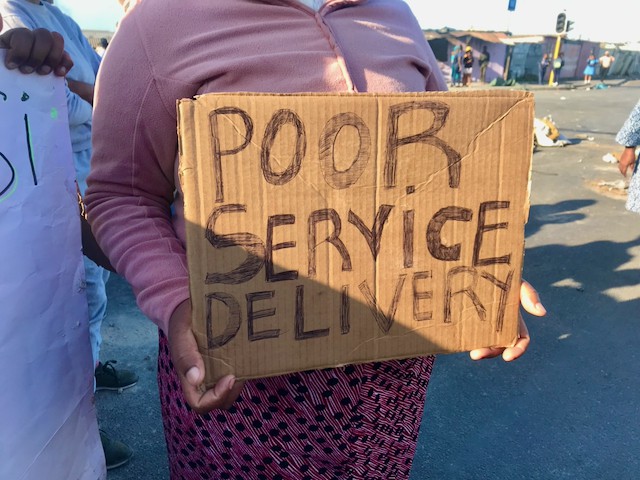 A resident of Khayelitsha Site B, Cape Town, holds a placard in a protest on Tuesday morning over sewage problems in the township. Photo: Tariro Washinyira

On Tuesday, residents of Khayelitsha Site B protested over blocked drains and sewage running down their streets and into their homes.

About 80 people blocked roads on the corner of Mew Way and Aliam Drive at 6am and demanded that the City of Cape Town come up with a solid plan to resolve the ongoing problem they have with sewage.

Taxis and private vehicles were turned back. Placards read: “Sidiniwe uhlala nekaka phantsi ngekaka” (We are tired of staying with faeces, down with faeces) and “The City of Cape Town is failing us”.

This is the third protest over the issue since February, according to Ludwe Vara, secretary of the Victoria Mxenge housing project. He said last week there were sewage blockages at the school toilets and the local clinic.

“No one can accept to live in such conditions … We have been living in sewage since February. Both informal settlements and formal houses are affected by this problem,” said Vara.

Phelisa Seti says she has been living in Site B for 35 years. “We want our dignity as black people to be respected. We have been living in these difficult conditions for a long time and the City is ignoring us.”

Vara said the sewer system dated back to 1986, before there were informal settlements, and it had not kept up with population growth. Vara said the City should dedicate enough resources to Khayelitsha to deal with the problem, and fix the sewage treatment plant.

The protesters refused to disperse until City officials addressed them. Warrant officer Groenewald of the SAPS made several calls before the City manager for water and sanitation, Pierre Maritz, arrived at the protest.

Vara told him that they had left memorandums at the Khayelitsha training centre depot, but the City had never responded. He said Ward 94 Councillor Patrick Mngxunyeni (ANC) had promised to take the matter up with the City but he too never came back to them.

Vara told Maritz that in June the community took officials from the mayor’s office on an inspection. The officials took pictures but “never came back to us”.

“Sometimes when the City sends people to fix drains, City workers take a break at 11am, return at 2pm, then an hour later they pack up and leave,” Vara complained to Maritz.

“I have listened, made notes, and will react officially through our structures,” said Martiz.

In a statement on Tuesday, Mayoral Committee Member for Water and Waste Xanthea Limberg said the City had received a memorandum of demands and would respond.

Limberg said, “Dumping into sewers remains the cause of the majority of blockages/overflows. The City clears these blockages as they are reported, however to solve the problem completely, communities need to be made aware of what can and cannot be safely flushed or washed down the drain.”

Limberg said over the next two financial years the City would upgrade sewage infrastructure in Site B and Site C, Khayelitsha, “but this will not solve the overflow problem unless residents use the new infrastructure for its appropriate use”. The Site B sewer pump station upgrade would be completed at the end of October 2021, she said. The pump station served about 8,000 households but had been “so severely vandalised in February, that it could not function, resulting in major overflows and blockages in the network.”

This article has been updated with the statement by Xanthea Limberg.