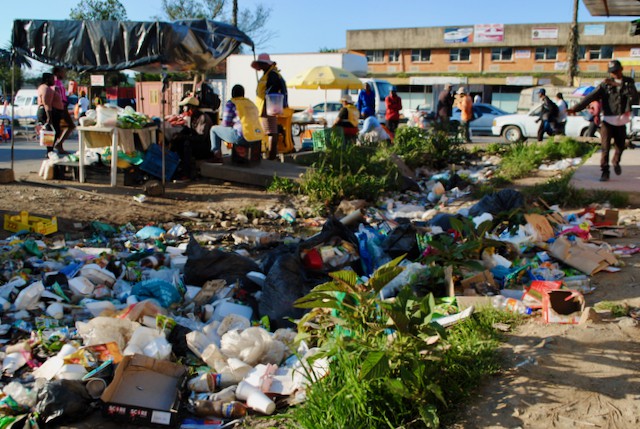 From villages to the townships to central Mthatha, uncollected rubbish is piling up on the pavements and overflowing sewage runs down the streets.

Hawkers say they have had to abandon their food stalls. Dogs and livestock tear apart refuse bags. In the villages people say they have to resort to burning the rubbish. Sewage and water leaks from gullies, eroding the dirt roads.

“It is not true that refuse is not collected in townships. The municipality is operating with an approved schedule for collection of refuse in billed households once per week. Dedicated refuse trucks and teams of workers are allocated for the refuse and run daily as per the refuse collection schedule.”

“However, the service gets interrupted only if the trucks are in for repairs and a contingency plan is used to clear the backlog,” says Pakade.

GroundUp has seen a few skip containers collected by the municipality in some areas. Yet we’ve also seen the undeniable problem Mthatha has with filth and overflowing sewage.

The biggest and busiest taxi rank, Mamela, carries an unbearable smell of sewage and rotting garbage. Hawkers who sell fruit and vegetables sit under their umbrellas next to a stream of sewage. In its path lie piles of uncollected rubbish. It has been lying there for weeks.

Noxolo Lugwali said she had been selling fruit here for ten years. She said it has never been a clean town, but years ago it wasn’t so bad that it hurt her business. But now she sells ID holders, steel wool, nappies and masks because no one will buy fruit next to raw sewage.

“My stall is next to a sewage drain that constantly blocks and rubbish gets stuck in it … I tried to find a different place for my stall, but other hawkers chased me away … I don’t blame them because this town is overcrowded and there is tough competition.”

Lugwali lives in Joe Slovo Park. She said rubbish is not collected. As a result, “some of the people dump it next to the road and on open fields; some burn it in the evening. But that causes fights … The smoke makes the laundry and washing line dirty. Some of the residents suffer from asthma and they end up fighting.”

Lugwali said they held meetings asking the municipality to create jobs for them to pick up litter in groups. “We wanted to do this job because the municipality is failing to clean our townships and there are no cooperatives like in other municipalities … But they always tell us that there are no funds to do that,” she said.

“Our customers are confronting us every day for running businesses in these pigsty conditions,” said another hawker in the city centre, Vuyokazi Kheswa.

“My fruit stall is no longer profitable. I am able to feed my two unemployed children through the money I generate by selling airtime.”

“I was born and bred here in Mthatha. Our municipality is one of the filthiest municipalities in this country. I was working in Cape Town and came back here in 2012. The condition of this municipality does not get better; instead it deteriorates,” she said.

“Sometimes we borrow rakes from the Mamela taxi rank officials and clean this place ourselves. On wet days, this stream of sewage overflows behind us into our stalls.”

“The municipal workers don’t come and collect the refuse bags that we put next to the road for collection. The bags stay here until the dogs damage them again.”

The Mamela taxi rank itself is a mess and a taxi association official described how their efforts to clean it had come to nought because of lack of municipality effort. 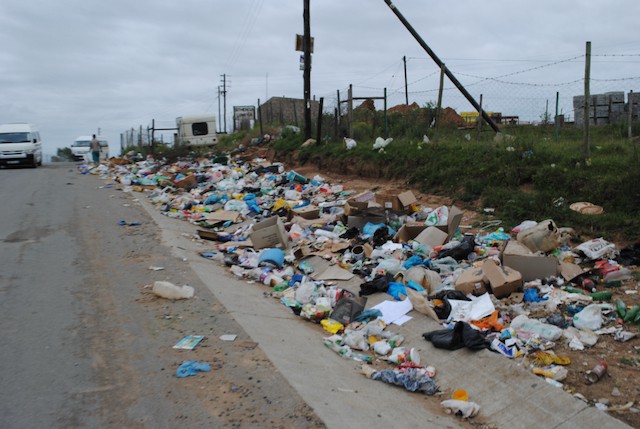 But according to Pakade, the municipality has a skip at the taxi rank and it is cleared three times a week and recycling bins have recently been added.

He said illegal dumping and sewage leaks were a challenge and “the municipality is doing its best”.

“Council has just approved a Waste Management Turnaround Plan that is supported by SALGA and OR Tambo District Municipality,” he said.

Things looked especially bad in Mqanduli in Makhenkesi township, about 35km from Mthatha. Here residents said rubbish had not been collected for three months.

Standing next to a pile of rubbish full of used nappies, Siphumle Booi said, “For three months rubbish has not been collected and we have not received an explanation from the municipality. The community is dumping it on an open field at the back of the RDP houses.”

But according to Pakade, “At Makhenkesi township, currently there are two skip bins … cleared twice a week.”

He said, “Cleaning in Makhenkesi is done on Wednesdays, Thursdays and Fridays every week.” 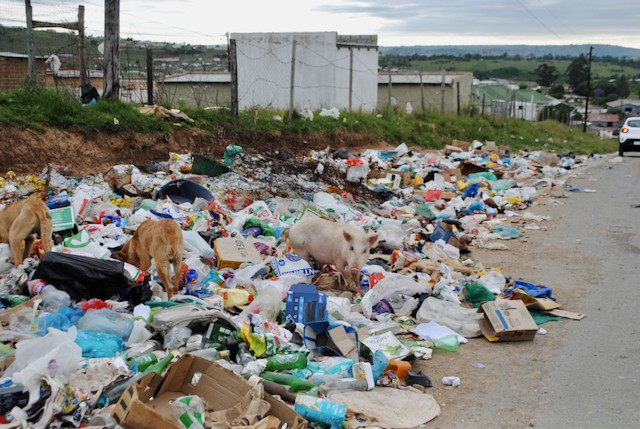 Pigs and dogs forage on rubbish on the streets of Mthatha

Previous:  Victoria Mxenge residents dream of a Christmas without the stench of raw sewage