Sewage is flowing like a river here, say Philippi protesters 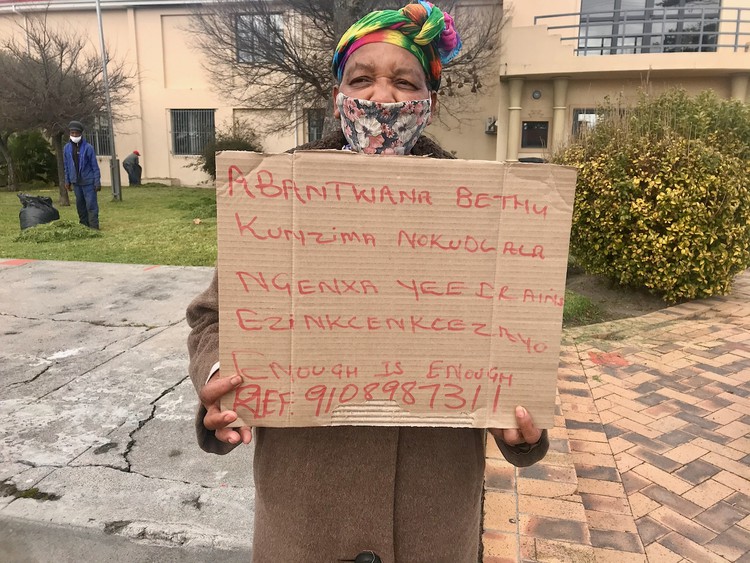 Residents of Victoria Mxenge in Philippi protested outside the Fezeka subcouncil offices in Gugulethu on Thursday, complaining that their streets had been flowing with sewage since December. Photo: Tariro Washinyira

About 30 residents of Victoria Mxenge in Philippi protested outside the Fezeka subcouncil offices in Gugulethu on Thursday. They were demanding that the City of Cape Town resolve the problem of overflowing sewage which has been plaguing the community since last year.

They handed a memorandum to Kholisile Maphekule, a City official.

“As from December we have been suffering from blocked drains at the same time we are fighting the Covid-19 pandemic. We have reported this several times with no follow up or assistance. Now enough is enough,” it states.

Protesters maintained social distancing, holding placards displaying references numbers of their complaints to the City about the sewage problem, and photographs of the situation.

Placards read: “If we were in Constantia this should have been stopped long ago” and “Abantwana Bethu kunzima nokudlala ngenxa yee drains ezinkcenkcezayo” (It’s hard for our kids to play because of these leaking drains).

Community leader Patricia Matolengwe told GroundUp that they were fed up with the City’s excuses. “We requested the City send trucks that can drain the sewer at least once a month until they find a permanent solution but they are ignoring the request. They sent a truck to drain only once in May. The situation is very bad. Some residents’ toilets are bubbling up … We are worried about [our] children.”

Vayithi Mkhize showed GroundUp five reference numbers, three of his own and two of his neighbours, from when they reported the blocked drains and overflowing sewage.

Mkhize owns a spaza shop but with clouds of flies, a strong stench and fears that his goods were contaminated, customers started shunning his shop.

“I have lost business. Sewage is flowing like a river, from the kitchen door spilling into the yard. I can’t serve my customers; it’s smelling. I have complained to the City of Cape Town several times but they don’t want to hear me out, so today I joined the protest,” he said.

Mayco Member for Water and Waste Xanthea Limberg said that the pump station in Philippi West has in the past been prone to multiple cable thefts, and the facility has been badly damaged in the process.

“Repairs after theft and vandalism are also currently being delayed due to imposition of lockdown. However new parts have just arrived (on 3 August) that will allow the City to use mobile generators to power the pumps again during the day. This should hopefully alleviate the situation somewhat. It is not possible to use mobile generators at night due to risk of theft in the area,” she said.

For a longer term solution Limberg said the City intends to change supply to the facility from low voltage to medium voltage in order to create an additional challenge for criminals.

Next:  Telling the Covid-19 story with puppets