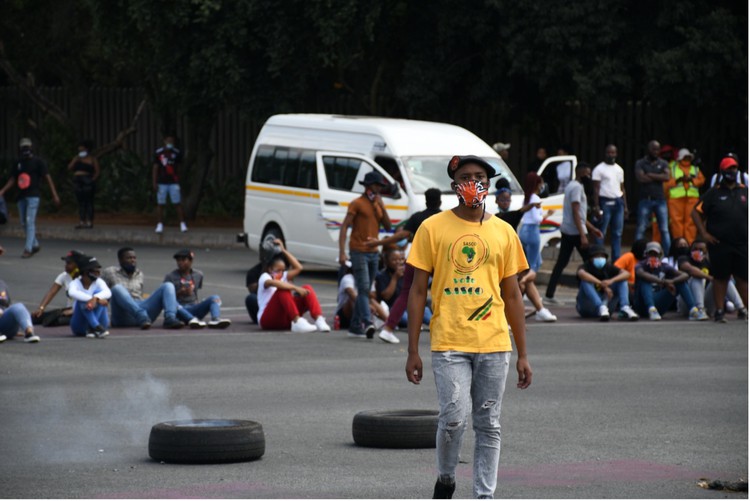 Students at the University of Johannesburg blocked the roads at Auckland Park campus. Photo: Julia Evans

After attempting to meet with University of Johannesburg (UJ) management, over 100 students led by the South African Students Congress (SASCO) and the Economic Freedom Fighters Student Command (EFF SC) marched along Kingsway Avenue and blocked University Road outside the Auckland Park campus.

The students said they are demanding free and decolonised education, and for all students to be allowed to register. They want the Vice-Chancellor Tshilidzi Marwala and Minister of Higher Education Blade Nzimande to answer them.

“The universities are not going to operate until they meet our terms,” said a UJ student and SASCO member. The student said they will disrupt lectures as well as online lectures.

EFF student command convenor at the Aukland Park campus, Siyabusa Mnisi, addressed the crowd: “Government does not want to meet the SRC. He’s [Nzimande] acting like a celebrity and the whole world must know. That man is all over Twitter but when you go to his office he’s busy.”

“Marwala still sees UJ as RAU [Rand Afrikaans University closed in 2004]. He hasn’t changed anything. We are still colonised in education.” 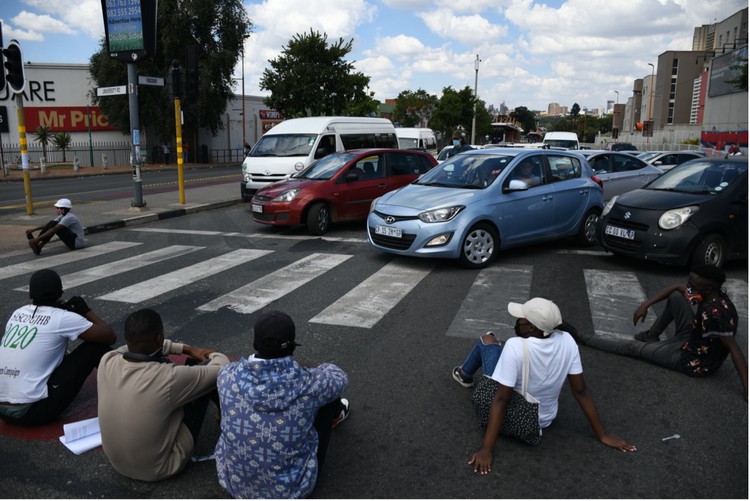 Protestors then lay on the ground to block traffic.

Mnisi said, “Discipline must prevail here. You don’t break anyone’s car. You don’t burn anyone’s property. You don’t fight any police. Don’t fight the security. They are not the enemy. The enemy is the man sitting up there, Cyril Ramaphosa. The second enemy is that man called Blade Nzimande and our third enemy is Tshilidzi Marwala. Those are our enemies. If the person in front of you is not those three, you are destroying the wrong person.”

Many protestors refused to speak to reporters and told the media to leave.

Police monitored but kept their distance. Mnisi addressed them, saying, “Police, we see you here. We never invited you … We want to believe you are here in good faith to protect these students from any kind of assault. We have had enough of how the police are treating us.”

Several South African universities have once again been under pressure from students who have raised several concerns around funding through demonstrations, as was the case at UJ, when some students demonstrated in the streets around the campuses. The University’s academic programme continued as planned/scheduled as the first term is largely online.

University spokesperson Herman Esterhuizen told GroundUp, “The University’s academic programme continued as planned/scheduled as the first term is largely online. The University is mindful of the concerns raised by the students and is making every effort to provide support, within the limited fiscal environment. The UJ Council also granted permission for NSFAS eligible first time entering students to register without paying the required registration fee, this year. We are assisting these students with this process. Currently, we have progressed very well with registrations and, to date, have registered more than 10,500 students, which represents over 97% of the planned 10,871 new undergraduate first year students.”

He said: “A total of 2,532 NSFAS eligible students have registered and we continue with our efforts to assist those who have not. For the interim period, the University has granted the fully admitted but not yet registered students access to our [online] learning system.” 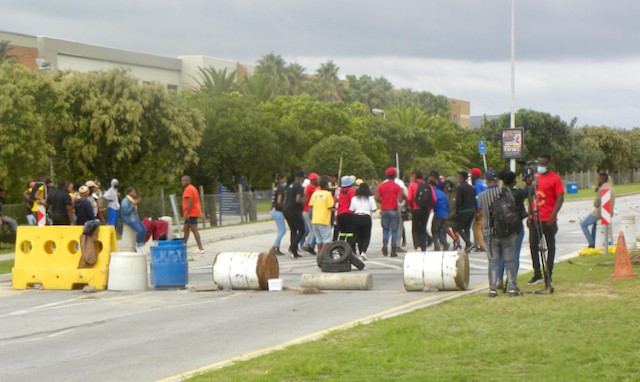 Nelson Mandela University in Gqeberha was shut down on Monday. Led by the EFF, students barricaded all entrances to the institution from early in the morning.

The students divided themselves into small groups to guard the entrances ensuring no vehicles could access the university. Protesters said they wanted to remain in small groups to maintain physical distancing.

Siphosethu Loli of the EFF said the university was blocking students from registering before they cleared arrears from the previous academic year.

“We have listed non-negotiable demands to the institution. We are demanding a written response because we have been in several engagements with them but there is no progress so this time around they must respond to us in writing.”

“We are demanding the scrapping of historic debt and free registration. There should be no academic financial exclusion. They must provide data and laptops especially to first year students. … It will be futile to continue this term because there will be no students … There is a huge number of students who have not been registered.”

A student who completed a diploma in Information Technology said the university was barring him from registering for an advanced diploma because he owes R1,300.

“I am even shocked how I accumulated that debt when everything was funded by NSFAS,” he said.

A joint statement by Nelson Mandela University Management and the SRC on the outcome their meeting said agreement was reached on a number of issues:

Since Nzimande’s announcement of additional funding for NSFAS, more than 18,000 students have been given NSFAS funding status, with more than 4,500 students registered at the Universityon the weekend.

The university’s admissions office is working to finalise about 2,000 “change of mind” applications from admitted students whose final matric results did not qualify them for their desired first choice.

The university is now in the process of clearing all academically deserving, but financially needy students, who meet the concessions criteria, for registration upon signing an Acknowledgement of Debt form.

The university is poised for a staggered start to the academic year. More formal academic work will begin from Tuesday, 23 March 2021, onwards.

“Senate decided that there will be no automatic academic exclusions. Students who would otherwise be excluded based on their academic performance will be allowed to return, and will participate in a programme to support them in their academic journeys,” the statement said.

“Mandela University is mindful of not only the prevailing funding challenges nationally, but also the impact of the coronavirus pandemic on students and their academic performance in the past year. The University remains resolute in its efforts towards student access for success, while also working to ensure the continued financial sustainability of the institution,” said the statement.