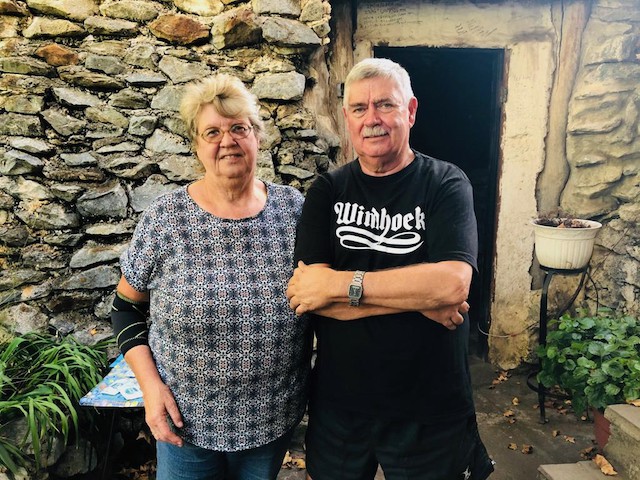 Albert and Hettie Rogers have run the Historic Grutte Bush Pub for almost 20 years, but, they claim, the South African National Defence Force wants to evict them. Photo: Kimberly Mutandiro

The historic Grutte Bush Pub on the old Marievale mine has been going for about 20 years. It has been in the hands of Albert and Hettie Rogers for almost a decade, but for the past year they have been living in limbo, facing eviction, they say.

They claim they are being harassed by soldiers from the Marievale military base and their water was cut off. The SANDF denies this.

Located directly adjacent to the Marievale Military Base on portion 281 IR Vlakfontein, which used to be mine property, it is nearby beautiful woods, a bird sanctuary and the graves of mineworkers dating back to the 1940s.

On weekends, the pub bustles with bikers and visitors curious about the mine experience. The stone pub has underground passages with mine memorabilia where mine workers used to train. People have written their names on the walls and children have left their handprints. Sometimes there are treasure hunt games. Behind the pub is a closed mine shaft.

But the pub is now under threat.

“On one afternoon during last year’s hard lockdown, while my husband was away on business, a group of soldiers came claiming that the place belonged to the army and that we had to move,” Hettie told GroundUp.

“After taking over the pub, we paid the old pub owner who played as a middle man between us and a gentleman who took over the land from his family. We understand that the land was acquired through a gentleman’s [verbal] agreement with the owner of the old mine,” says Albert.

The couple went on to fix the place up and they have invested money to operate the business as a long-term project. They employ eight people. 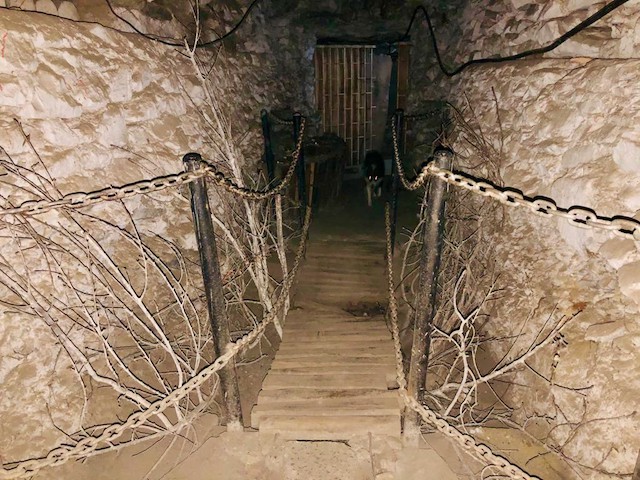 The stone pub has underground passages with mine memorabilia where mine workers used to train. People have written their names on the walls and children have left their handprints. Sometimes there are treasure hunt games. Photo: Kimberly Mutandiro

Karel Koekemoer, one of the regular customers, said, “The Grutte Bush Pub has become one big family since I was introduced to it in early 2000.”

“We have come to love the place. Not only do we rely on the pub as a source of livelihood but this is our home,” says Hettie.

“In September the army came and cut off our water which was connected to the Marievale Military Base. We have had to rely on our loyal friends who bring us water every week.

“The army also chased away municipal workers whom we had asked to install a meter so we could use our own water separate from the military base,” says Albert.

“Over the years we have witnessed different mining companies touring the area. There are lots of mining interests around the land which makes us believe that the planned eviction has something to do with mining,” said Albert.

Louise du Plessis of Lawyers for Human Rights says they wrote to the army. “We have drafted papers following which we got written confirmation that the army will not again prevent the municipality from installing water pipes,” said Du Plessis.

“The bar is supposed to be declared a heritage site. It is of historical importance. If there are indeed any planned mining operations on the land the pub will be destroyed.”

But Captain Vincent Sello, a spokesperson for the SANDF, denied allegations that the army had cut off the water. He was unclear on whether or not the portion of the land housing Grutte Bush Bush Pub belongs to the army.

“The army has no right disconnecting water going to another person’s house; it is the business of the municipality. The matter should be referred to the municipality to investigate. What proof is available to show that the army interfered with the pub? Those are mere allegations. The military would have no business claiming land which is outside it’s area of responsibility. We do not have business around bullying people outside the military area. It’s not our responsibility to deal with issues of land.”

Yet the City of Ekurhuleni confirmed that the land belongs to the SANDF, and that the military plans to evict the residents. In a statement, Nhlanhla Cebekhulu, a spokesperson for the City, said, “Some occupiers of the property had connected water from the Marievale Military Base while their activities had nothing to do with the military base. Upon discovering this, the military base disconnected the supply and advised the occupiers to apply directly to the municipality.

“The occupiers claimed to have been allocated the piece of land on what is now a non-operational mine. The issue was raised with the SANDF and the occupants were advised to contact the municipality in this regard. The SANDF owns the land. Furthermore, there is a planned eviction by the military from the land. The City is not involved in the planned eviction,” said Cebekhulu.

The City said it has no knowledge of any mining plans.

CORRECTION: The article originally incorrectly stated that the Rogers have owned the pub for 20 years.

Next:  Labour Department to probe “poor conditions” on Cape farm