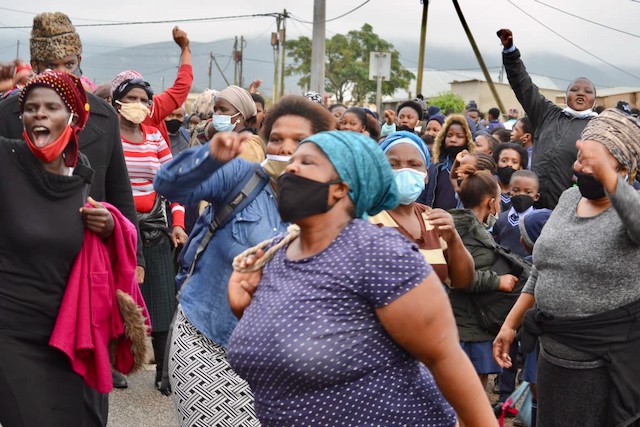 They were demanding the completion of the much-needed, new R68-million construction of new Noninzi Primary in Area 10 in Gunguluza. But the school governing board (SGB) said Alex Maintenance and Electrical Services had indicated it will leave the construction site this week due to an outstanding payment from the Eastern Cape Department of Education.

The company refused to comment saying it was a matter between them and their client.

Parents, who were joined by over 900 learners in their uniforms, protested and locked the gates to the 22 prefabricated classrooms of old Noninzi Primary School.

Some teachers sang with the protesters, “Thina silwela amalungelo ethu” (We are fighting for our rights).

A teacher, who spoke on condition of anonymity, said, “When we teach in those prefabricated classes, big rats often pop out of the plank floors … We only have two toilets for females and one toilet for men. We always queue when we want to use our toilets which are themselves inside prefabs. Our prefabricated classrooms have holes.”

She said the windows had burglar bars making it impossible to open them. “The only air we get is when we open the door,” she said.

She said all 27 teachers at the school had had Covid-19 last year, and the principal and his deputy had died from Covid-19 (as was widely reported).

Chairperson of the SGB Aletta April said she was disappointed that the new school has been under construction since 2017. She said if the contractor was not paid they would move into the new school, even if it was incomplete.

Eastern Cape education spokesperson Malibongwe Mtima said, “The Department has had cash flow challenges in 2020 which led to late payments of invoices of contractors and implementing agents. However, the funds to complete this project have been prioritised and set aside in 2021.” Mtima said the contractor would be back on the site by 1 April.

Next:  Students barricade universities in Johannesburg and Gqeberha

Previous:  A Mitchells Plain mother whose sons were murdered joins march against crime