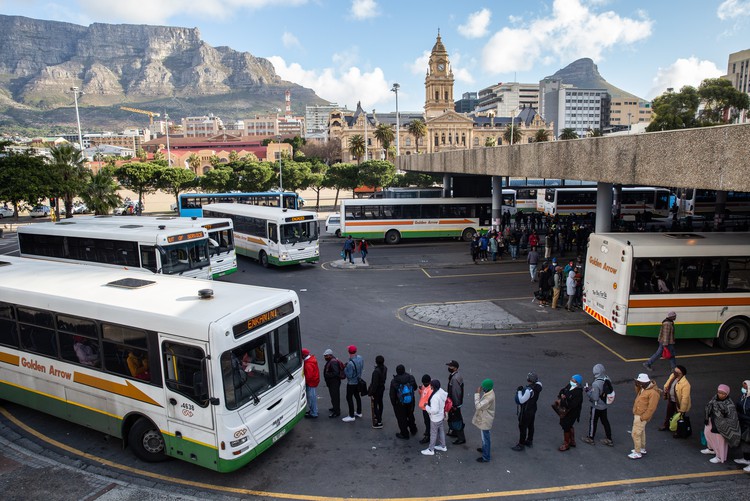 Commuters wait for a bus at the Cape Town central station on 20 July 2021. Photo: Ashraf Hendricks

Starting Monday, the minibus taxi route (B97) between Bellville and Mbekweni (Paarl) will be suspended for two months. This comes after violence between rivals Congress for Democratic Taxi Associations (CODETA) and Cape Amalgamated Taxi Association (CATA) has left 82 people dead this year.

In a statement, Western Cape Minister of Transport Daylin Mitchell said, “Attempts to resolve the conflict have been unsuccessful.”

Route B97 is the main cause of the current conflict between the CATA and CODETA taxi associations, which both claim to have the right to operate on it. The Dunoon Taxi Association (DTA), which is not under the two taxi umbrella bodies, said they have suspended their Bellville and Nyanga routes.

Many other areas, including Khayelitsha, Nyanga and Langa, will have limited minibus services.

Mitchell has invoked Section 91(2) of the National Land Transport Act to close the route, as well as the lanes and minibus taxi long-distance route facilities at the Bellville Public Transport Interchange. On Friday Mitchell said the decision had been taken after consultation with the SAPS, the Premier, and the National Minister of Transport.

The conflict has affected many, including small traders and minibus drivers not associated with the rival taxi associations. In order to keep workers safe, some businesses have had to put their staff in hotels.

The reopening of schools for the third term on Monday has raised concerns over how learners will get to school with the current disruptions.

The Congress Of South African Students (COSAS) in the Western Cape Province said in a statement that some matriculants already missed winter school classes over the school holidays due to the taxi violence.

In a statement released on Monday, COSAS said many learners didn’t go to school for the first day of the third term due to fears of violence on the road or a lack of taxis available for transport. The organisation said that school transport was also not available in some Cape Town townships.

A source from Belhar High School said that the school has many learners that travel from homes in Delft, Khayelitsha, and Bishop Lavis, mostly via minibus taxis but also buses. He said that he is sure there are learners that have been negatively affected because parents would not be putting their children on taxis if there are risks of violence.

At this stage, he said, it is difficult to determine the exact effect of the taxi violence on attendance, since the learners’ school attendance is on “rotation” due to Covid-19 protocols.

“We would only be able to determine later in the week whether there was a direct impact in terms of bigger numbers. If this taxi violence escalates further, it will have an impact on our learners,” said the source.

Western Cape Education Department (WCED) spokesperson Bronagh Hammond said that there have been “reports of schools that have lower than usual learner attendance numbers due to the taxi violence and disruption, particularly in the City Bowl and surrounds.”

“These ‘commuter schools’ generally have a high enrolment of learners from areas on the outskirts of the city centre, with learners travelling on public transport,” she said.

One taxi association that commutes learners privately also did not operate on Monday.

However, no incidents of violence towards learners have been reported to the WCED.

Western Cape Minister of Education Debbie Schäfer said on Sunday, “I remain concerned about any further disruptions to public transport as a result of taxi violence.”

She said those instigating the violence were preventing learners from attending school.” “They also need to access the school feeding programme.”

Western Cape Premier Alan Winde and national Minister of Transport Fikile Mbalula have requested additional SANDF support for the SAPS, which has already scaled up its presence in hotspots.

“As a result of these efforts, we have seen no further incidents of taxi-related violence, and Golden Arrow Bus Services are, as of this morning [Monday], operating 95% of its more than 1,000-strong fleet,” said Mitchell.

On Monday, CODETA spokesperson Andile Kanyi said the association is disappointed with Mitchell’s decision. “He [Mitchell] should have protected legal operators. Are legal operators going to suffer because of the illegal operators?” said Kanyi. “He has done what he has done there is nothing we can do. We will wait for the arbitration this week.”

Spokespersons for SANTACO and CATA have not answered GroundUp’s inquiries.

Next:  The Covid grant should be R585, so everyone can afford to eat

Previous:  Winters are the worst nightmare for us, says homeless man in Springs