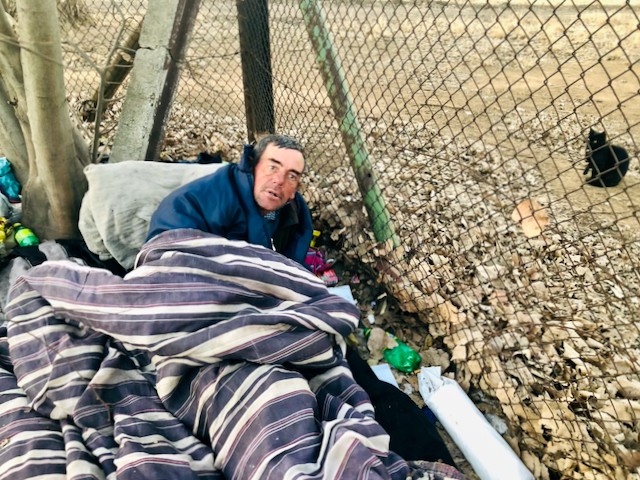 “My frozen feet are my worst enemy. Nothing l do is ever enough to warm up my feet,” says Hennie Dippenaar, who sleep out on Ermelo Road in Strubenvale, Springs. Photo: Kimberly Mutandiro

“I can’t remember when last I felt warm. It has been really cold of late and most of the time l lie awake at night staring at the sky,” says Hennie Dippenaar, who is homeless and sleeps under a tree on Ermelo Road, Strubenvale, in Springs, Gauteng.

“My frozen feet are my worst enemy. Nothing l do is ever enough to warm up my feet,” he says.

Temperatures fell to -7ºC last week in Springs. Shelters are full. Some days of the week there are no soup kitchens and people are left to brave the cold night on an empty stomach.

Dippenaar beds down at 5:45pm, early, before it gets too cold. He sleeps with all his clothes on, including his shoes. He makes do with two blankets, and his small, black cat which cuddles up with him.

“I’m glad if l can steal a few minutes of sleep,” he says.

Dippenaar says he lost his job in January due to the pandemic and could no longer pay his R400 rent. He did some gardening work at first but he hasn’t found any piecemeal jobs lately. He goes door to door asking for money, food or work. Sometimes he begs at the traffic lights. On Tuesdays and Thursdays he eats at a soup kitchen. 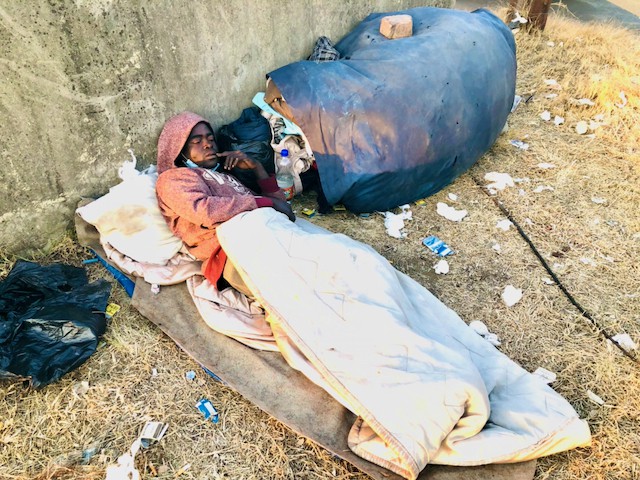 “Nothing can ever beat this cold winter. To think that l had a home of my own once,” says Fana Nxumalo.

Not far from Dippenaar, Fana Nxumalo, who has been living on the streets for two years, was also preparing for the night. “Under normal circumstances I would not go to bed this early, but this is the only way l can increase any chances of sleep,” he says.

He said his feet go numb from the cold at night and he often goes to bed hungry.

When he can, Nxumalo guards cars to get some money for food, but he often goes to bed hungry.

“Nothing can ever beat this cold winter. To think that l had a home of my own once,” he says, his voice trailing off.

Sometimes he and another man make a fire if they can find some wood. 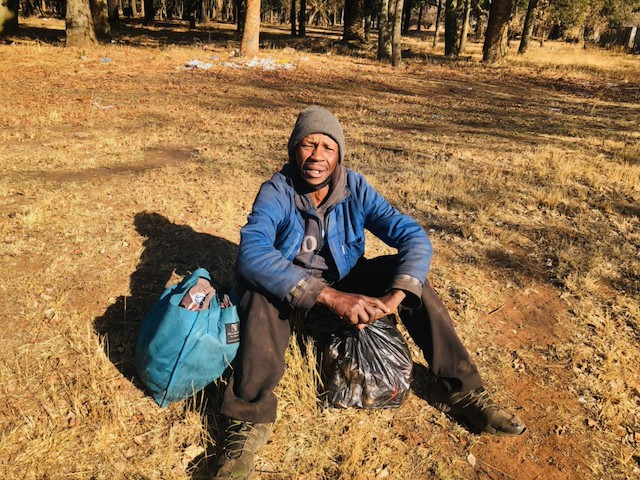 “Blankets are the most prized possession anyone can have while living here on the streets,” says Paulus Ezekiel Mlangeni.

“Blankets are the most prized possession anyone can have while living here on the streets. I hide mine in a bush far away where no one can steal them,” says Paulus Ezekiel Mlangeni, who sleeps in a park along Fourth Avenue, Geduld. He also sometimes sleeps out in Brakpan and Benoni.

He says has lost his blankets to thieves many times.

He and a homeless friend, Themba Dhlamini, fetch their blankets from their secret hiding place. They gather firewood at nightfall to cook and keep warm.

Dhlamini lost his shack in a fire five years ago in Never Never informal settlement. He is waiting for December 2022, when he turns 60 and can get a state pension.

“I always ask about the weather forecast so l can prepare for the night ahead. Winters are the worst nightmare for us. But one thing l have learnt during my 20 years on the street is patience. It won’t be long. Soon, one year will fly by and before I know it l will be able to afford a nice warm room with my pension money. I will even offer my friend, Themba, a spot until he can get back on his feet,” he says.

Both Dhlamini and Mlangeni were sleeping with other homeless people in a disused mortuary, but it burnt down one night at the start of winter.

“I buy soap from time to time to wash my clothes. But with this cold, I have forgotten about washing blankets, because l will suffer from the cold at night if they do not dry,” he says.

Next:  Return to school spoiled by Cape Town taxi war

Previous:  Covid-19: Unions should push harder for teachers to get vaccinated