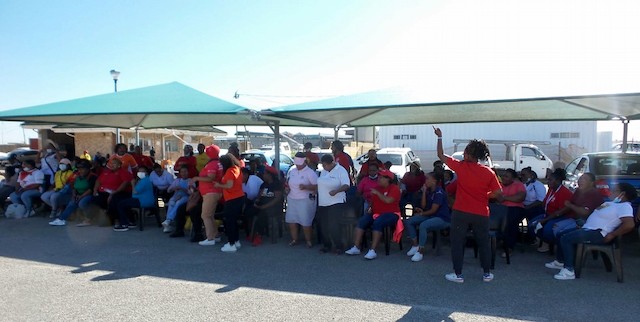 About 100 clinic workers gathered at the Motherwell Healthcare Centre on Thursday to present their grievances to their unions. The staff are seated under an awning where patients usually wait their turn. Photo: Joseph Chirume.

Health workers in Gqeberha have vowed to continue with the shutdown of clinics in Motherwell that started on Tuesday.

They want the national government to place the Eastern Cape health department under administration.

About 100 workers under the banner of Combined Labour, from several unions, gathered at the Motherwell Healthcare Centre on Thursday.

National Education Health and Allied Workers Union (NEHAWU) regional secretary Samkelo Msila said, “The current head of department has done nothing to turn around the department despite all the expectations when she was appointed last year.”

He said the clinics were better managed by the municipality before 2012 when they were taken over by the province.

He said while facilities in Nelson Mandela Bay Metro were closing despite population growth, hospitals and clinics were being built in the east of the province.

“We are facing shortages of staff and the non-replacement of staff here in the metro,” said Msila.

Workers say the maternity ward at the Motherwell Health Centre, the only one in the township, is understaffed, and clinics lacked pharmacists, drivers, managers, clerks, cleaners and groundsmen.

“The maternity unity has seven nurses instead of 16. There are no cleaners during weekends. There were supposed to be four shifts but at present there are only two due to shortage of staff. Instead of solving the problems in that ward, the department added three student nurses, thus giving nurses more burden to train these students instead of relieving them,” said shop steward Sister Winky Mngqibisa.

She said, “There is one qualified nurse in the psychiatric unit and an assistant. If she is on leave it means the ward is closed.” It is the only service covering Motherwell, Colchester and Addo, she said.

She said Wells Estate clinic did not have any cleaners.

Mngqibisa said the Motherwell Health Centre has 35 nurses instead of the required 59. “When a person resigns there is no replacement for that post,” she said.

Yoliswa Pali of the Nelson Mandela Bay Municipality said she had come to facilitate between residents, aggrieved workers and officials of the department of health. She held a closed meeting with union leaders and ward councillors.

Eastern Cape Department of Health spokesperson Sizwe Kupelo is yet to respond.

Previous:  Anguish of father of two sisters swept away by Msunduzi River