Kirkwood and Addo towns shut down by protesters 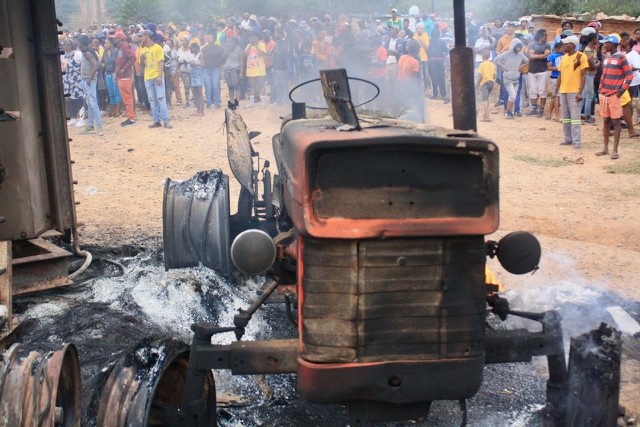 Protesting residents and farm workers shut down Kirkwood and Addo on Friday. Protesters woke up a worker and told him to drive a tractor to Aqua Park, where they torched it. Photos: Thamsanqa Mbovane

Kirkwood and Addo towns in the Eastern Cape were shut down by protesting farm workers and residents on Friday morning.

Protests started earlier in the week.

Hostels believed to house immigrant workers were torched and a tractor set alight.

Businesses were closed by over 2,000 protesters from Kirkwood’s townships and Nomathamsanqa and Valencia townships in Addo.

Only nurses were allowed to go to work. All other workers in the town centre were told to down tools.

Hundreds of farm workers are demanding R30 an hour. The national minimum wage is R23.19 per hour.

On Wednesday, protests by residents led by South African National Civic Organisation (SANCO) over electricity, water, and the need for a police station in Kirkwood saw Sundays River Valley Mayor Simphiwe Rune and SAPS Colonel Robbie Riekerk sign a petition. However, there had been no farm owner representatives present to accept the petition so protests resumed.

Ward 5 Councillor Zoyisile Qusheka (ANC) and ward 6 Councillor Nokuzola Maxana (ANC) said all key entries to Nomathamsanqa township were being monitored by protesters and all vehicles stopped from ferrying workers.

As the protests continued into the afternoon, a hostel on Habata, a fruit and vegetable farm in Bershiba believed to accommodate 20 immigrant farm workers, was torched. A tractor was also burnt near Aqua Park. Lemon trees were sawn down on Daps Farm and used to block the road leading to Moses Mabida township.

Zamuxolo Sali, a resident, said the torching of the tractor was in retaliation against a young farmer with his pit bull who had verbally insulted women farm workers.

Mbuyiseli Bayini, SANCO leader, denied that the protests were xenophobic. “The creation of xenophobia is done by farmers who employ more foreigners as drivers, managers, supervisors, while local people are jobless and are a majority. We demand 70% employment of locals and 30% of foreigners.”

Police spokesperson Sergeant Majola Nkohli said the situation was tense. “Reports indicate that two farms were torched but we cannot confirm any damages as no cases have been opened yet. Police are visible in the area to monitor the situation.”

Mayor Rune said farmers’ forum members had finally signed a petition from the protesters on Thursday afternoon. A meeting has been scheduled for Monday to negotiate wages and other grievances.

Theo Bezuidenhout, mediator and facilitator for the Monday meeting, said, “I know of two or three farmers whose property was seriously damaged … It seems like there was a huge misunderstanding because there were only two farmers or organisations implicated in the petition and they were never informed or invited [to sign a petition] during the protest.”

A seasonal worker who picks oranges on a Kirkwood farm told GroundUp: “Farm owners have informed us that no work, no pay policy will apply to all protesters. It is difficult to defy protesters’ orders to take part in the protest because we rent RDP houses in the same township they live. So we decided to rather take part in the protest to avoid being dealt with by them.”

“We will be hit hard by the protest,” he said. “We have to pay rent at month end, whilst we didn’t go to work.” 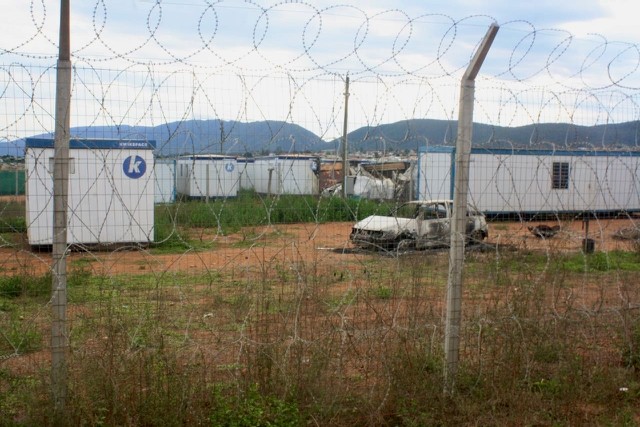 A vehicle was torched on Habata farm. The containers behind housed immigrant farm workers who appear to have been evacuated.

Next:  Nando’s gets the stick for firing a man who tasted its carrots