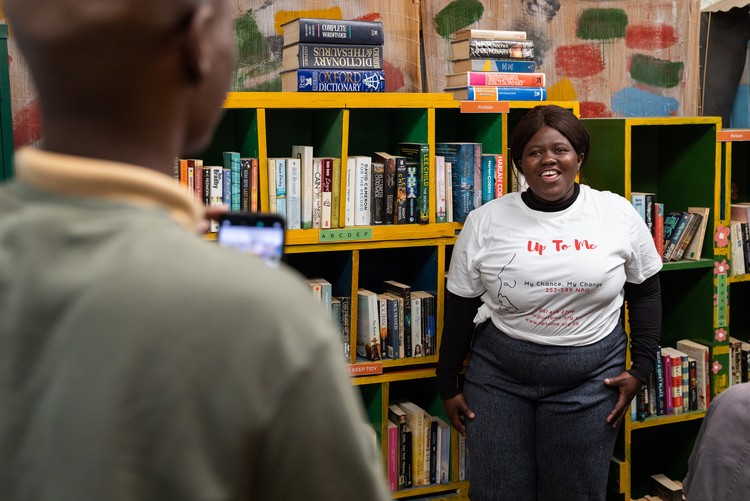 Twenty-two year old Anathi Lobi is one of the women in the Up To You entrepreneurship programme. Lobi says the Wolwerivier library is important because “We want to bring a brighter future to our kids”. Photos: Ashraf Hendricks

Wolwerivier familes gathered on Saturday morning for the opening of the very first library in the settlement outside Cape Town.

Wolwerevier is an “incremental development area” created by the City of Cape Town about 30km north of the city. Most people there were evicted from their previous homes. They live in tin houses. Until now the children have had to use the library in Dunoon, a R15 taxi ride away.

Named Masibambane or “Let’s work together”, the colourful 18m2 library has about 800 books. It is inside the Sunshine Educare crèche and community centre, and was sponsored by women’s empowerment programme Up To Me and supported by radiology students at the Cape Peninsula University of Technology.

Siphokazi Enhlisombi, a member of the board of Up To Me, says the project was prompted by the large number of young people and children in the area. “What was missing was a library. A place where they can escape to. Get books. Read and learn.”

In books, she says, readers can look into other lives and perhaps “find people they can relate to. Characters that can empower them.”

Up To Me runs an entrepreneurship programme with young women and 10% of the money made by the women was donated back to the library. “It’s a little room, but everything starts somewhere,” says Enhlisombi. 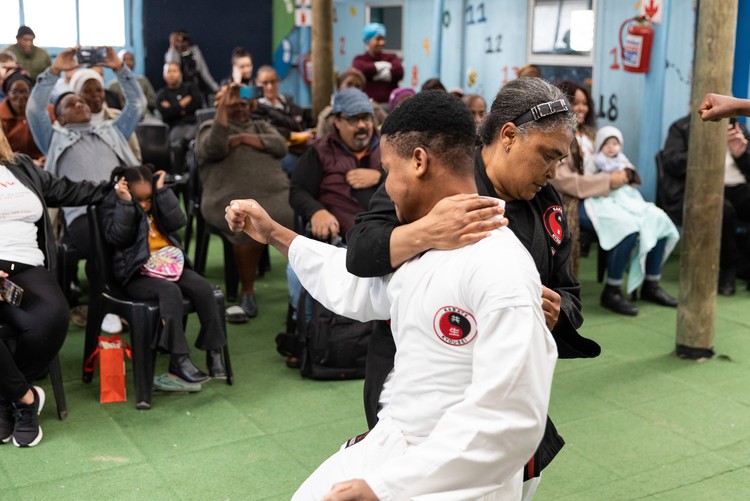 About 50 people attended the opening of the library, which was celebrated with a demonstration by the Karate Kyousei dojo, poetry readings, modelling and singing.

Lize Testa, financial executive from Up to Me, says they chose Wolwerivier because it is rural. “It seems like everyone has forgotten about them.”

Many of the children there have never had access to books, she says.

Nikki Pretorius is the founder of Sunshine Educare, a programme of Humanitarian Organisation for Poverty Eradication (HOPE) which she also founded. She says many problems in Wolwerivier, such as teenage pregnancy and alcohol and drug abuse, stem from boredom. “People in a community like this, in the middle of nowhere, have no escape,“ she says. The library is affordable, accessible and “something for the kids to do that’s not in a shebeen”.

“A library is one of my dreams for Wolwerivier,” says resident and community worker Magdalene Minnaar. She grew up with books and her two grandchildren aged two and nine will definitely make use of the library, she says.

People don’t always have data to access the internet, she says, and “it’s just nice to go sit down in a place where you can relax and actually feel a book”.

A challenge the library faces is that most of the books are in English whereas Wolwerivier is an Afrikaans and isiXhosa speaking community. Long-term goals for the library include more books and laptops for computer literacy training.

Next:  Fed up with poor service, hundreds march to Eskom office in Khayelitsha

Previous:  More than 20 families share one pit toilet in this East London settlement