Fed up with poor service, hundreds march to Eskom office in Khayelitsha

Residents want workers to return to the local office and for Eskom to fix high mast lights, transformers and faulty street lights in the community. 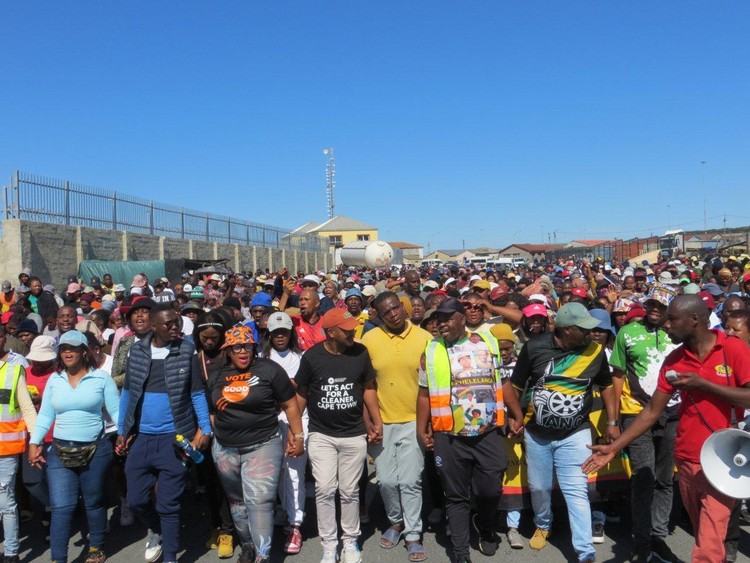 Hundreds of people marched to Eskom’s offices in Khayelitsha to demand that electricity issues in the community be resolved immediately.

The large crowd was led by members of the Khayelitsha Development Forum, SANCO and ward councillors representing GOOD and the ANC. The group said that because Eskom staff have not fully returned to their offices since the end of lockdown, residents are struggling to log complaints to get power issues resolved swiftly.

Ndithini Tyhido, chairperson of Khayelitsha Development Forum, explained why they want Eskom staff back in the office. “If you speak to a person, she or he will look you in the eye, see your desperation and sympathise with your plight,” he said. He also said many people have struggled to navigate Eskom’s customer care app which is called Alfred.

Resident Mvuyisi Zazini, who joined the protest, complained that he was turned away at the gates when he came to report electricity outages in his area about two months ago.

“A security guard ordered me to stand outside and report my problem to him. He then brought out a senior official who told me there was no one to attend to my problem as the staff worked from home.”

Zazini said Eskom should refund residents whose electrical appliances were damaged due to loadshedding. He said some residents have resorted to connecting illegally because their food was rotting because Eskom could not come out to fix electricity boxes in Kuyasa.

Julia Ntozini said they have been told to report issues in person at the offices in Bellville, which many residents can’t always afford to do. “We don’t work and taxi fares have shot up. We buy electricity from Eskom, but no official is available to deal with our complaints.”

Community leader Dudu Lembe said some residents borrow R150 from local loan sharks to pay electricians to do repairs because Eskom electricians don’t come. “By the time the government grant day comes, they are knee-deep in debt,” she said.

Ward councillor Ayanda Tetani said, “Residents crowd our offices to report problems with electricity. Eskom makes them wait from seven to 14 days. We have had enough,” he said.

Tetani said some fire victims have been waiting for years for Eskom to install new electricity boxes in their shacks.

The residents’ memorandum demands that Eskom deal with “unresolved cases and unattended reference numbers”. The memo also calls for the electrification of informal settlements “whether they are new, old or invaded.” They also want Eskom to fix high mast lights, transformers and faulty street lights.

Mbulelo Yedwa, Western Cape acting manager of Eskom, said illegal connections overburdened transformers in Khayelitsha. She said the power utility wants to start a project to encourage better working relationships with the community. “We want our staff to be safe, and we rely on you for our safety,” said Yedwa.

Eskom has seven days to respond to their demands.

Next:  Anger at civil society exclusion from Presidential summit