“GBV is a pandemic. Do something about it!”

Hundreds protest against violence against women at Parliament 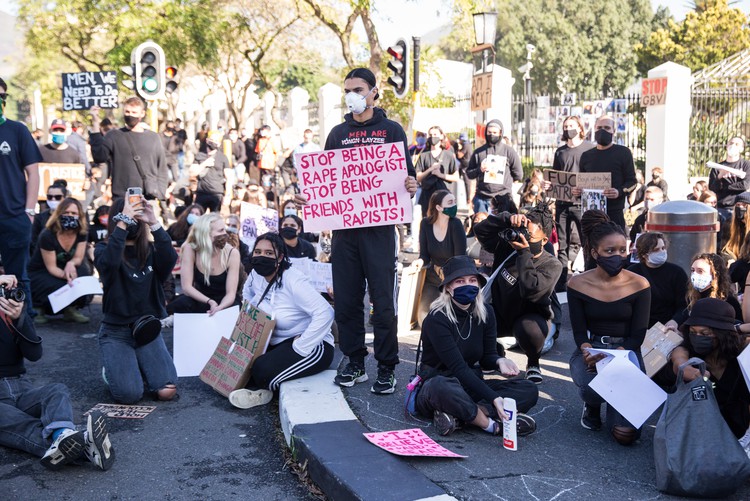 On Tuesday over 200 demonstrators stood outside Parliament calling for action to be taken against gender-based violence. Photos: Ashraf Hendricks

Susana Kennedy says that as a child she was abused by a family member. It went on for years. As a teenager, she says, she was raped. Then at 28, her best male friend, raped her.

Kennedy joined over 200 demonstrators on Tuesday outside Parliament, calling for action to be taken against gender-based violence (GBV).

Most of the protesters were women. They wore black, with masks. They held up placards, saying: ”GBV is a pandemic. Do something about it”, ”I don’t want to die with my hands or legs open” and “Make the sex offenders list public”. Some held pictures of victims.

With a megaphone in her hand, Kennedy asked the crowd, “When is our government going to actually step up and protect us?”

She said laws needed to change. “When we say we cannot continue being silent, everyone who doesn’t actually step forward and address the problem, male or female, is part of that problem.” 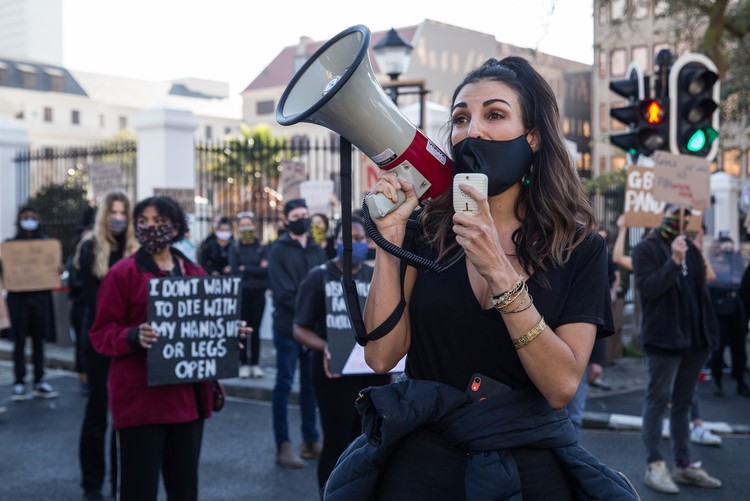 Susana Kennedy speaking at the protest.

“We live in a rape culture. We live in a culture that makes it acceptable for men to do whatever they want to do,” said Kennedy.

She said that she is unsure how to change that culture, but “it starts with us individually taking responsibility and speaking out”.

Protesters lays on the ground in silence for five minutes to acknowledge those affected by gender based violence.

“The first time I had sex I was drugged and unconcious. The doctor that examined me called me naive,” said a sign held Yolisa Zokufa.

“When I was 11, I was molested by someone very close to my family. Someone I trusted,” she said.

She said people should report abusive relationships. “By silencing ourselves we are protecting these men who will never do shit to protect us,” she said.

Zokufa said that getting a protection order felt empowering. “I am proud of myself” she said to a crowd cheering and clapping.

Ayesha Abou-Zeid, a Stellenbosch student and one of the organisers said that the protest was sparked by the President’s recent remarks on GBV.

In his address, President Ramaphosa said that he will be proposing to Cabinet that the sexual offences register be made public and that the minimum sentences for gender-based violence are harsher.

On 4 September 2019 thousands took to the streets protesting against gender-based violence in Cape Town and Makhanda. The protests were prompted by the rape and murder of a University of Cape Town student Uyinene Mrwetyana in the local post office. Police arrested 11 during the protest. The very next day Ramaphosa met with protesters.

Abou-Zeid said that that the president’s address angered her. “We can’t be silent anymore and we are going to fight until something gets done,” she said. She said that men need to hold their friends accountable. “When your friend makes a rape joke” or “If you are walking on the street and you see something that is not right you need to say something.”

Police requested that the protesters leave due to it being an illegal gathering under the disaster management act, but no one budged. Instead, protesters sat on the ground and said that they would not leave until someone from government collected their memorandum.

Some of the demands included updates on what has been done to combat GBV, frequent meetings with government, to make the sex offenders list public, and an inclusive and progressive sex education syllabus. A memorandum of demands was handed over to a Parliamentary official.