Thousands gathered outside Parliament for a second day of protest on Thursday, calling on president Cyril Ramaphosa to take action against violence against women. The protest was sparked by the rape and murder of first year University of Cape Town student Uyinene Mrwetyana at a post office in August and of University of the Western Cape student Jesse Hess in her flat earlier this month.

On Wednesday, students protested outside the CTICC calling for the president to address them. Eleven students were arrested for public violence according to SAPS.

“We feel anger and sadness, especially because this happened to one of our best friends just a few days ago,” said Tracey Hickman on Thursday. Hickman was friends with Hess and said that she never thought something like this could happen to one of her close friends. “Rape in South Africa is a cultural problem,” she said.

Francesca Lefebvre travelled from Johannesburg for the protest. She said that she became friends with Hess in Grade 10. She said the two of them had sometimes spoken about the fear of gender-based violence. “We feel so angry” said Lefebvre.

“I’m very angry because I’m not sure if I’m next,” said activist Lindiwe Dhlamini. She said that women had been harassed and catcalled on their way to the protest by men. “We are tired. We cannot breathe,” she said. 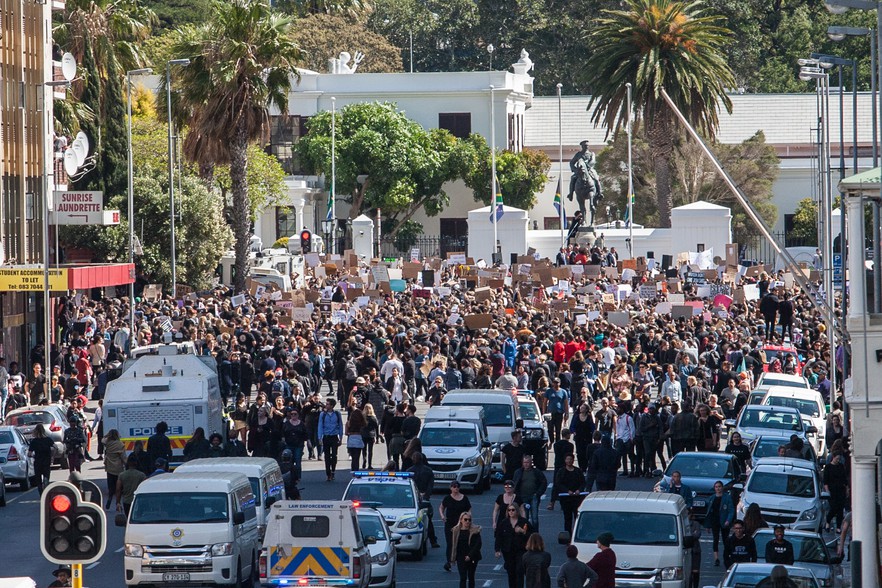 There was a large crowd at the protest outside Parliament. Photo: Ashraf Hendricks

President Cyril Ramaphosa addressed protesters outside Parliament. When he arrived, in defiance, people refused to sing the national anthem.

“I know what you’re all going through,” he said. He said he had received a memorandum and had seen the placards being held. “I agree with you. Indeed, enough is enough,” he said. He promised to address the nation soon on measures to curb gender-based violence including harsher penalties . “So that the men who violate women, who rape women and who kill women must stay in jail for life.” Ramaphosa said that those who killed and raped women should not get bail or parole. Crimes against women and children should be priority crimes, he said.

UWC student Mujeeb Stellenboom joined the protest because, “In the culture of South Africa, women suffer from the harsh brutality of men.” Stellenboom said that he thought the president’s speech was good as he recognised the problems that the country is facing. Stellenboom, who is religious, disagrees with the death penalty. “At the end of the day, you will pay for your sins. You will pay for the things you committed.”

As the day progressed, placards could be seen along the gates of Parliament, on the Louis Botha statue, on police vehicles and at the feet of police stationed outside Parliament.

Protesters again made their way to the Cape Town International Convention Centre where the World Economic Forum meeting is currently underway. Police put up a barricade with barbed wire preventing any protesters from getting close. 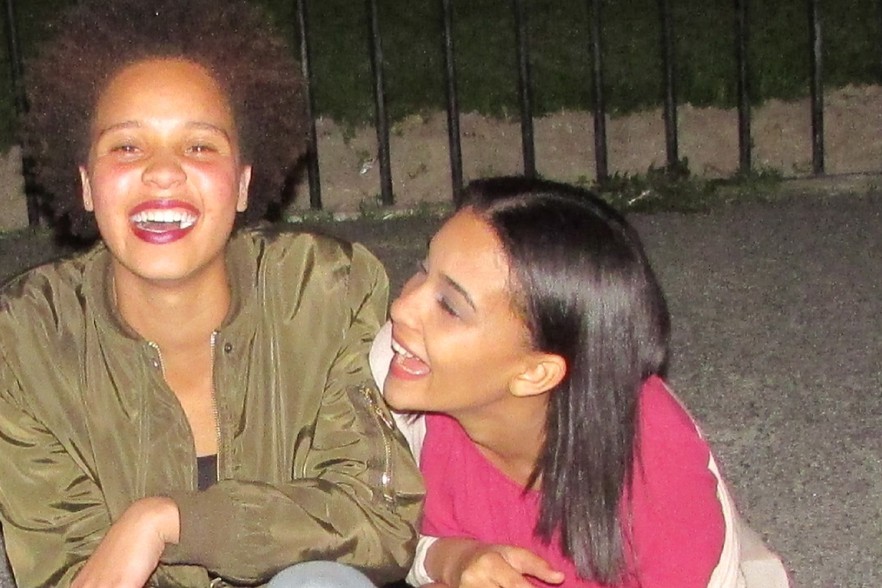 The 26 Vice-Chancellors of universities in the country have asked for a meeting with Ramaphosa to discuss gender-based violence. “We are experiencing an epidemic of incomprehensible violence. South Africa’s universities are reeling this week from the rape and murder of UCT student Uyinene Mrwetyana and the murder of UWC student Jesse Hess at a truly tragic moment in our country’s history, a moment that has moved South African society, across constituencies, to say enough is enough,” they said in a statement.

On Wednesday, Khayelitsha residents again marched to the torched house said to belong to the man arrested for Mrwetyana’s murder. The residents, mostly women, put a cross on the door frame before moving to the home of the accused’s parents.

Sanelise Badula said: “The placards and the cross we left there symbolises us. We are tired of being murdered every day. We also want the women of Khayelitsha to stand up against the abuse. Khayelitsha is a bad place because of our brothers who see us as doormats.”

When the residents arrived at the home of the accused’s parents, hoping to talk to his mother, they found that she had been admitted to hospital. There was no one inside the house to receive the crowd.

Police arrived to monitor the scene as the crowd was chanting in front of the house. 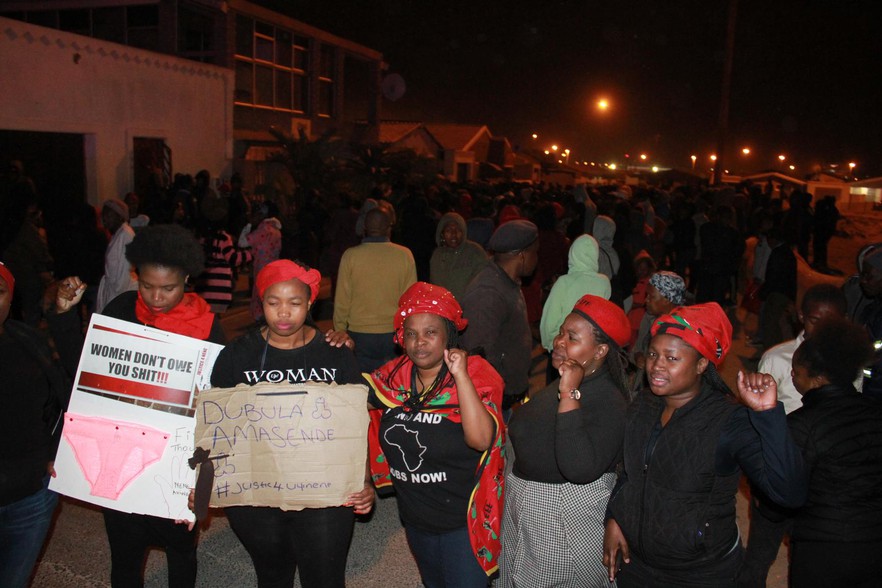 Khayelitsha residents marched for the second time to the home of the alleged killer of Uyinene Mrwetyana. Photo: Velani Ludidi

Meanwhile at the University of the Western Cape, protests continued for a third day as students mourned Hess.

Students wore black and had tape or red ‘X’s over their mouths as they marched from the Main Hall to the student residences. Many carried placards about Hess and Mrwetyana or called attention to rape culture and male violence.

Leaders of campus organisations emphasised that they were marching for all women who were victims of violence.

Thursday’s protest ended up at the Cassinga residence, just a few metres from the Kovacs residence where students said Bellville police had fired rubber bullets and teargas at a group of women attempting to remove a man accused of rape from his room. Police announced on Thursday afternoon that the man had not been arrested.

One student called for the shutdown of a recreational area of campus known as The Barn, where students say many people have experienced sexual assault.

Students had intended to deliver a memorandum written on Monday night to Vice Chancellor Tyrone Pretorius, but all academic activities had been shut down.

UWC announced Thursday that classes will resume on 16 September, after next week’s mid-term break.

Mrwetyana will be buried on Saturday at Abbotsford Christian Centre, East London.