Protests, dubbed #TheTotalShutdown, started at the Cape Town International Convention Centre where a World Economic Forum (WEF) meeting is taking place. One of the organisers, Carin Bester, said the protesters wanted president Cyril Ramaphosa, who was attending the meeting, to declare gender-based violence a state of emergency.

The protests were prompted by the rape and murder of University of Cape Town student Uyinene Mrwetyana in a post office earlier this month.

“We want the president to shift the focus to the gender-based violence happening in South Africa, not to the international and important people at WEF. The condolence messages that he is always sending after women are raped and murdered are not enough. We want action,” Bester said. 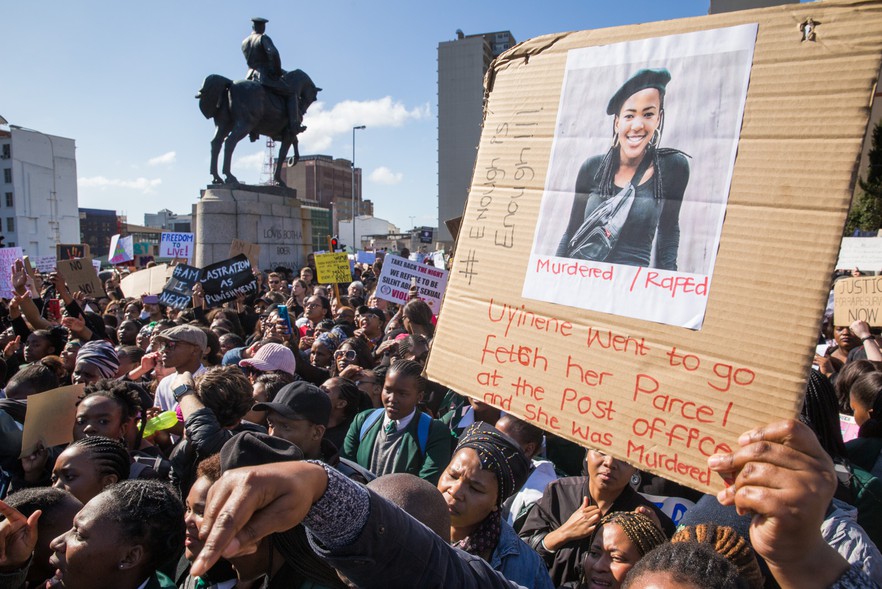 About 80 high school learners organised by Ilitha Labantu, based in Gugulethu, which focuses on violence against women and children, marched to the CTICC singing and chanting slogans. Some of their placards read: “Enough is enough” and “Stop killing us”.

Two girls aged 16 told GroundUp that they did not feel safe. “I am tired of living in fear. Tired of men touching me and my friends inappropriately. Government should bring back the death penalty for men found guilty of rape,” said a learner from Trafalgar High school.

The protesters moved to Parliament, joining a crowd of several thousand UCT students dressed in black, and other demonstrators. The students sang and carried posters reading “Where am I safe?”, “Stop raping and killing us”, and “Only when the last woman has fallen will they realise that men are the problem”.

Addressing the crowd, UCT vice-chancellor Mamokgethi Phakeng said: “Each one of us carries pain because each one of us has experienced some form of violence. Our streets are unsafe. Even public places like the post office are dangerous for us. To all the men we are saying: stand with us and say enough is enough.”

Architecture student Chinenye Chukwuka from Nigeria said she felt targeted everywhere she went. “What I am is a threat to this country apparently. I spent most of my life here but to this day if I say I am Nigerian I am hated. If I say I am a woman I am hated. I don’t understand it and nothing is being done about this.” 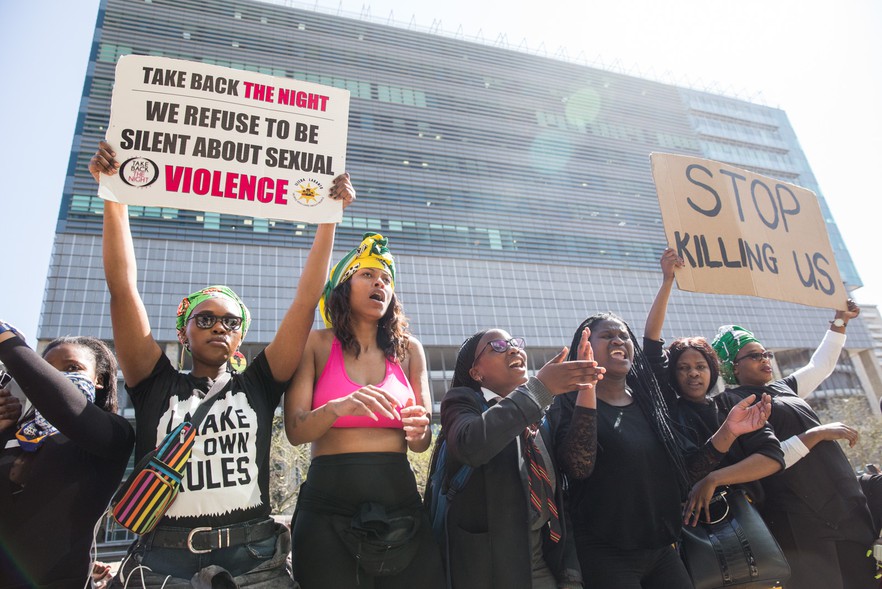 Protests moved back and forth between Parliament, CTICC and the highway. Photo: Ashraf Hendricks

From Parliament protesters moved back to the CTICC, demanding to see the president. Police with riot shields pushed them back from the steel barricades which were tied with plastic ties. A learner was pepper-sprayed.

The protest then moved to the highway, followed by police who used vans to block the crowd and stun grenades to disperse them. The protesters regrouped, sitting down in the street singing and holding up afternoon traffic. After a warning, police used a water cannon and stun grenades on the crowd. One person was arrested.

The protesters moved back to the CTICC and then back to the highway, sitting down again and blocking traffic. Police officers used blue water cannons to disperse them and made more arrests.

By then part of the crowd had moved back to UCT where they joined the memorial service for Mrwetyana, which was also attended by Mrwetyana’s family, outgoing UCT chancellor Graca Machel, Deputy Minister of Higher Education and Training Buti Manamela, and incoming UCT chancellor Dr Precious Motsepe.

Mrwetyana was described by her friends Jenna Smith and Anathi Nxutyaza as a person who loved laughing and making others laugh, someone who was focused and who was always there when needed.

Family spokesperson Nombulelo Koka, Mrwetyana’s aunt, read a message from the family expressing gratitude for the support from UCT and the country. “We celebrate the beauty and smile and love she showed to you and us and her love of God. She was the apple of our eye.” 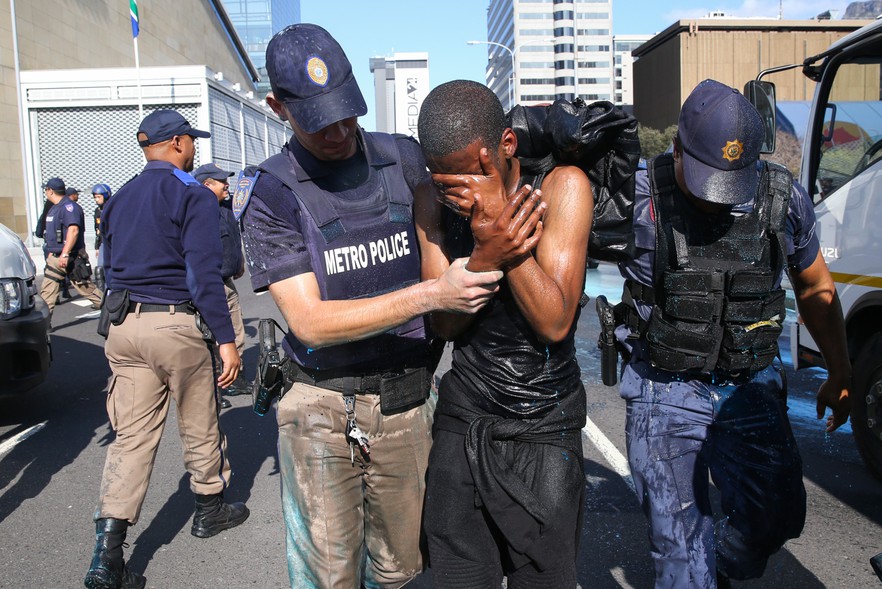 Meanwhile at Rhodes University in Makhanda (formerly Grahamstown), one of several campuses around the country where protests took place, hundreds of students gathered at the administration building to protest.

The mother of Uyinene, Nomangwane Mrwetyana, is the director of Student Affairs at Rhodes, and helped many students during the #RUreferencelist and #Feesmustfall protests.

The demonstrators marched up to upper campus, singing songs and holding placards.

One of the leaders, Irene Moloto, said students were “trying to create awareness of rape culture, patriarchy and silencing of victims”. Many students expressed frustration at the way the university dealt with gender-based violence.

At a vigil for Uyinene on Tuesday night on the Drostdy Lawns, Vice-Chancellor Dr Sizwe Mabizela said the “university community is reeling in pain and disbelief”.

At the University of the Western Cape on Tuesday night, students said, police fired stun grenades and rubber bullets at students trying to confront a student accused of raping a student in one of the university’s residences earlier this year.

Students Representative Council secretary general Bongani Mbelekana said the student accused of rape had been escorted away by campus protection services and police. Students had held a meeting which he said was dispersed by police with rubber bullets and teargas.

The university’s Gasant Abarder said students had tried to confront the student accused of sexual violence. “Police arrived on the scene and took action in an attempt to disperse the crowd. The students, accused of these crimes, were removed from the premises.”

“The university also understands that there are reports of shots being fired by police officers. We request that these allegations should be verified by the SAPS.”

He said the university was aware of the heightened anger in the wake of the murders of young students, “including our own Jesse Hess, and other acts of violence against women. We are angry too – enough is enough. To bring perpetrators to book requires a concerted effort by all. We urge students who have information about any crime, including rape, to report it to the campus security and the SAPS so that the relevant authorities can investigate.”

UWC student Jesse Hess and her grandfather were found murdered in their flat earlier this month.

No injuries were reported, he said. 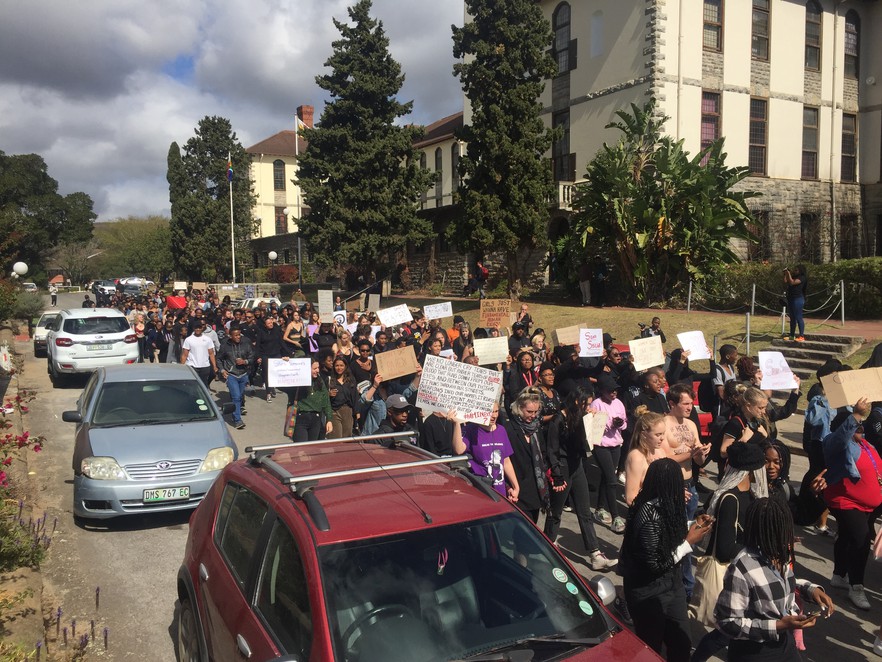 Next:  Transgender activists parade in Uitenhage