Several protests were held across the city on Thursday morning

Leaders of the Gatvol Capetonian group gathered on the steps of the Civic Centre in Cape Town on Thursday afternoon. At the time of publication, the group were attempting to enter the building through a side door to deliver a memorandum to the mayor. Police stood guard at the front steps.

Hours earlier, backyard dwellers in several communities, including Kensington, Parkwood, Delft, and as far afield as Mamre, blockaded roads in their respective areas over the lack of housing opportunities. City officials also provided regular updates throughout the day on the road closures after heavy traffic backlogs were reported in certain areas.

The protests – most starting after 5:30am – were led by members of the Gatvol Capetonian group who are known for their controversial statements about the “oppression of coloured people in Cape Town”.

In Parkwood, about 30 people gathered on Prince George Drive at about 6am. By 9am, the group grew to about 150 people, most of whom were children. Protesters burnt tyres and rubble to block traffic from entering the areas. Traffic officials and police were called to the M5 highway forcing officers to redirect traffic.

“This [protest] is the last resort,” said Magadien Paulse from Parkwood. He said he has been on the housing waiting list since 1994. Paulse shares a home with seven others. “There is no space to move,” he said.

“We need adequate housing for our community,” said Oscar Samuels, a resident of Parkwood and Gatvol Capetonian member. He said that in overcrowded communities like Parkwood and Lavender Hill “youngsters were killing one anothe”.

South African Human Rights Commissioner Chris Nissen, who was there to observe, had to intervene when someone had a scuffle with officers who were helping motorists pass. The group dispersed by noon.

In May 2018, then Minister of Human Settlements Bonginkosi Madikizela visited Parkwood during a land occupation. He told residents that a “lasting solution” would be found. But Parkwood erupted into chaos after shacks were demolished. Over a year later, residents say that they are sceptical of the promises that were made.

In Kensington, about 60 people gathered from 5:30am, blocking Voortrekker Road at 18th Avenue, while another group stood with placards at 5th Avenue. At about 7am, police fired rubber bullets and teargas at protesters who were stopping cars and trucks from passing. The group then moved their protest onto the pavement.

Backyarder Sadia Abdulaziz said: “I rent a wendy house for R600 [per month] while the squatters are getting free electricity, and other basic needs. I earn R1,200.” She lives with her three children and three grandchildren. She has been on the city’s database since 1998 she said.

“I have breast cancer and the cancer has spread to my spine, ribs and pelvis. All I am asking for is for a house so that I can die in dignity,” she said. 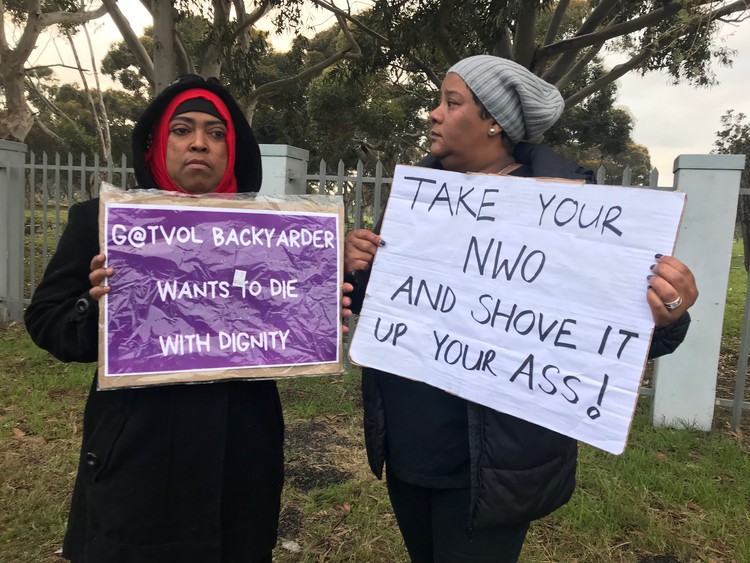 Next:  Sex workers speak of rape, corruption and harassment by police