“So what do we do now? Do we take down the structures that are already up? If we do, where will we go?” asks land occupier

The Western Cape Department of Human Settlements Minister Bonginkosi Madikizela assured Parkwood residents on Tuesday that a “lasting solution” would be found to end the problem of housing in the area.

Backyard dwellers started occupying land in the area on Friday. Clashes with police started on Sunday after City of Cape Town law enforcement removed people from the land. The situation calmed down on Tuesday as people waited for the minister.

“It has become clear to me that the people of Parkwood have genuine concerns,” Madikizela told the crowd that gathered at Walmer Street. “I came here today because I saw the seriousness of this situation. We cannot allow our people to live like this.”

But Madikizela also told residents that he could not allow people to occupy the land. “Opportunists will come from other areas and join,” he said.

He said he had heard from the Parkwood backyarders’ leadership that people wanted to be accommodated on land in the area. He said he would raise this request with the City when he met officials on Thursday. He said he would need the names of people waiting for homes.

“I am not here to tell you what you want to hear … I need to be honest with you. As government, we will not be able to provide houses for all of you at the same time. We will never have enough money to do that.

“The reason we want the list is so we can start with the elderly who have been waiting for years for a house. Then we will go down the list to the youngest people … As much as I don’t condone lawlessness, I understand where people are coming from,” said Madikizela.

Madikizela received sounds of approval and applause from the crowd, but after the minister’s address, some residents told GroundUp he had not said anything helpful regarding their current predicament.

“So what do we do now? Do we take down the structures that are already up? If we do, where will we go? My son is squatting here because we have no space at home. My lounge doubles up as a bedroom. There are seven of us living there in that tiny space. I have been living there for more than 15 years and I am on a waiting list since I don’t know when. It’s not fair living like this,” said Jennifer Parsons.

Some people continued putting up structures after Madikizela left the area. Abubakar Jacobs was with three of his sons – aged eight, five and three. “We are backyarders in one room. We have no toilet; we use a bucket. I live with my wife and our sons. We are both unemployed. We can’t even afford to pay rent,” he said. “I give the landlord what I can, sometimes R100, sometimes R50. We use the children’s grant money to get by. I am worried about my children’s future. I don’t want them to end up like me, going around asking for food from people. I want a better life for them. We need a house and I need a job.” 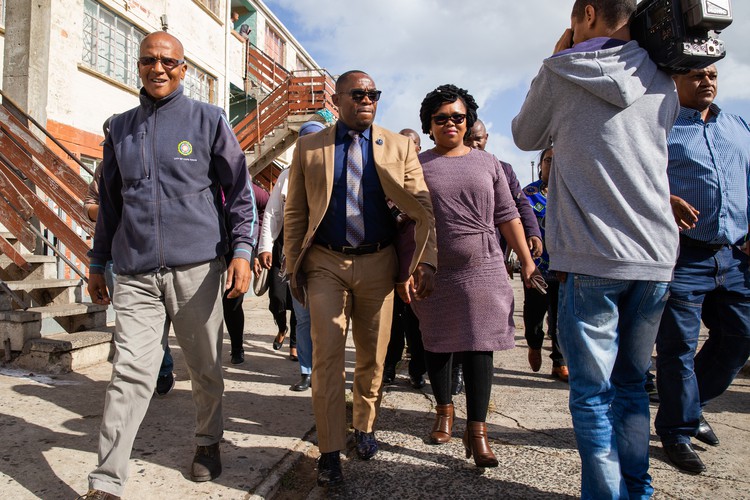 Next:  “We had no thermometer in the whole clinic”