“We will celebrate Christmas in sewage again”

Philippi families have been struggling with overflowing drains for a year 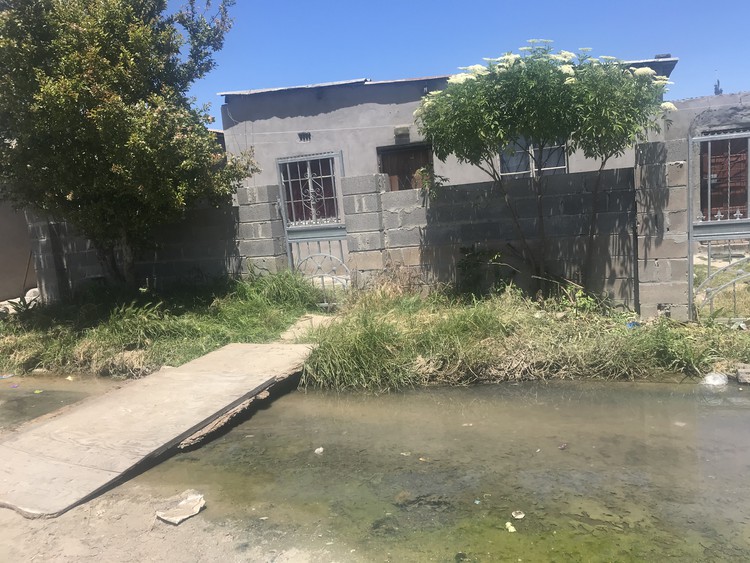 A Philippi resident in Cape Town has resorted to building a bridge and makeshift pathway over the murky and foul smelling puddles of sewage. Photo: Tariro Washinyira

The misuse of the sewer system coupled with rampant cable theft and vandalism at the Philippi West Pump Station has left the surrounding communities with ongoing blockages and overflowing sewage since 2019.

This is according to the City of Cape Town’s Water and Waste Department. The City was responding to complaints by residents of Victoria Mxenge and Browns Farm who say they have been pleading with the City to find a permanent solution to their blocked drains and overflowing sewage.

In July GroundUp reported that Browns Farm homes were flooded with sewage. Philippi residents protested outside the Fezeka subcouncil offices in Gugulethu on 6 August, complaining that their streets had been flowing with sewage since December 2019. Some people have even resorted to building a bridge and makeshift pathways to their home over the murky and foul-smelling puddles.

Community leader Patricia Matolongwe said the problem was “getting out of hand”. She said she had contacted the City and ward councillor several times but did not get help.

“This made it hard for the community to adhere to Covid-19 lockdown level 5 regulations in March because of the strong stench and flies coming from the sewage. We are worried about cholera and Coronavirus. The City doesn’t see us as human beings… We are not Constantia residents. We will celebrate Christmas in sewage again,” she said.

Crèche teacher Patricia Banda said she normally cared for about 90 children but because of the sewage problem, she now only has seven children. “The parents said they can’t bring their children to a health hazard and dangerous place. We have closed the main entrance to the crèche and the play centre because sewage created a big hole.”

Behind a house in Sankie street, green sludge containing food particles and human waste flows like a river. Homeowner Nokangelani Roji said the place has been flooded since November last year. “It is worse at my neighbour’s house who is suffering from a stroke. My grandchildren can’t play outside anymore. We have lost appetite for food because the smell we wake up to every morning is terrible. The City came once in August to assess and they never returned.”

Xanthea Limberg, Mayco Member for Water and Waste, said on Thursday that the City’s Electricity Department is trying to find solutions to help prevent vandalism.

“These problems are being caused by misuse/abuse of the sewer system as well as cable theft/vandalism at the Philippi West Pump Station. Blocking of sewers is the biggest problem, but cables powering this pump station are also often stolen,” she said.

Limberg said in the interim the City would use mobile pumps during the day to power the pump station and minimise overflows. She said the pumps could not run at night because of security concerns.

“Only human waste or toilet paper must be flushed down the toilet and manholes should not be used for dumping,” she said.

Previous:  What this municipality hadn’t done in years, Gift of the Givers did in just three days

Wallacedene will suffer the same fate

The same situation can be found along Botfontein road, on the sidewalk, next to Wallacedene, next to an established legal neighbourhood... Foul sewer water has been damming in that area for the last 2 months and, even though I reported this situation to Mr Twigg on the 12th of September, nothing has been done about it.

Not only are we having to deal with Covid, but also the diseases emanating from this foul water!