Toilets overflow for a month as City drains clog up

City blames blockages on “misuse of the sewer system” 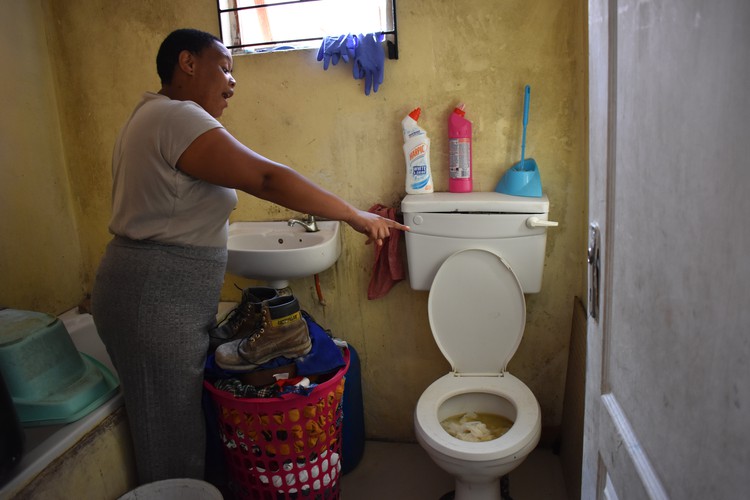 Sithenkosi Mhlophe from Browns Farm in Philippi, Cape Town, showing her blocked toilet. She says they have been waiting for the City of Cape Town to come and fix the problem for a month. Photo: Buziwe Nocuze

Four residents from Browns Farm in Philippi have been living with sewage overflowing in their homes for a month.

GroundUp sent a query to the media office on 19 July. The City of Cape Town’s Water and Sanitation team unblocked the main sewer line in Link Road on Tuesday 21 July, which connects to the sewer line in Mpolweni Street. Despite this effort, the toilets were blocked again when we contacted residents at midday on 29 July.

Their toilets are blocked because of the sewer in the main road. They hired a plumber but he could not fix the blocked toilets. “We have been waiting for the City of Cape Town for a month now. If they continue to ignore us, this will kill us before Coronavirus,” said resident Primrose Liwani.

Liwani claims that she has been in contact with the ward councillor who promised that City trucks would fix the sewage problem but to no avail. “We tried fixing it but if the problem is at the main drain then there’s nothing we can do, it is only the City that can assist us,” she said.

Ward 80 Councillor Nkululeko Mgolombane said he has tried everything to assist the families. “My job is to contact the City as soon as they alert me about the problem, which I did, but the City has been failing big time. I don’t blame the residents for thinking that I am the one who let them down.”

Mgolombane said he again called the City’s Depo truck in Mitchell’s Plain and they told him they were on their way. “I drove there to fetch them but I was told that they are short of drivers,” he said.

Sithenkosi Mhlophe said when the toilet is full, they are forced to use a bucket to empty their toilet. “We are not asking much from the City but for their trucks to come and fix this mess,” said Mhlophe.

Mayco Member for Water and Waste Councillor Alderman Xanthea Limberg blamed the blockages on the “misuse of the sewer system” by people who discard newspapers, feminine hygiene products, and cooking fat/oil into the sewer system.

“When these are poured or flushed down the sink and drain they harden and build upon the inside of the sewer pipes and act like glue, attracting rags and other debries. These blockages make them very difficult to clean out,” said Limberg.

Correction: This story was updated on 29 July 2020. The previous version did not include that the City had sent a team to unlock the main sewer line on 21 July 2020.

Next:  Family of 13 living in a shack have “tried everything” but “there are just no jobs”

ANC has done nothing for us since 1994, says hostel resident