Protesters call for CCMA budget cuts to be reversed 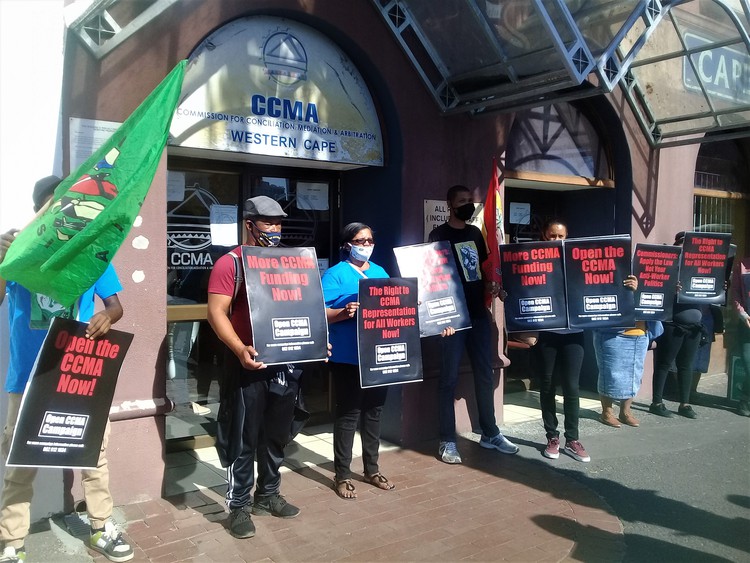 Members of the Open CCMA Campaign picketed outside the Commission for Conciliation, Mediation and Arbitration (CCMA) offices in Cape Town on Wednesday. They are demanding that the CCMA employ more full-time commissioners and for recent budget cuts to be reversed. Photo: Marecia Damons

Over a dozen members of the Open CCMA Campaign picketed outside the Commission for Conciliation, Mediation and Arbitration (CCMA) offices in Cape Town on Wednesday, demanding that its budget cuts be reversed.

Simultaneous protests apparently also took place outside CCMA offices in other parts of the country.

During a virtual address on 30 March, the CCMA’s National Senior Commissioner for dispute resolution Marius Kotze, noted that although R90.1 million had already been deducted from its 2020/21 budget, “the projected cuts over a three-year period had been reduced from over R600 million to R301 million”. Part-time commissioners were also said to start hearing cases again from 1 April.

“None of these changes address our core demand for an immediate reversal of the budget cut,” Open CCMA Campaign said in a statement.

The campaign’s statement demanded an increase to the CCMA budget; the full-reopening of the CCMA’s walk-in facilities; permanent employment of all part-time commissioners and for a total transformation of the culture and practices of the institution which the campaign accuses of being anti-worker.

Nolubabalo Gcwaba, who was outside the CCMA, said she took a taxi from Khayelitsha at 9am to open a labour dispute case against her employer. She was referred to a nearby internet cafe to lodge her complaint.

“I’m tired. It’s difficult because I already didn’t really have money to come here. I spent R52 on taxis to get here, and now I must spend R52 again to go home. I don’t know if I can afford to even come back again,” she said.

Miena Andrew from the Matzikama Farmworkers Forum said due to financial constraints, several farm workers struggle to get help through the CCMA when they are unfairly dismissed. “Many of our farmworkers don’t have access to the internet or the money to get to an internet cafe. So how do they expect them to attend their hearings or open cases if they’re supposed to use the internet?” asked Andrew.

In response to the suspension of walk-ins, national spokesperson for the Open CCMA Campaign Songezo Mazizi said that during the hard lockdown, many workers lost their jobs and when they came to the CCMA to help with their disputes, the office was closed.

Next:  Children play in sewage in Gqeberha

Previous:  UCT fire: students tell how they grabbed textbooks and laptops and fled