Children play in sewage in Gqeberha 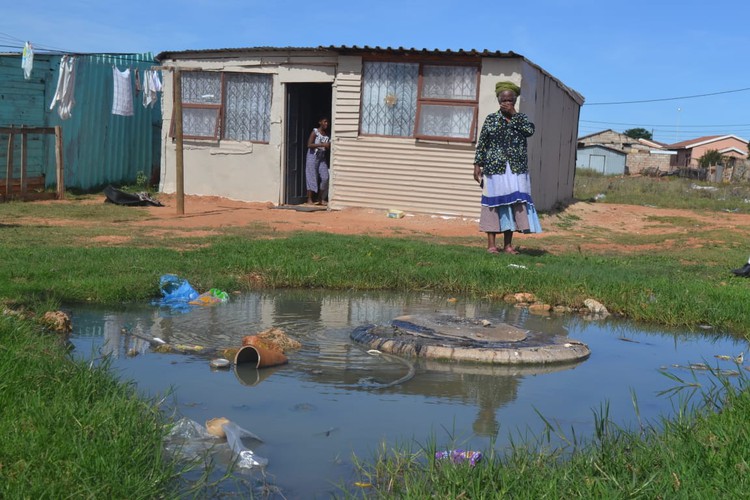 Motherwell resident Nomvuyo Ncapayi outside her home where sewage has been overflowing from a manhole for two weeks. Photo: Joseph Chirume

Residents of Sizinzi Street in Motherwell’s NU30, Gqeberha say their countless attempts to stop sewage from overflowing have been in vain.

They complained that children in the area were found playing in the murky puddles because they don’t have playgrounds.

The overflowing manhole is right outside Nomvuyo Ncapayi’s home. She said her yard is drenched in human excrement. “The problem is intermittent. This is why l am demanding a permanent solution. It is not healthy to live with sludge on my doorsteps,” she said.

Ncapayi lives with her daughter and four grandchildren. She said the informal settlement was only formed three years ago.

“What will happen after formal houses have been built and when there are many people living in the houses? This is why I am demanding a permanent solution now,” she said.

She said the most recent sewer burst started two weeks ago. While municipal workers had come out to check on the problem, they left without fixing it or saying a word to residents, said Ncapayi.

Sibongile Pakkies said, “My children can’t go out to play because of the situation. There are swarms of mosquitoes. What makes it more dangerous is that after they fix it, they don’t sprinkle chemicals and detergents to kill diseases before children return to play in the street.”

Mayco Member for Infrastructure and Engineering Councillor Masixole Zinto (DA) had promised to send a team to fix the problem.

On Tuesday afternoon, the manhole was still overflowing. Ncapayi said a truck with City workers had been there but no work was done.

Next:  The skull of the outlaw hero Koos Sas finally laid to rest

Previous:  Protesters call for CCMA budget cuts to be reversed