Why families occupied land in Parkwood

Dominique Booysen and his family have been living in the backyards of different council tenants in Parkwood, Cape Town for almost 20 years.

“People are tired of waiting. We want land and housing, not for politicians to come and make promises they can’t keep,” said Booysen. He is the chairperson of the Parkwood backyarders’ association.

Since May, hundreds of backyarders in Parkwood have been protesting intermittently for housing. They are demanding that the City of Cape Town hand over vacant land in Parkwood. The group began occupying land in the area on 18 May. Clashes with heavily armed police broke out after the City’s law enforcement removed people from the land.

“There are more backyarders than tenants living in Parkwood now,” said Booysen. According to ward 66 councillor William Akim there are approximately 900 backyarders living on the properties of council rental flats in the area.

“The conditions some backyarders are living in are very bad. Tenants overcharge, unplug the electricity and refuse water supply to the backyarders,” Booysen said.

He said he started the association after hearing numerous complaints by fellow backyarders who had “nowhere to go” for help. In addition to paying rent for often overcrowded spaces, Booysen said, backyarders were also charged high monthly fees by tenants for electricity and water.

Booysen said a while ago he successfully petitioned the City to install separate water and electricity meters for some backyarders. “I paid R100 every second day for electricity. Now that I have my own box, R50 lasts us a week,” he said.

Booysen said at a meeting in April angry residents questioned the validity of the City’s housing waiting list. “I asked [councillor] Akim to get someone from the housing department to come and explain to people how the list works. People were angry that some on the waiting list for two or three years get a house, while people on the list for ten or 20 years are still waiting,” he said.

A few days after the meeting, the group began erecting homes.

“We chose the open field [by Prince George Drive] because that’s where the public will see what’s going on and how our people are struggling,” said Booysen. The last housing project was built nearly 20 years ago, he said.

Asked about the torching of two municipal buildings and the looting of shops during the protests, Booysen said, “Sometimes as leaders you don’t have control over when people go protest. Like when some criminals burnt the civic centre and rent office. We don’t support that behaviour. But the City doesn’t see it that way.” 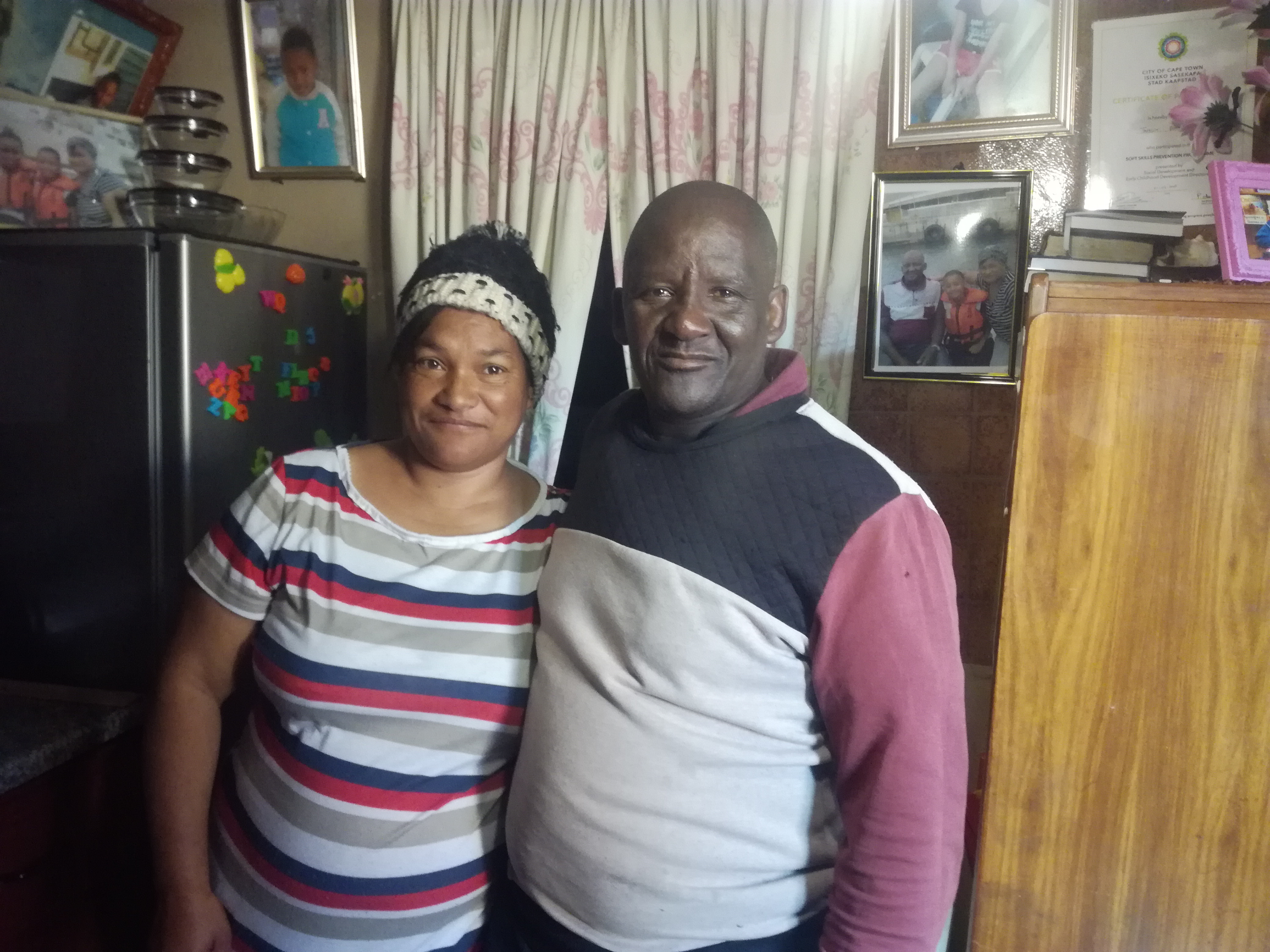 Dominique Booysen and his wife Shirene have been backyarders in Parkwood for 20 years. Photo: Barbara Maregele

Long-time backyarders get a house as protests begin

Parkwood resident and long-time backyarder Rashied Salaam told GroundUp that while his neighbours were heading to the streets to protest, his family was settling into their first home. “It’s an old house but for the first time my children have a yard,” he said.

“Being a backyarder isn’t easy, especially when you have children. We’ve lived backyard-to-backyard for nearly 20 years. I was just so relieved to get our own place,” he said.

At the end of May, Salaam moved into a two-room council flat with his wife and their three young children aged 17, 13 and ten. Salaam said he made regular trips the Civic Centre to ask whether any homes had become available. Each time, he was told “there’s nothing, try again next month”. Until three weeks ago when his wife called him at work.

“I said ‘you’re making a joke’. I immediately asked to leave work early and rushed to the rent office. They showed us the house. I kept asking if it was real. In the same week we moved in, the protesting started,” he said.

Salaam said moving into their new home meant they “inherited” the backyarders who were renting from the previous tenants. “There are two families living in the backyard and we don’t really know them. They were upset because they thought one of them would get the flat but then we moved in. One said they were on the waiting list for 15 years,” he said.

Ward councillor Akim said it was unclear how many people in the area were on the waiting list for housing. He said it was the responsibility of government, both local and national, to identify land in the area for development.

Asked about the allegations by some residents that he ignored requests by backyarders, Akim said, “I have an open door to listen to issues by residents in my ward. They can come to my office in Ottery or my house in Parkwood.”

Akim said renovation projects in the area included new ceilings in 112 triple-storey council flats. He added that the City was still in the process of electrifying and installing full flush toilets for some backyard dwellings.

Councillor Eddie Andrews, Mayoral Committee Member for Area South, admitted that no new developments had been built in the area, but said “qualifying residents” were benefiting from housing opportunities.

“Beneficiaries of all City housing projects are allocated in accordance with the City’s Allocation Policy and the housing database. The Breaking New Ground housing projects have an approved allocation split that includes beneficiaries who have been on the housing database the longest, based on the agreed application cut-off date; special needs applicants, and those from the targeted areas,” he said.

To register with the City’s database, Andrews said applicants must be:

“Housing allocations are done according to the application dates and when housing opportunities become available. Applicants are encouraged to contact the City to check the status of their applications and to update their contact details,” said Andrews.