Who is responsible for government’s failure to deliver? 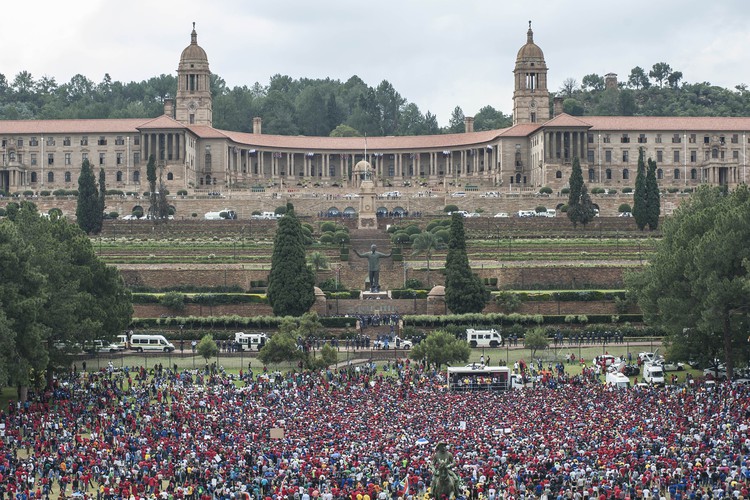 Perhaps it is time for the President to step in and read the riot act. If the departments of Social Development and Education and the Unemployment Insurance Fund cannot step up to the plate, the President should appoint new ministers and a new commissioner who can do the job, writes Jeremy Seekings. Archive photo of the Union Buildings: Ihsaan Haffejee

Under the lockdown it has been difficult to get information on what the national government has been doing. There has been a severe lack of transparency. The spokespeople for the national Department of Social Development and the South African Social Security Agency (SASSA) appear to have been locked down even more than the rest of us.

One of the few sources of information on government delivery are the presentations made by ministers and officials to virtual meetings of the parliamentary portfolio committees. Most MPs are as supine as ever. Nonetheless, some data rise out of the quagmire.

On 25 June, almost exactly three months into the lockdown, the Department of Social Development and SASSA reported to the Parliamentary Portfolio Committee on Social Development. The meeting focused primarily on the unedifying delivery of food parcels.

As I have previously written, much less food has been distributed to poor people under the lockdown than in the preceding months, largely because of the absurd suspension of the national school feeding scheme by the Department of Basic Education (DBE). Civil society (with some assistance from some provincial and local governments) have tried to fill the gap, but they simply do not have the resources of national government.

Challenged in court by Equal Education, the DBE has conceded that the national school feeding scheme must be resumed urgently. The DBE claims that it has, in fact, resumed the feeding scheme, although the evidence suggests to the contrary: On the ground there is chaos.

In its court papers, the DBE passes the buck for feeding schemes to the Department of Social Development (DSD). If schools were closed, the DSD became responsible. And, the DBE adds, the DSD had extra budget. The DSD is keeping quiet. In its presentation last week, it said nothing about its failure to feed children when school feeding schemes were suspended.

The presentations last Thursday also covered the roll-out of the special Covid-19 Social Relief of Distress grant announced by President Ramaphosa in April. Back then the plan was to roll out grants to eight million people for six months, targeting people whose informal livelihoods had collapsed or who were already unemployed without access to any existing social grant or other income.

A team based in the Presidency designed a plan that would enable grants to be rolled out smoothly and quickly.

The latest data (as of 22 June) show that SASSA received more than seven million non-duplicated and complete applications. Of these, a total of 3.2 million applications had been approved, meaning that they had been checked against other databases (social grants, UIF, NSFAS, PAYE) to ensure that applicants had no other easily demonstrable income.

SASSA told the committee that close to two million applicants had been paid. The largest shares went to KwaZulu-Natal and Gauteng. The smallest shares went to the Western Cape, Free State and (especially) Northern Cape. Six out of ten grants were paid to men.

When SASSA said that two million people had been paid, it seems that what it meant was that payments had been submitted to the banks and PostBank. A further 300,000 would be paid through ‘cash send’, i.e. mobile phones, at some future time.

PostBank appears to be using grant payments to expand its financial services. As Lena Gronbach points out, this is what Net1/CPS did in the past, leading to terrible abuses of grant recipients.

Of the 3.3 million applications that had been declined, almost two-thirds (2.1 million) were because the applicant appeared on the Unemployment Insurance Fund (UIF) database. These failed applications would be reviewed, especially given concerns over the quality of the UIF database.

When? Four months into the lockdown? Five months? Six months?

Who is responsible for this situation? SASSA, DSD or the UIF? No one wants to take responsibility.

It seems clear that the UIF has underperformed repeatedly. Its rollout of unemployment insurance in April was made possible by interventions by business and labour. Last week it had to postpone opening for applications for unemployment payments in June. It blamed ‘technical glitches’.

The UIF has still not paid out emergency payments for 1 million furloughed workers from April and May. The UIF blames the employers for allegedly failing to submit the right information. Business rejects this: it is the UIF’s ‘grossly unreliable’ administrative system that is to blame.

The budget was there

SASSA also shared with the Portfolio Committee projected costings over six months. The budget for the special Covid-19 SRD grant was slashed to R3.5 billion over six months. This was a fraction of the R17 billion budget apparently envisaged in the president’s announcement in April.

The revised budget provided for a total of two million grant payments over May and June combined. By October, the number of anticipated grant payments would rise to 2.7 million. This is less than one third of the figure of eight million payments per month imagined back in April.

This gloomy assessment was corroborated by the slow pace of grant payments in June itself. When Minister of Finance Tito Mboweni gave his emergency budget speech on 24 June, he appeared to adjust the budget for emergency relief from the R50 billion announced in April down to at most R40.8 billion. The difference appears to be due to the poor rollout of the special Covid-19 grant.

Additional budget for social grants of R40 billion – close to one percent of GDP – is no small sum. The supplements to existing social grants over six months will make life easier for many poor individuals and households. Similarly, the temporary payment of unemployment insurance through the UIF-TERS scheme – funded from the UIF, at a cost of about 1% of GDP – is also a substantial redistribution to individuals and households facing hardship due to the lockdown. Moreover, if the pandemic and lockdown persist beyond October, or if economic recovery is slow, then there will be a strong case for extending the emergency payments.

Will anyone take any responsibility?

The national departments of Social Development and Basic Education and the UIF have all massively under-performed. None of them show any willingness to accept responsibility. They all pass the buck.

Perhaps it is time for the President to step in and read the riot act. If the DSD, DBE and UIF cannot step up to the plate, the President should appoint new ministers and a new commissioner who can do the job.

Jeremy Seekings is a professor and Director of the Centre for Social Science Research at the University of Cape Town.