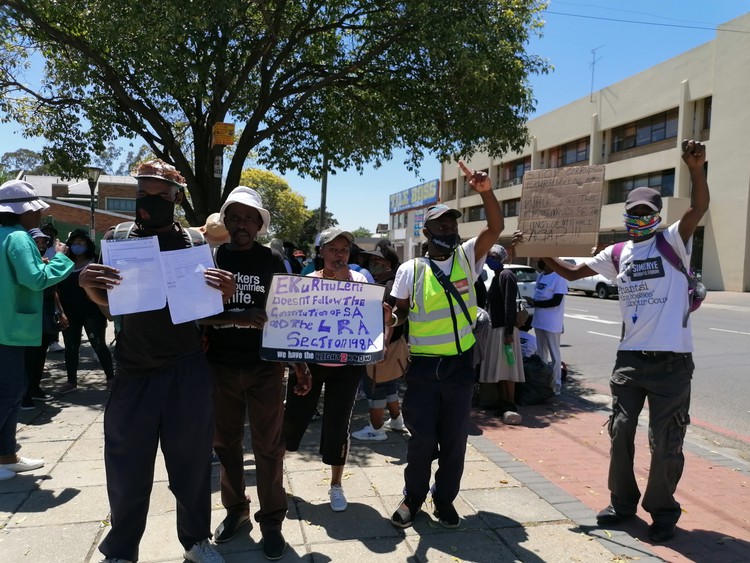 Former Ekurhuleni municipal workers picket outside the customer care centre in Benoni, Gauteng on Thursday, demanding that they be prioritised for jobs in the municipality. Photo: Zoë Postman

“We can’t get any jobs or grants because they say we are currently working for the municipality,” says former Ekurhuleni municipality employee William Gundwane.

He joined about 50 other former municipal workers who picketed outside the customer care centre in Benoni, Gauteng on Thursday, demanding that they be prioritised for jobs in the municipality.

The picket follows a memorandum sent to the Deputy Chief Whip of the ANC in Ekurhuleni two weeks ago. The group decided to picket on Thursday when they did not get a response.

The workers say they are still registered as active employees under the municipality, despite being unemployed since 2016. They were first employed under a job creation programme called Lungile Mtshali Development Plan Project in 2014. They were employed to clean the streets, drains, old age homes, municipal buildings, cemeteries and parks.

The programme ended in June 2015 and the workers’ contracts were terminated. Two months before the termination, the workers approached the South African Local Government Bargaining Council with the help of Lawyers for Human Rights (LHR), arguing that they should be made permanent employees of the municipality.

In December 2015, while the workers were waiting for their case to be heard at the bargaining council, they were hired by a company called Hlaniki Investment Holdings (Hlaniki) to perform the same jobs for the municipality.

In September 2016, returned to the bargaining council. They argued that Hlaniki was acting as a Temporary Employment Service (TES) or labour broker for the municipality when they should have been made permanent after three months.

Both cases were heard at the bargaining council by commissioner Timothy Boyce in May 2018. Boyce found that the municipality should have made the workers permanent and made an arbitration award of R6,000 per worker. He, however, disagreed that Hlaniki was hired as a labour broker. This meant that the workers were not entitled to have their jobs reinstated.

The case was then referred to the Johannesburg Labour Court. On 14 February, the court also dismissed the workers’ case to be reinstated but increased their compensation from R6,000 to R24,000 per worker.

Gundwane said that the Lungile Mtshali and Hlaniki programmes were still operational under the municipality but that other workers were participating in the projects.

“We want to know who those workers are … because we are here and we are suffering. We have been unemployed for close to five years now and we can’t provide for ourselves or our families,” said Gundwane.

Bongiwe Msweli joined the Lungile Mtshali programme in 2014 as a street sweeper. She has been unemployed since her contract ended in 2016. When her daughter died in November 2019, she was left to take care of her three-year-old granddaughter without an income.

City of Ekurhuleni spokesperson Themba Gadebe said: “The Lungile Mtshali is an employment programme Aimed at giving the unemployed skills and experience. Participants in the programme are free to apply for jobs in the city in line with the recruitment policy.”

Previous:  Labour department to visit farm after owners close only crèche nearby