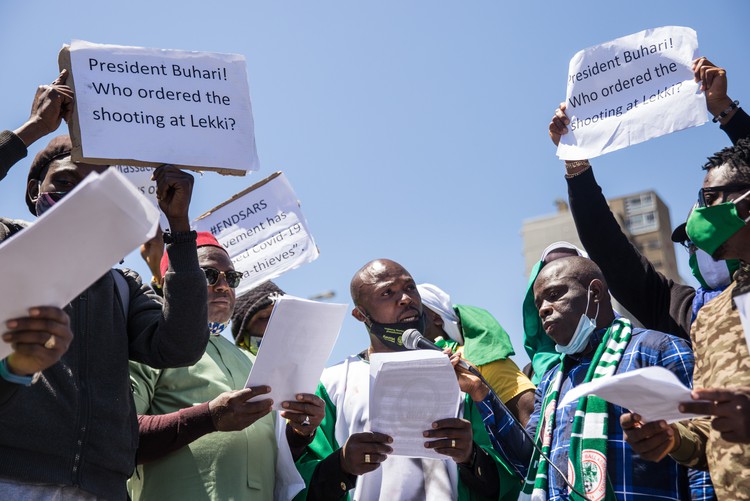 About 30 Nigerians living in Cape Town marched to Parliament on Friday against police brutality in Nigeria. The group are also pleading with South African President Cyril Ramaphosa to intervene in the unrest.

The march follows violent protests earlier this month in Nigeria under the #EndSARS campaign which first surfaced in 2017 as activists in Nigeria sought to abolish a federal police unit called the Special Anti-Robbery Squad (SARS).

Nigerians had been demonstrating nationwide every day for nearly two weeks against the police unit. Human rights groups had for years accused the unit of extortion, harassment, torture, and murders. The unit was disbanded on 11 October, but the protests continued and activists claimed as many as 20 people were killed in one night.

With a Nigerian flag splattered with red paint in hand, some marchers also wore scarves and face masks with the national colours while they were en route to Parliament.

Some placards read: “Injustice in Nigeria does not have another name”, “President Buhari ordered the shooting at Lekki” and “Anti-corruption but Covid-19 food is hoarded”.

Cosmos Echie, president of the Nigerian Community Western Cape, said: “We are here to submit a memorandum of demands to President Ramaphosa, who is also the chairperson of the African Union (AU).

“The youth of Nigeria are tired. We rose against police brutality and bad governance in our country. On 20 October, youths who were in protest were shot at the Lekki toll gate and we expected our president to address the problem, but he was non responsive. When he eventually did respond, he … did not address the core issues.”

Echie said that they have since approached the AU directly for help.

The group’s memorandum was accepted and signed by Victor Ngaleka, the National Assembly Table Procedural Advisor.

It asked the AU to demand that the Nigerian government account for how people at the Lekki Toll Gate were killed. It also called for an international inquiry into the shooting of protesters, for compensation for families of the victims of SARS, and the Lekki Toll Gate killings, as well as compensation to businesses vandalized by “thugs who infiltrated the protests following the actions and inactions of government and politicians”.