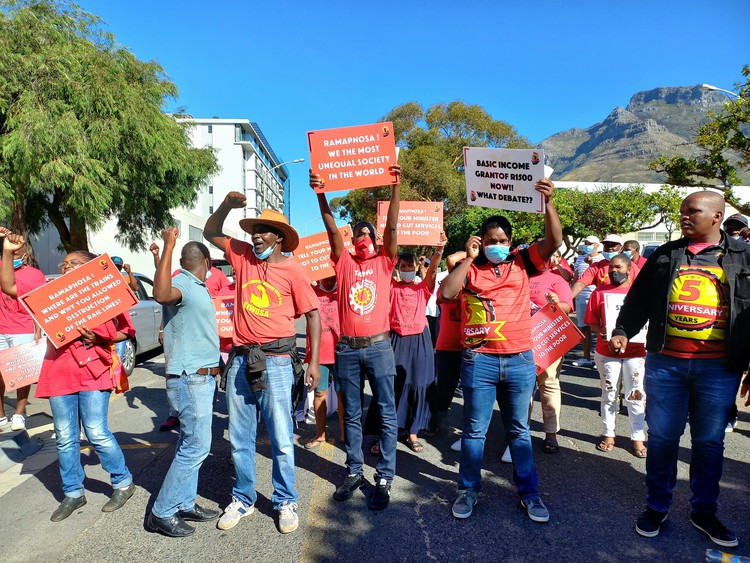 About 50 members of the South African Federation of Trade Unions (SAFTU) picket ahead of the State of the Nation Address in Cape Town on Thursday. They are demanding a R1,500 Basic Income Grant (BIG) and for National Treasury to reverse budget cuts. Photo: Marecia Damons

Members of the South African Federation of Trade Unions (SAFTU) picketed along Keizersgracht Street near the City Hall in Cape Town’s city centre ahead of President Cyril Ramaphosa’s State of the Nation Address (SONA) on Thursday evening.

The demonstrators were clad in red and held up posters calling for the implementation of a R1,500 Basic Income Grant (BIG), more job opportunities for unemployed people, the fixing of the railway system and punishment for corruption in the private and public sector, among other things.

Earlier in the day SAFTU told journalists during a briefing that it was opposed to the government’s proposed budget cuts in the November Medium-Term Budget Policy Statement (MTBPS).

SAFTU general-secretary Zwelinzima Vavi partly blamed the recent closure of parts of Parliament as a result of fires on budget cuts. “Members were not given overtime duty in the parliamentary building on 1 and 2 January to save money. This led to a situation where Parliament was not guarded because the budget had been cut,” said Vavi.

He also criticised the government’s the amount of the special Covid-19 Social Relief Distress Grant which was introduced at the start of the pandemic to assist unemployed people. “R350 is about R11.50 per day that cannot even get you a loaf of bread,” he said.

Vavi also renewed calls for the boycott of all Clover products until the ongoing strike by workers is officially resolved.

Dominic Brown of the Alternative Information and Development Centre (AIDC) said a handful of people earn more than R1 million a year, while more than half the country take home less than R1,335 per month. “This explains why we have such high rates of hunger. There are more than 10 million people who go hungry to bed every week, of which three million are children.”

Brown said the government is “hell-bent” on further privatising the energy and transport sectors in addition to budget cuts which have resulted in an “economy which increasingly favours the interests of the rich, big corporations”.

Mayoyo Mngomezulu, general secretary of the Food and Allied Workers’ Union (FAWU), said the consequences of slashing the CCMA’s budget has meant it can no longer permanently employ commissioners. This has significant implications on its ability to assist workers timeously and independently.

“Those part-time commissioners are the same consultants that are consulting with the employers. This is at the expense of the workers,” said Mngomezulu.

During his speech, Ramaphosa said that government, labour, business and communities have set aside 100 days to finalise a comprehensive social compact to grow the economy, create jobs and combat hunger.

Ramaphosa announced that the R350 Social Relief of Distress grant will be extended until the end of March 2023.

During this time, government will work to identify the best options to replace the grant, he said. “Any future support must pass the test of affordability, and must not come at the expense of basic services or at the risk of unsustainable spending,” he said.

Ramaphosa also vowed to address the poor state of passenger rail in South Africa, saying plans are in place to partner with the private sector to address cable theft and vandalism. “This collaborative effort is already showing results in reduced disruptions to rail operations,” he said

Next:  People queuing for eight hours outside Home Affairs sent home without being helped