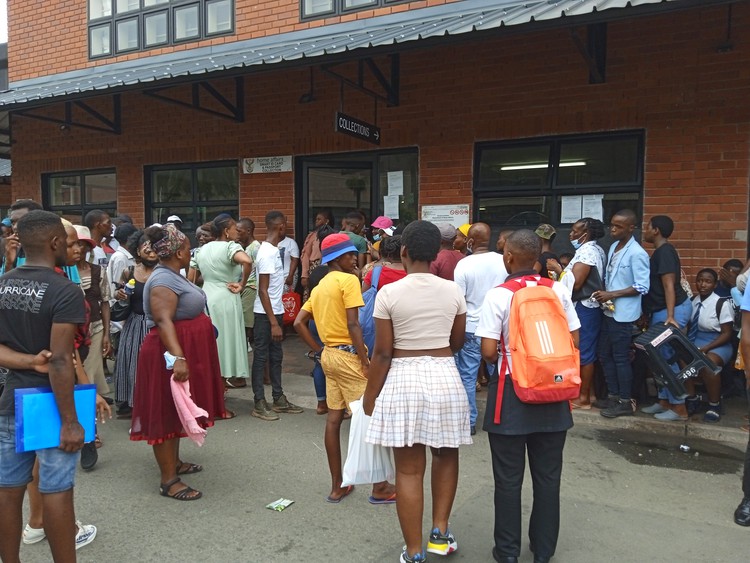 More than 100 people still waiting in line to be served at Home Affairs in Umgeni Road in Durban demanded that they be helped when the office closed early on Thursday. Photo: Nokulunga Majola

Chaos erupted outside the Home Affairs office in Umgeni Road, Durban on Thursday when scores of people demanded assistance after the office closed early at 3:30 pm.

People had been queuing for more than eight hours to apply for IDs and passports, and by late afternoon, the line was still snaking outside. Many people we spoke to were returning for the second and third time without assistance.

About 100 people were still waiting in line outside when they were informed that the office was closing early, as the system was apparently offline. Thereafter an angry crowd tried to stop a state-branded vehicle from leaving the premises.

According to people who were at Home Affairs the previous day, the system had also been offline for most of the day.

“I was here on Tuesday from 7 am but I had to turn back. I returned [on Thursday] because on Wednesday they only serve matrics. This is so frustrating. We don’t understand why we need to spend a whole day here just to collect IDs,” said Buyile Madonsela from Inanda. She said she spends a total of R76 a day for her and her grandson to travel to Home Affairs.

Nomusa Dabula from Quarry Heights said she needs her ID so she can complete her applications to tertiary institutions. “You cannot do anything without an ID. I came on Friday, I had to return home without any assistance. I came again today and it’s the same issue. How many more times must I keep coming here?” asked Dabula.

To quell the crowd outside, District Manager of Operations at eThekwini, Mbongeni Magagula, told them that what had happened was not isolated and that he was “used to addressing an angry crowd of people” because “it happens every day”. He explained that the staff had already left for the day and asked the group to leave because there was no one to assist them.

Some people were given slips of paper with dates on them on when to return but most of them called for the Minister of Home Affairs to intervene.

Questions sent to Home Affairs were not answered by the time of publication.