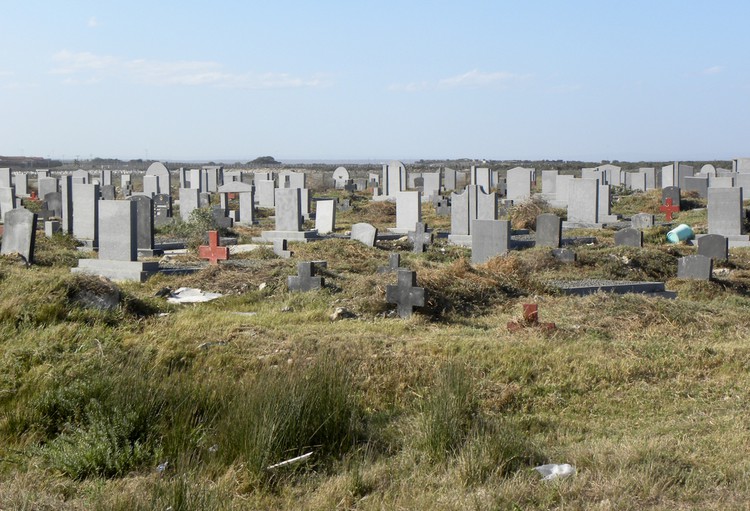 About 3,000 emerging undertaker firms have embarked on a three-day shutdown. (Pictured above is the Motherwell cemetery in Port Elizabeth.) Photo: Joseph Chirume

South Africa’s largest umbrella organisation for undertakers started a three-day shutdown on Monday. It will affect the collection of bodies from homes, public hospitals and mortuaries, and their burial.

The Unification Task Team, which according to its coordinator Peter Matlatle represents about 3,000 emerging undertaker firms, said: “The government has been squeezing us out of this business for a long time by not changing laws that were there during the apartheid regime. The laws favour capitalist monopoly, making it difficult for our members to operate.”

“By nature of the background of our members most cannot afford to operate a fully-fledged mortuary because of the prohibitive costs involved. We want to be allowed to outsource services like provision of bulk fridges in the cold rooms. Outsourcing should be legalised, but the government penalises us if we do so … The government itself outsources it’s mortuary services.”

Matlatle said government should speed up provision of land to emerging undertakers because various municipal by-laws did not allow them to operate mortuaries in certain areas. He said some landlords did not want their buildings to be fitted with big freezers.

Meanwhile, the Funeral Federation of South Africa, representing nine organisations, has distanced itself from the service withdrawal. Spokesperson John Storom said, “We do not see how it can be justified that when they [bereaved families] need us the most, we can turn around and tell them we cannot assist them because we have issues with the government on how the industry is regulated.”

“The reasons that have been put forward are reasonable and are a cause for concern that the industry has been complaining about since time immemorial. We agree with the demands as set forth and strongly believe that they should be addressed with the government.”

National Department of Health spokesperson Popo Maja said: “This action may lead to undesired conditions and risks to public health. All funeral undertakers and mortuary premises used in connection with the preparation, storage and preservation of human remains must be in possession of a valid certificate of competence issued by the relevant local authority.”

He said legal action will be taken against owners of premises found to be in contravention of the regulations.

“We further call upon members of the public to report any illegal operations to ensure the public can be protected from potential risks and the spread of communicable diseases as a result of poor management of human remains.”

What’s behind the protest?

Why have thousands of undertakers taken the drastic step of shutting down for three days in protest against government regulations?

There are strict Department of Health regulations for undertakers, especially when it comes to the storage of bodies. Municipalities are responsible for inspecting undertakers and issuing them with certificates of compliance.

Many small operators, especially in townships, do not have the means to store bodies on their properties. So they lease refrigerator space from bigger undertakers. Some municipalities are okay with this, but some believe it is against the regulations and won’t issue certificates to undertakers who are leasing refrigerator space off site.

Government and industry have had discussions on how to resolve the regulations but the Covid pandemic slowed progress. Then on top of it, the health department needed to find out more information about undertaker capacity from municipalities. This likely increased the number of inspections during the pandemic and consequently increased tensions with the small undertaking companies, resulting in the shutdown that is now taking place.

Next:  700 residents have a litre of water per day in Eastern Cape village

Previous:  “We will hit them where it hurts” warns NEHAWU leader