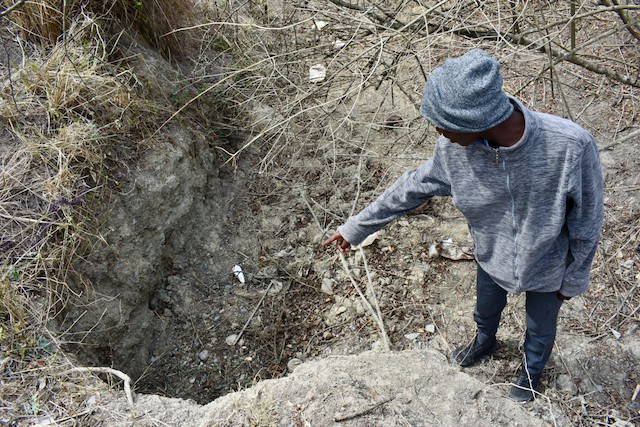 A villager from Khwanyana shows the dry river where they used to get water. Photo: Buziwe Nocuze

More than 700 residents in Khwanyana village, about 40km outside Port St Johns, Eastern Cape, share just two 5,000-litre water tanks. According to the ward councillor as well as residents the tanks are filled irregularly, sometimes once every two weeks, which comes to just over one litre of municipal water per person per day.

“We had a water crisis way before Covid-19 … People are not stressing about water to wash their hands but to cook and drink,” said resident Nomfuneko Sawule.

“We are not doing what the president said [washing hands],” said a resident. “Not because we don’t want to, but because we do not have water.”

Sawule said they need more tanks and they needed them to be filled at least twice a week.

Many children do not go to school because they have not been able to bathe and their uniforms are dirty.

Mthobeli Gwiba said people pay between R200 and R300 to get water, hiring a vehicle to go to Tombo about 20 kilometres away, where there is still municipal water supply. Unemployed people cannot afford this.

“No one fetches water for free. They all want the money,” said Lulama Sajini. “People who own donkeys are charging R60 for 20 litres of water [fetched from a nearby area].”

Several residents said their ward councillor needs to do much more.

Port St Johns Local Municipality Ward 3 Councillor Zolile Maqina (ANC) said, “I know that the two tanks are not enough for the whole community but there is nothing else that I can do … It will not happen that the community gets water every week. It is not possible.”

He said Khwanyana was lucky with two tanks; other areas only had one tank.

“Residents need to take some blame,” said Maqina. He said the Lundini Ludalasi water project, started in 2014 for Khwanyana, Ludalasi, Mngazana and part of Mbenengeni village, failed because the pump station was vandalised and taps were stolen. A security guard was hired to work at night, but people started stealing the water infrastructure during the day.

Maqina said people had also lost livestock because of the water shortage.

“We are pleading with anyone who can assist us to come forward before we all die, because no one can live without water,” said Maqina.

Next:  Shack owner sent away after boy is electrocuted by izinyoka connection