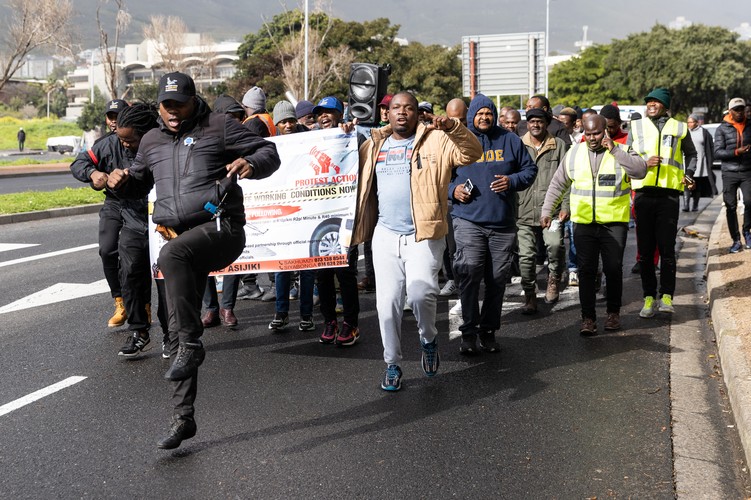 Uber and Bolt drivers stopped work this week, demanding an end to a freeze on operating permits, and a drop in the percentages taken off their pay by the companies they work for. Photo: Ashraf Hendricks

Since the beginning of 2022, nearly 2,000 e-hailing vehicles without operating permits were impounded by the City of Cape Town’s traffic services. These were vehicles belonging to drivers for Uber, Bolt, and inDriver, who are not able to get their permits because of a freeze on the issue of new permits by the City.

Some Uber, Bolt and inDriver drivers went on strike on Wednesday and Thursday, demanding an end to the freeze on permits and to the impounding of their cars. According to traffic services spokesperson Maxine Bezuidenhout, 1,936 vehicles have been impounded this year.

The drivers also want the commissions the companies take off their fares to be reduced to 10%. Uber currently takes 25% and Bolt 26%.

The drivers, some of whom protested outside Uber offices and the Cape Town Civic Centre, also want a minimum fare of R40 and a rate of R10 a kilometre.

Lists of demands were handed over to Uber, Bolt, inDriver, and the City of Cape Town by the Western Cape E-Hailing Association, which organised the protest. Deputy Chair of the association Samy Bala said that just over 1,000 members were not working.

Drivers cheered as the memorandum was read outside the Uber offices in Cape Town.

At the Civic Centre, about 50 protesters were met by Rob Quintas, the City’s Mayco Member for Urban Mobility. Quintas told them he had noted their grievances and the City was “moving at a very rapid pace” on the permit issue.

He said that the City was developing an app for e-hailing drivers that would be ready in September. It would allow the City to get data on the demand for e-hailing services in Cape Town in order to determine how saturated the market is and if more permits should be supplied.

In response to GroundUp queries, Quintas said that the freeze on new permits, imposed in February 2021, was necessary “to ensure the long-term sustainability of the metered-taxi industry”. He said the number of metered-taxi operating licences had increased from 685 in 2015 to about 4,300. (The metered-taxi industry includes e-hailing services in this context.)

Uber driver Larry Matare said he had been trying since 2017 to get an operating licence. He said he had lost count of how many times he has applied and has been refused. Now, he doesn’t drive at weekends because the risk of having his car impounded by traffic officials is higher.

Bala of the Western Cape E-hailing Association said a large number of drivers are driving without permits. “The drivers are suffering … Your car can stay in the impound area for a week. Which means you don’t work for a week,” he said. 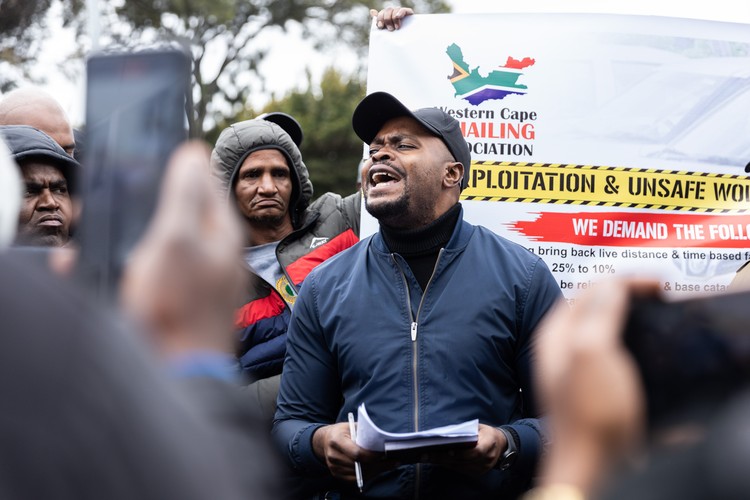 Samy Bala, Deputy Chair of the Western Cape E-Hailing Association said that Uber doesn’t take its drivers seriously and that the company only reacts when they protest. Photo: Ashraf Hendricks

In response to questions from GroundUp, Uber South Africa spokesperson Mpho Sebelebele said that the company had been open to engaging with the e-hailing association to “find workable solutions” but was disappointed that the drivers “are not willing to engage with us at this time, and only after the protest”.

She said that Uber is aware of the pressures drivers face with increasing fuel prices, but that fares fluctuate depending on the season.

Uber driver Matare, who used to work for Bolt, said driving for Bolt was “dangerous”. He said clients could “rob you without a trace” because so little information is needed to create a customer profile and request a trip.

In response to questions from GroundUp, Takura Malaba, the Country Manager at Bolt SA, said the company would continue to engage with drivers to better understand their grievances. “Driver safety is a top priority for Bolt, and we unequivocally condemn any violence of any form directed towards ride-hailing passengers or drivers.”

Uber in South Africa does not consider the drivers to be employees. A disclaimer in the response from Uber read: “Please note that drivers operate as independent contractors, so please refrain from using terms such as ‘work for Uber’ and referencing drivers as ‘Uber drivers’ or ‘Our drivers’, and rather use ‘drivers on the Uber platform’ or ‘drivers that use the Uber app’.”

But in other countries drivers have been considered to be employees.

In 2019, France’s Court of Cassation, equivalent to the Constitutional Court, ruled that a former Uber driver was in an employment relationship with the company, and should not have been considered a “self-employed partner”.

In 2020, the Pennsylvania Supreme Court in the United States also ruled that an Uber driver was an employee, and entitled to unemployment benefits.

In 2021, the Amsterdam District Court ruled that Uber drivers were employees, and entitled to benefits in line with their status.

In 2021, the Supreme Court of the United Kingdom also found that Uber drivers should be considered workers of the company, and not self-employed.

Next:  There are snakes, flash floods and no basic services at Marry Me informal settlement