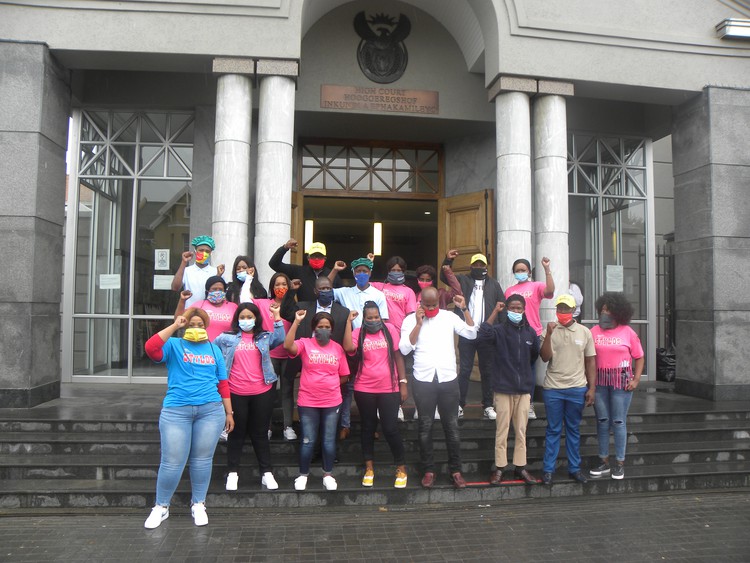 Some of the workers who were suspended by Truda Foods in Queenstown stand at the entrance to the Port Elizabeth High Court where the Labour Court sat on Thursday. Photo: Joseph Chirume

A group of former Truda Foods employees who were suspended for “liking” a controversial Facebook post by a community association will have to wait until next month for the court to rule on the company’s interdict against them.

In October, more than 80 workers at the snack manufacturing company based in Queenstown were suspended. About half of them were suspended for joining an unprotected strike that took place weeks earlier and the rest for allegedly responding to a discussion on a Facebook page owned by the Komani Residents Association (KORA).

The workers are also members of the South African Security and Allied Workers Union (SASWU) which Truda has refused to recognise as an official union representing its workers.

Truda Foods was granted an interim interdict on 21 October against some of the suspended workers by the Port Elizabeth Labour Court after workers went on a strike demanding better working conditions earlier that month. The interdict is to stop KORA, SASWU and some of the suspended workers from making defamatory statements against the company and from intimidating staff still working at Truda.

On Thursday, Truda headed back to the Labour Court to have the interim interdict, which expired on 5 November, made permanent. The case was postponed to 9 December to give Truda’s team more time to prepare its argument.

SASWU general secretary Xolile Mashukuca said that Truda refused to negotiate with them or KORA. He said there was no basis for the interim interdict to be made permanent.

“Even other companies in Komani have urged Truda Foods to sit down with us and discuss workers’ grievances which we have tabled quite some time ago,” said Mashukuca.

Olwethu Samente worked in Truda’s maintenance department before he was suspended for leading the strike in October. He was the chairperson of SASWU at the time.

“The company officials tried with no success to set up a workers’ committee which they handpicked themselves. This was after we had raised several issues about poor safety conditions at the factory. We reported the company to the fire department of the Enock Mgijima Municipality and the Labour Department for cases of workers who got injured on duty,” he said.

In response to the claims made by the workers, Truda Foods CEO Colin van Heerden accused SASWU and KORA of trying to extort money from the company by forcing it to recognise them as official representatives of the workers and the community.

“What is taking place at our Komani plant is a form of criminal extortion. Three individuals are claiming to represent the people of Komani. They are self elected and were expelled from the legitimate KORA for fraud. They approached Truda Foods wanting a cut in the taxi contract, a fee for employment contracts and fees for community liaison. They were focused on self-enrichment,” he said.

Van Heerden said the claims made by the workers were false and were part of a smear campaign after the company refused to recognise them.

“Their actions resulted in 80 people being without work and another 900 people having their wages cut. They are not interested in the collateral damage from their criminal behaviour,” said Van Heerden.

Next:  Steve Tshwete Stadium collapsing and taking local sport with it