Telling the Covid-19 story with puppets 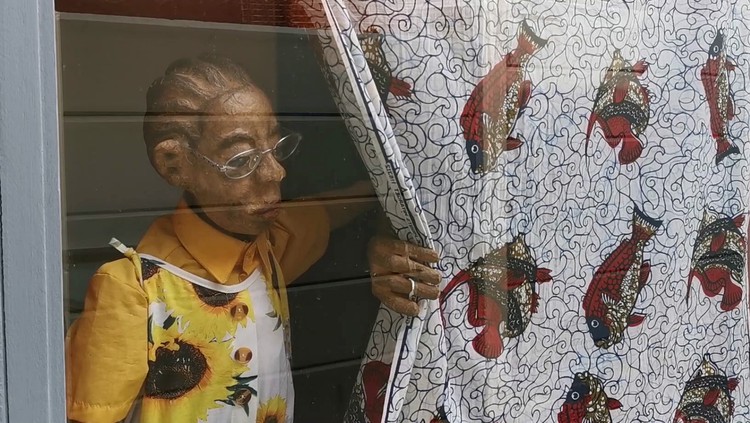 Ukwanda’s new short film tells the Covid-19 story with wooden puppets. Here, 14-year-old Nande looks out from her window, wondering where her elderly neighbour is. Photo from film

The film, The New Normal Life, focuses on 14-year-old Nande, who is worried when her 65-year-old neighbour, Tatu Zulu, stops coming out in the morning to feed his dogs and drink tea outside his home. The story revolves around the conversations between Nande and her mother, who explains that Zulu has tested positive for Covid-19, and is in quarantine. They discuss Nande’s concerns about the virus, its symptoms, and how to remain safe by using sanitiser and wearing a mask properly. The dialogue is a mix of English and isiXhosa, with English subtitles.

Luyanda Nogodlwana, who is the puppeteer for the mother in the film, said the puppeteers had been in Germany in March working on a new project but had to return because of the pandemic. When they arrived back in South Africa they were surprised that people were not taking Covid-19 seriously. “People weren’t wearing masks,” he said.

“We were inspired by this problem that the whole world is facing,” said Sipho Ngxola, director of the film. He said Ukwanda wanted to help children who might go back to school and were not properly informed about the virus. “There isn’t enough information out there,” he said.

“Not every parent is educated to educate their children,” said Siphokazi Mpofu, who is the puppeteer for Nande.

The puppets used in the film were made and designed by the collective in 2017 for their previous theatre production Warona, a Rose among the Thorns. But Mpofu said that making a film was very different to live theatre. Instead of performing for the audience, who don’t really mind seeing the puppeteers themselves, she says, in film the puppeteers must perform for the camera. This means the puppeteers must be hidden, as the viewer might confuse them for characters.

In live performances, at least two people control the puppets. In the film, each puppet was controlled by one person, and movements like putting on a mask were very difficult, says Mpofu.

The Ukwanda Puppet and Designs Art Collective was born out of the Handspring puppet company where Mpofu, Nogodlwana and Ngxola were apprentices.

The film took three months to complete and was made in association with the University of the Western Cape Centre for Humanities Research and was entirely self funded. The 20-minute film can be watched on YouTube.

Next:  Fined for going to a clinic during lockdown

Well done for featuring this story

Thanks so much for carrying this story. The question of educating children about the Covid virus has been much neglected. Thanks to Ukwanda and the CHR at UWC for this wonderful work in helping translate the world we live for younger children. It is a major oversight in the national communication strategy by state, civil society organisations and educational institutions. Thank you.